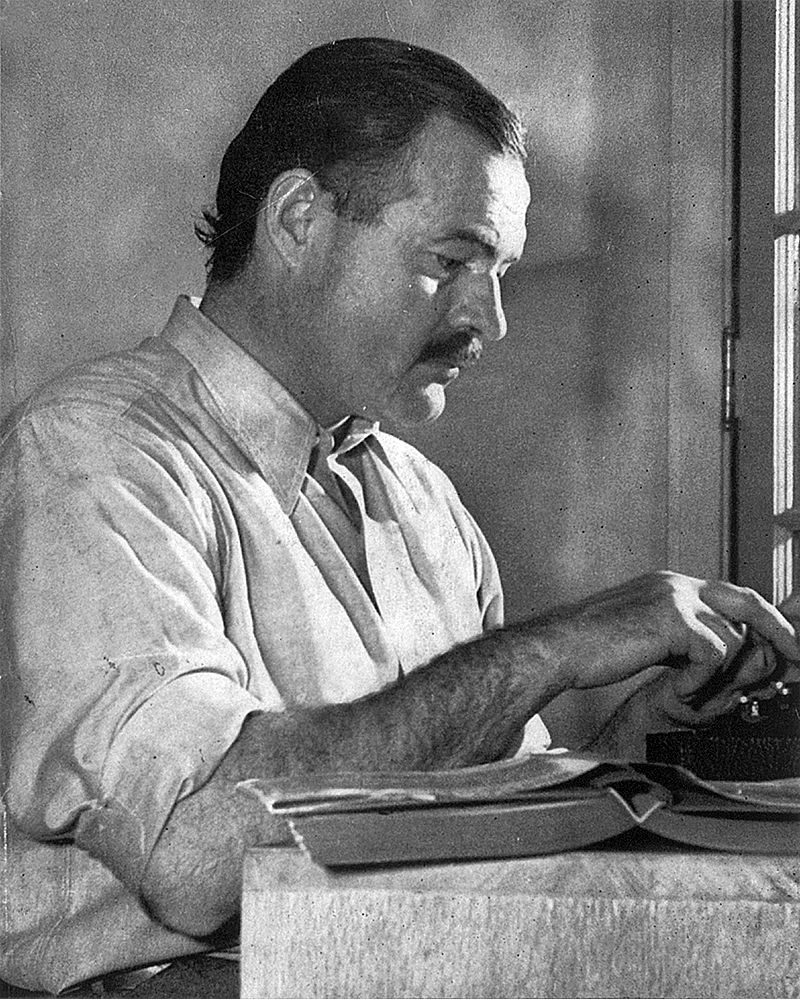 Hemingway never wrote a treatise on the art of writing fiction.  He did, however, leave behind a great many passages in letters, articles and books with opinions and advice on writing. Some of the best of those were assembled in 1984 by Larry W. Phillips into a book, Ernest Hemingway on Writing.

We’ve selected seven of our favorite quotations from the book and placed them, along with our own commentary, on this page. We hope you will all–writers and readers alike–find them fascinating.

Hemingway had a simple trick for overcoming writer’s block. In a memorable passage in A Moveable Feast, he writes:

Sometimes when I was starting a new story and I could not get it going, I would sit in front of the fire and squeeze the peel of the little oranges into the edge of the flame and watch the sputter of blue that they made. I would stand and look out over the roofs of Paris and think, “Do not worry. You have always written before and you will write now. All you have to do is write one true sentence. Write the truest sentence that you know.” So finally I would write one true sentence, and then go on from there. It was easy then because there was always one true sentence that I knew or had seen or had heard someone say. If I started to write elaborately, or like someone introducing or presenting something, I found that I could cut that scrollwork or ornament out and throw it away and start with the first true simple declarative sentence I had written.

There is a difference between stopping and foundering. To make steady progress, having a daily word-count quota was far less important to Hemingway than making sure he never emptied the well of his imagination. In an October 1935 article in Esquire ( “Monologue to the Maestro: A High Seas Letter”) Hemingway offers this advice to a young writer:

3: Never think about the story when you’re not working.

Building on his previous advice, Hemingway says never to think about a story you are working on before you begin again the next day. “That way your subconscious will work on it all the time,” he writes in the Esquire piece. “But if you think about it consciously or worry about it you will kill it and your brain will be tired before you start.” He goes into more detail in A Moveable Feast:

4: When it’s time to work again, always start by reading what you’ve written so far.

The best way is to read it all every day from the start, correcting as you go along, then go on from where you stopped the day before. When it gets so long that you can’t do this every day read back two or three chapters each day; then each week read it all from the start. That’s how you make it all of one piece.

5: Don’t describe an emotion–make it.

Hemingway was contemptuous of writers who, as he put it, “never learned how to say no to a typewriter.” In a 1945 letter to his editor, Maxwell Perkins, Hemingway writes:

It wasn’t by accident that the Gettysburg address was so short. The laws of prose writing are as immutable as those of flight, of mathematics, of physics.

Note: An earlier version of this post appeared on our site in February 2013.