The Lifespan of Ancient Civilizations Detailed in a Handy Infographic: Are We Headed Towards Our Own Collapse? 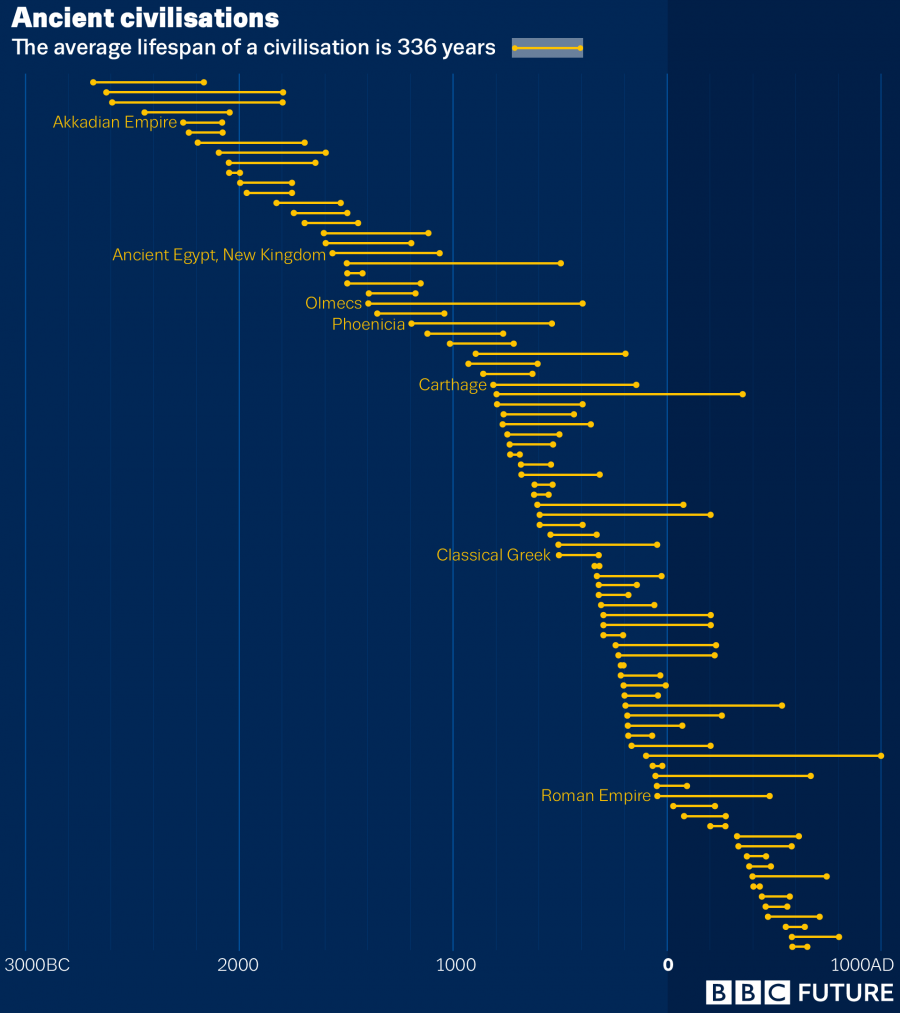 Anyone living in the West today surely feels they’ve heard quite enough about its decline. (Unless, of course, they’re fans of 1980s punk rock.) Given how long civilizations usually outlive individuals, how can an individual grasp the prospects for longevity of the civilization in which they find themselves? History, a discipline which has long had everything to do with charting the rise and fall of settlements, cultures, and empires, can provide the context necessary for understanding, but more of it has been written than even a human with the lifespan of a civilization can digest. Come to provide some clarity is Luke Kemp of Cambridge’s Centre for the Study of Existential Risk, creator of the infographic above. View it here in a larger format, courtesy of the BBC.

“There is no strict definition of civilisation,” Kemp admits, “nor an overarching database of their births and deaths.” This forced him to come up with his own definition for this infographic: “as a society with agriculture, multiple cities, military dominance in its geographical region and a continuous political structure. Given this definition, all empires are civilisations, but not all civilisations are empires.”

What comes at the end of virtually all of them, he calls a collapse: “a rapid and enduring loss of population, identity and socio-economic complexity. Public services crumble and disorder ensues as government loses control of its monopoly on violence.”

When civilizations have collapsed, as they’ve done with fair frequency over the past five millennia, “some recovered or transformed, such as the Chinese and Egyptian. Other collapses were permanent, as was the case of Easter Island. Sometimes the cities at the epicentre of collapse are revived, as was the case with Rome. In other cases, such as the Mayan ruins, they are left abandoned as a mausoleum for future tourists.” The Roman Empire, “the victim of many ills including overexpansion, climatic change, environmental degradation and poor leadership” before its sacking by the Visigoths in the year 410 and the Vandals in 455, has come up especially often in current discussions about the fate of the America-led Western — or even global — order.

The Roman Empire, as we can see on Kemp’s infographic, lasted 525 years: much longer than the Akkadian Empire, which lasted 187 years, but less than half as long as the African Aksumite Empire, which lasted 1100. “We may be more technologically advanced now,” Kemp writes,” but this gives little ground to believe that we are immune to the threats that undid our ancestors. Our newfound technological abilities even bring new, unprecedented challenges to the mix. ” Kemp names among the possible factors in the next big collapse climate change, environmental degradation, inequality and oligarchy, as well as plain randomness and bad luck. Given the inevitability of collapse, perhaps we can only hope that our civilization is ultimately succeeded by a superior one. But then, Kemp adds, ” “We will only march into collapse if we advance blindly. We are only doomed if we are unwilling to listen to the past.”

M.I.T. Computer Program Alarmingly Predicts in 1973 That Civilization Will End by 2040