With the holidays fast approaching, two interns at the Sallie Bingham Center for Women’s History and Culture at Duke University’s Rubenstein Library turned to the center’s collection of vintage advertising cookbooks for inspiration.

Their labors, and the fruits thereof—a queasy-looking Crown Jewel Dessert and a savory fish-shaped “salad” as per the Joys of Jell-O Gelatin Dessert cookbook—are showcased above.

While the library has yet to digitize that particular early-60’s gem, there are plenty of other options from the Nicole Di Bona Peterson Advertising Cookbook Collection available for free download, including several that are gelatin based. 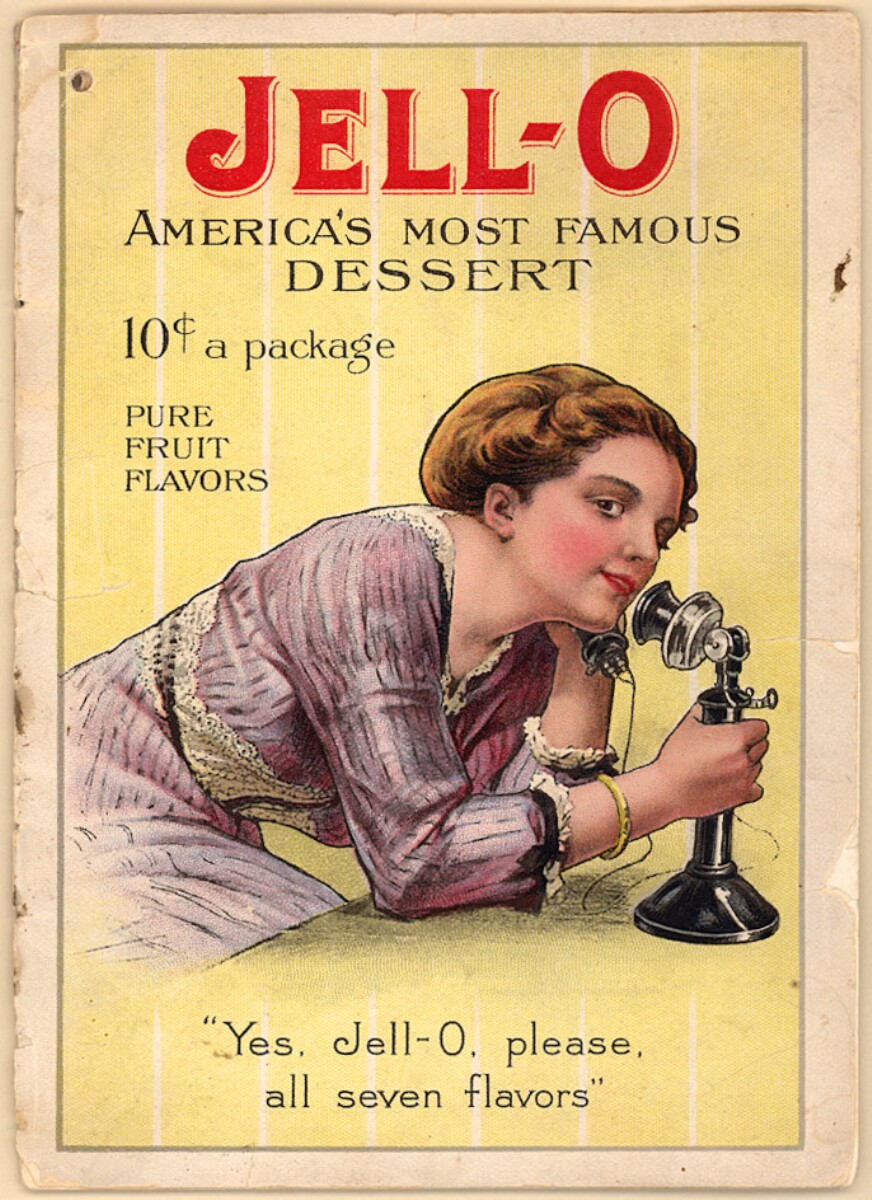 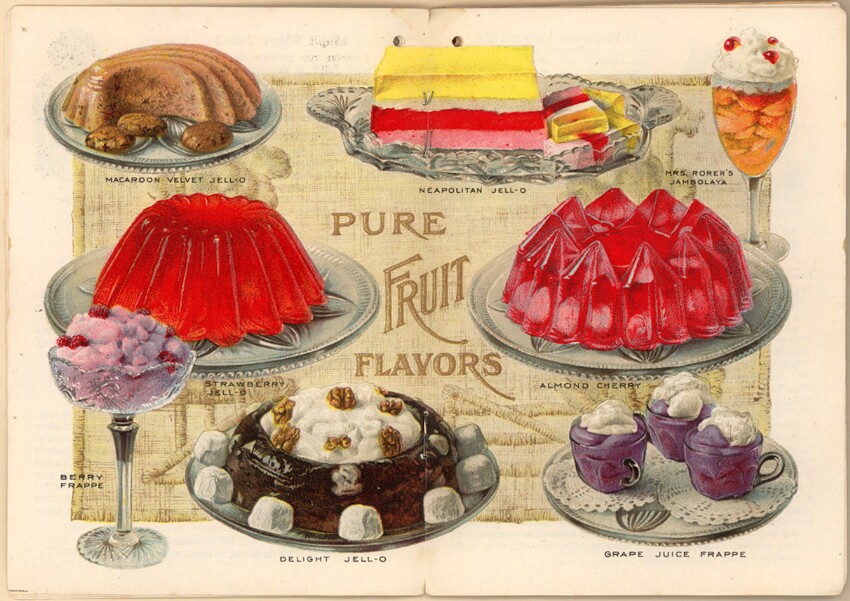 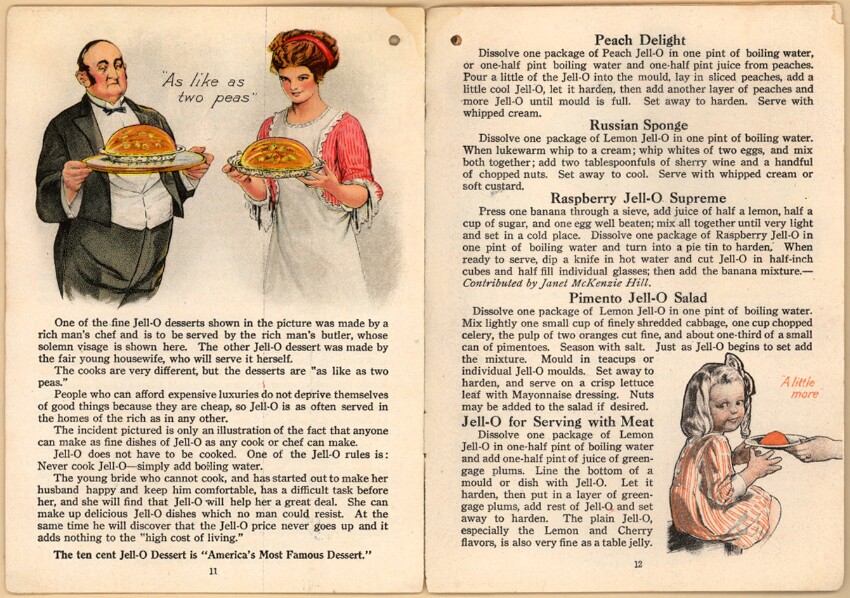 The authors of the pre-Women’s-Suffrage Jell-O: America’s Most Famous Dessert, would have boggled at our 21st-century abundance of flavors (and our godlike telephones), just as our eyes widen at their lush full-color illustrations and hundred-year-old social norms.

As one might expect, given the Sallie Bingham Center’s mission of preserving printed materials that reflect the public and private lives of women, past and present, these vintage cookbooks speak to far more than just culinary trends. 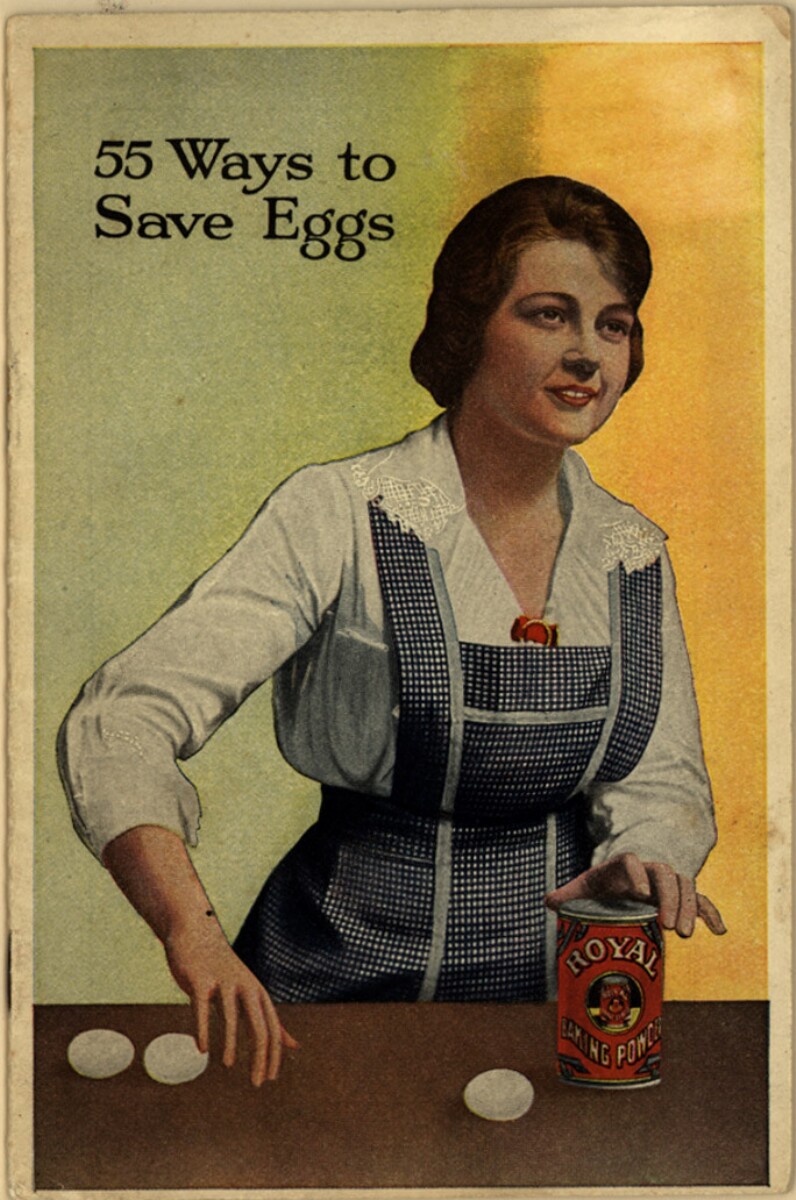 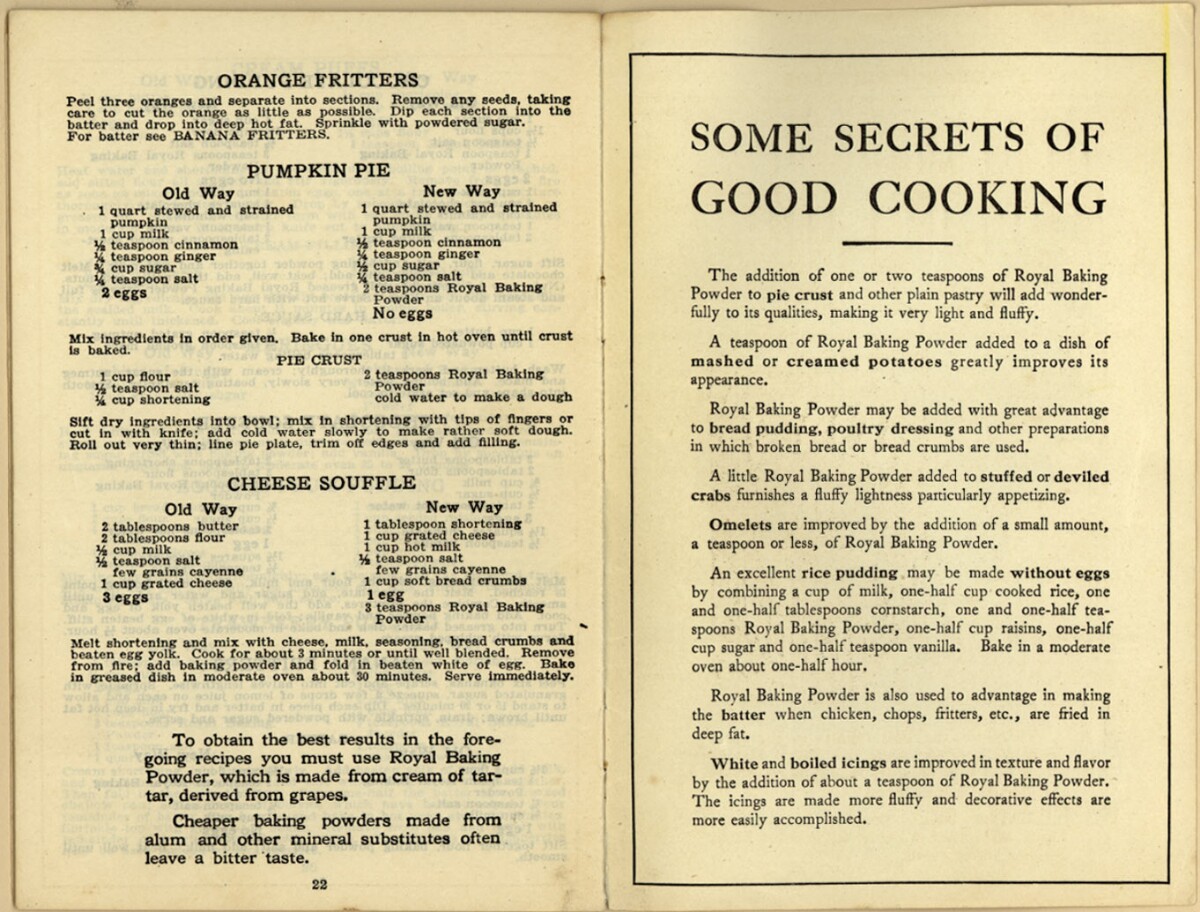 Royal Baking Powder’s 55 Ways to Save Eggs puts a positive spin on wartime economies by framing cheap ingredient substitutions as something clever and modern, attributes the young housewife depicted on the cover would surely wish to embody. 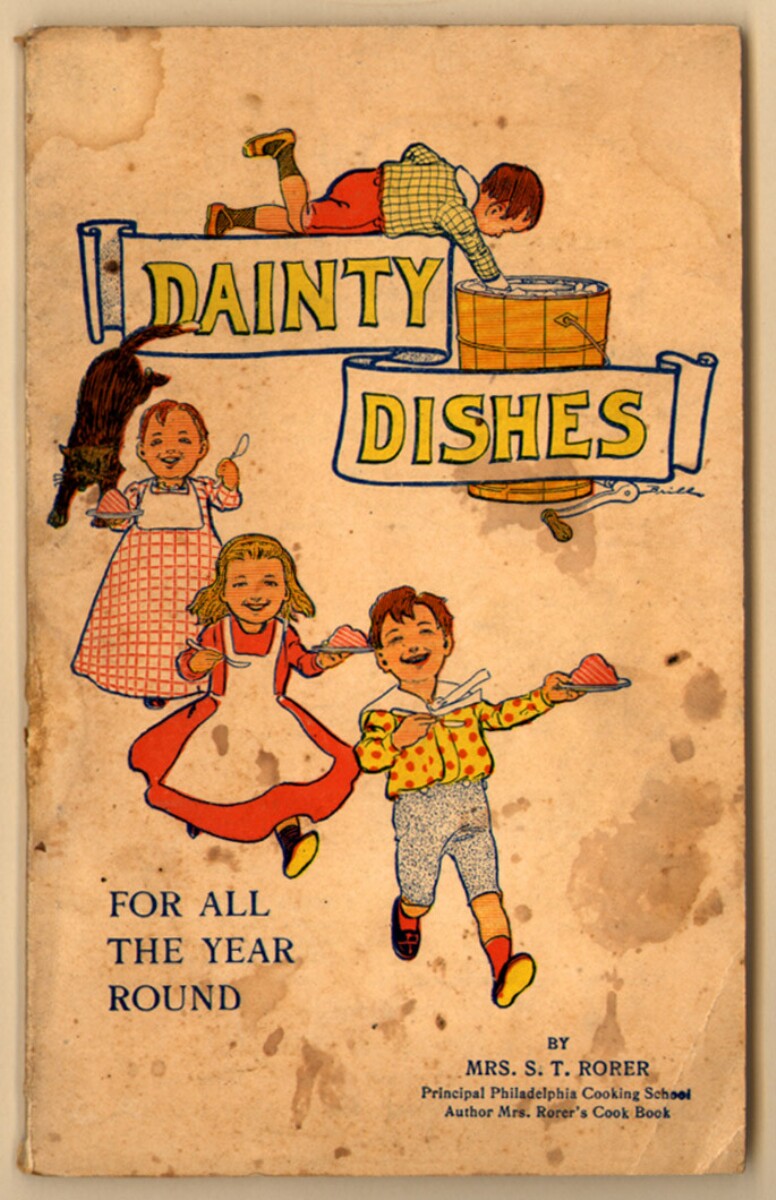 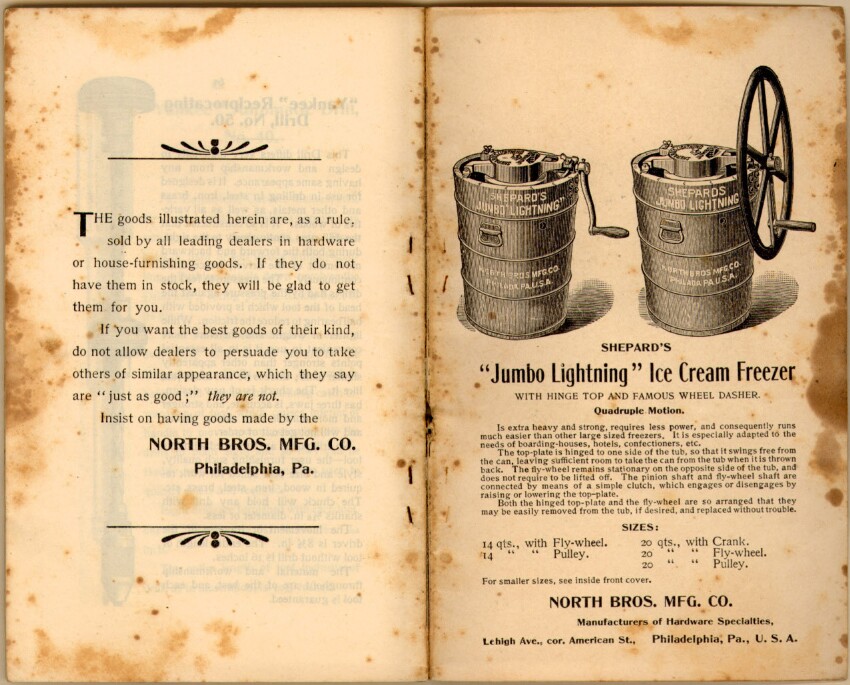 Dainty Dishes for All the Year Round (1900) finds its publisher, North Brothers Manufacturing Co., sitting pretty, unable to imagine a future some twenty years hence, in which technological advances would result in the commercial mass production of ice cream, thus damning their star item, Shephard’s “Lightning” Ice Cream Freezer, to the category of inessential countertop clutter.

Sadly, not all of the delicious-sounding ice cream recipes by Mrs. S. T. Rorer, a leading culinary author and educator and America’s first dietician, are included, but you can browse many illustrated ads for North Brothers’ built-to-last goods, including a meat cutter, a number of screwdrivers, and a magnificently steampunk Christmas tree stand. 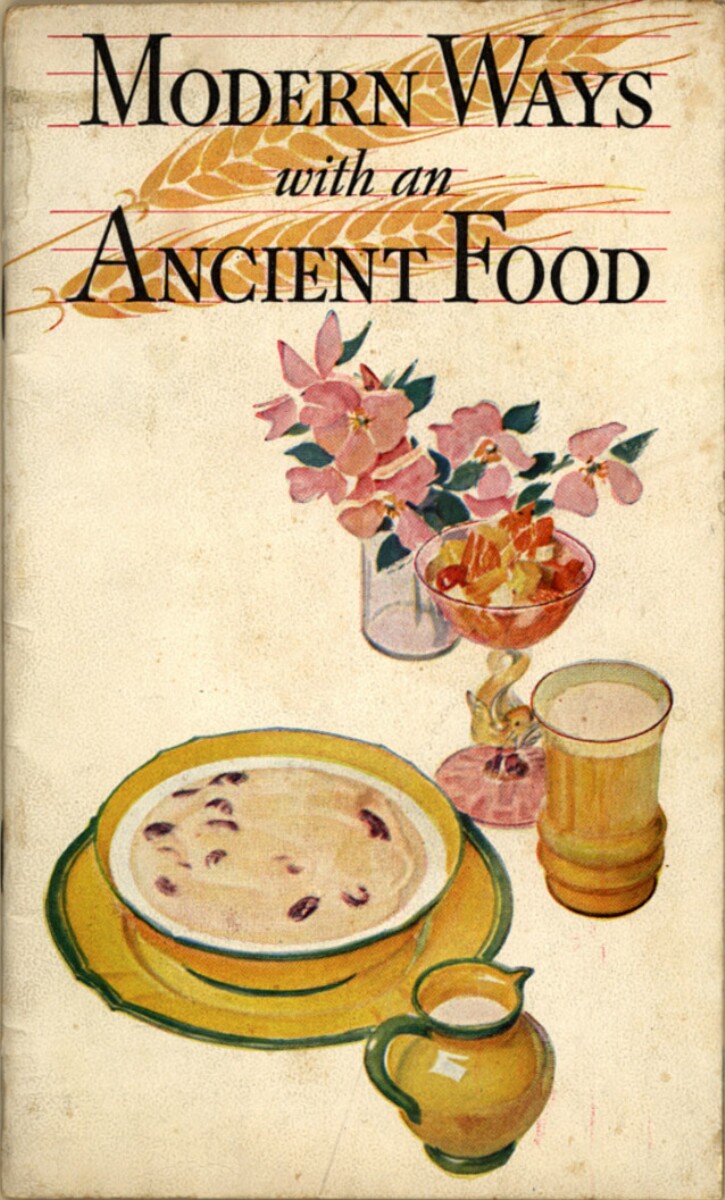 Would it surprise you to learn that our current preoccupation with ancient grains is far from a new thing?

1929’s Modern Ways with an Ancient Food was aimed squarely at mothers anxious, then as now, that their children were properly nourished.

The grain in question was not quinoa or freekeh, but rather farina, referred to by most Americans by its most popular brand name Cream of Wheat, a fact  not lost on this volume’s publisher, Cream of Wheat competitor Hecker H-O Company.

Given the blandness of the grain in question, chalk it up to Cream of Wheat’s muscular advertising approach, and robust licensing of products featuring the iconic image of Rastus, a smiling black spokeschef whose palpably offensive, dialect-heavy endorsements are one pitfall Hecker seems to have skirted. 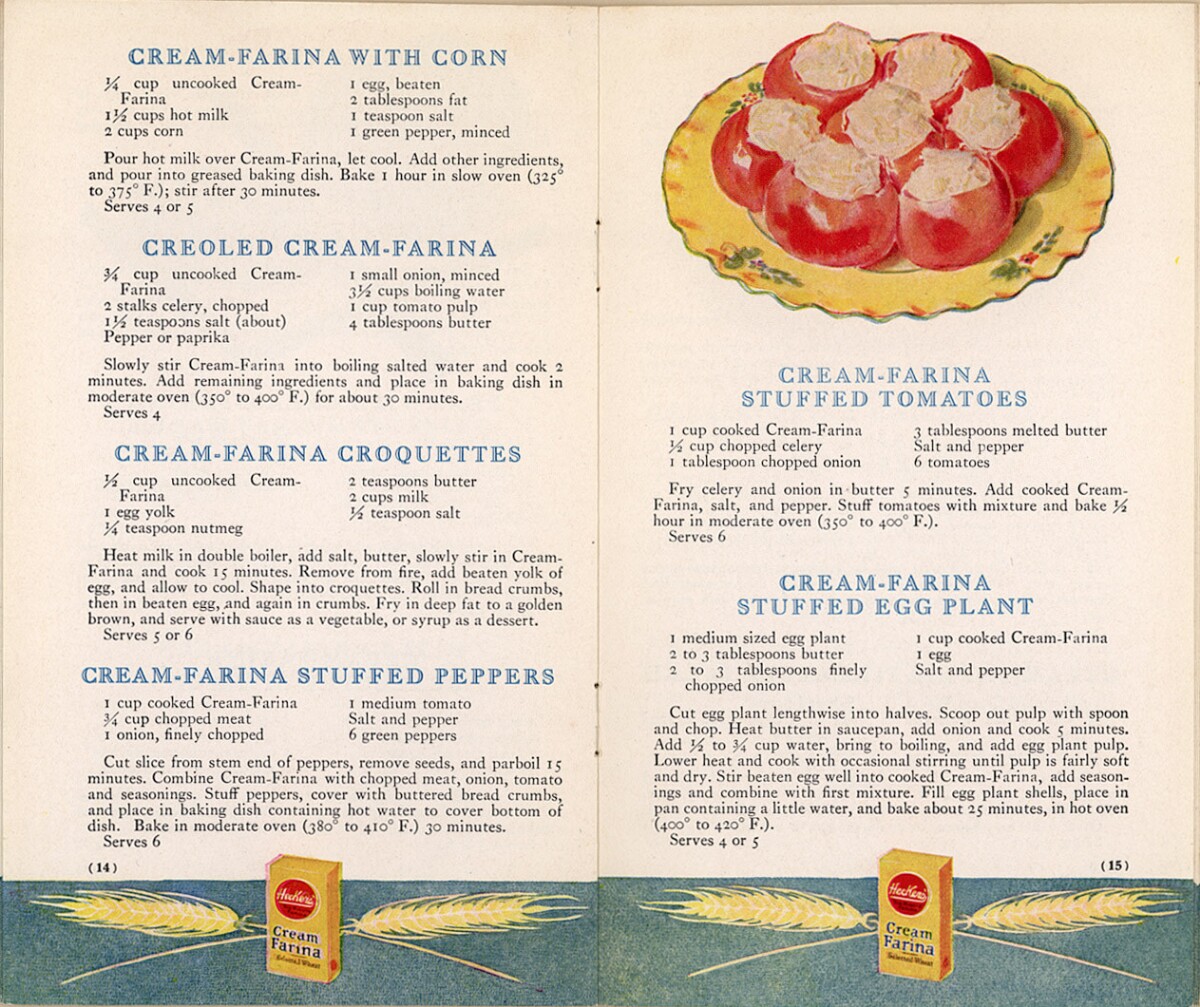 Begin your explorations of the Sallie Bingham Center’s Nicole Di Bona Peterson Advertising Cookbook Collection here, and let us know in the comments if there’s a recipe you’re intending to try.