The lack of human presence in majorly polluted cities these past couple months has had some people seeing utopias as the skies begin to clear. But empty cities seem a little more dystopian to me. Dystopias are “a kind of surrealism,” writes Kim Stanley Robinson. They unearth the dreamlike dread beneath the veneer of the normal. No matter when they’re set, dystopias don’t depict the future so much as “the feeling of the present… heightened by exaggeration to a kind of dream or nightmare.” The events in dystopian fiction approach the truth of someone’s situation somewhere in the world and make visible what has been hidden.

We know ghost cities exist as ancient disasters like Pompeii and Herculaneum and modern ones like Pripyat, Ukraine, outside Chernobyl. But there are more of them than many of us know. Gleaming cities like Ashgabat, Turkmenistan, which broke ground in 1991 and contains the largest number of marble buildings in the world.

The 4.5 million square meter metropolis has almost no inhabitants, an enormous government folly. Towns and cities around the world have been abandoned for for all sorts of reasons, and they continue to as sea levels rise. Which is what makes viewing live camera footage of some of the world’s most iconic streets—almost completely emptied by the pandemic at the height of tourist season—so… surreal.

It’s true that people haven’t fled these cities, but made cozy bunkers of their apartments. Yet seeing the vacant streets live on camera, in Venice, London, New York, and elsewhere in the world,  I get the uncanny feeling of looking at proto-surrealist painter Giorgio de Chirico’s The Enigma of a Day, a depiction of a shadowy, uninhabited street through which we expect the Italian version of a tumbleweed to roll. Surveillance technology has inadvertently become a medium of modernist art.

There is so much beauty in the live view at the top of the Ponte delle Guglie in Venice from the Hotel Filù Venezia, and there is also such lonely melancholy, depending on the time of day and where the shadows fall. See a live view of Times Square, above, and another Times Square view at EarthCam, where you can also catch a feed of a mostly empty Abbey Road (some times of day emptier than others, as in the early-morning screenshot below). Skyline Webcams hosts even more live camera views of Venice, including feeds from the Rialto Bridge and the Piazza San Marco, as well as live feeds from several sites in Padua and other places in Italy. 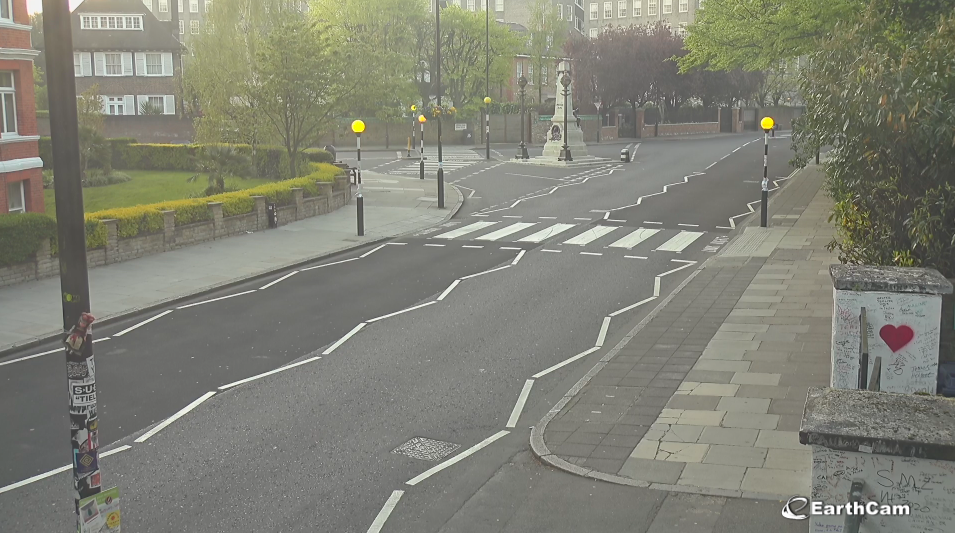 These real-time visions are transporting in their strangeness. Are we living in the present or the future? In a dystopian world, there isn’t any difference. All futures are foreclosed by catastrophe, “all distances in time and space are shrinking,” wrote Martin Heidegger, a thinker who understood disaster, and who fell in line behind it. In that same essay, “The Thing” (as translated by Albert Hofstader), the German philosopher made his famous comment, “the terrible has already happened.”

The terrible that has happened to us is not only a deadly pandemic. The virus is not likely to disappear on its own; who knows how long this will go on? But not far behind the current crisis are more climate events that threaten to empty streets. If we empty cities not only as indicative of temporarily social distancing, but as images of the possible near-future, maybe we’ll be far less inclined to come out of this surreal experience and get right back to business-as-usual.