An Animated Reading of “The Jabberwocky,” Lewis Carroll’s Nonsense Poem That Somehow Manages to Make Sense

“I can explain all the poems that ever were in­ vented—and a good many that haven’t been invented just yet.” —Humpty Dumpty

“The Jabberwocky,” Lewis Carroll’s classic poem from Through the Looking Glass, and What Alice Found There—the second installment of the most famously nonsensical adventure in literary history—is “full of seemingly nonsensical words that somehow manage to make sense,” says narrator Jack Cutmore-Scott in the animated reading above from TED-Ed Animation. That word, nonsense, is associated with Carroll’s fantasy world more than any other, but what does it mean for a story to be nonsense and be intelligible at the same time?

Carroll, a mathematician by training, understood the fundamental principle of nonsense, which “T.S. Eliot reminded us, is not an absence of sense but a parody of it,” as J. Patrick Lewis writes at The New York Times. “Some of the portmanteau words Carroll invented—chortle, burble, frabjous and others—are now fully vested members of the lexicon. And the verse’s structure is a mirror, as Alice discovered, of classical English poetry.” Carroll composed the first four lines ten years before Through the Looking Glass, as a parodic “Stanza of Anglo-Saxon Poetry” to amuse his family.

It may help, or not, to keep in mind that Carroll is not only mocking English poetic forms and conventions, but a particular historical form of English that is mostly unrecognizable to modern readers, and certainly to Alice. But the poem’s syntax and structure are so familiar that we can easily piece together a monster-slaying narrative in which, as Alice remarks, “somebody killed something.” 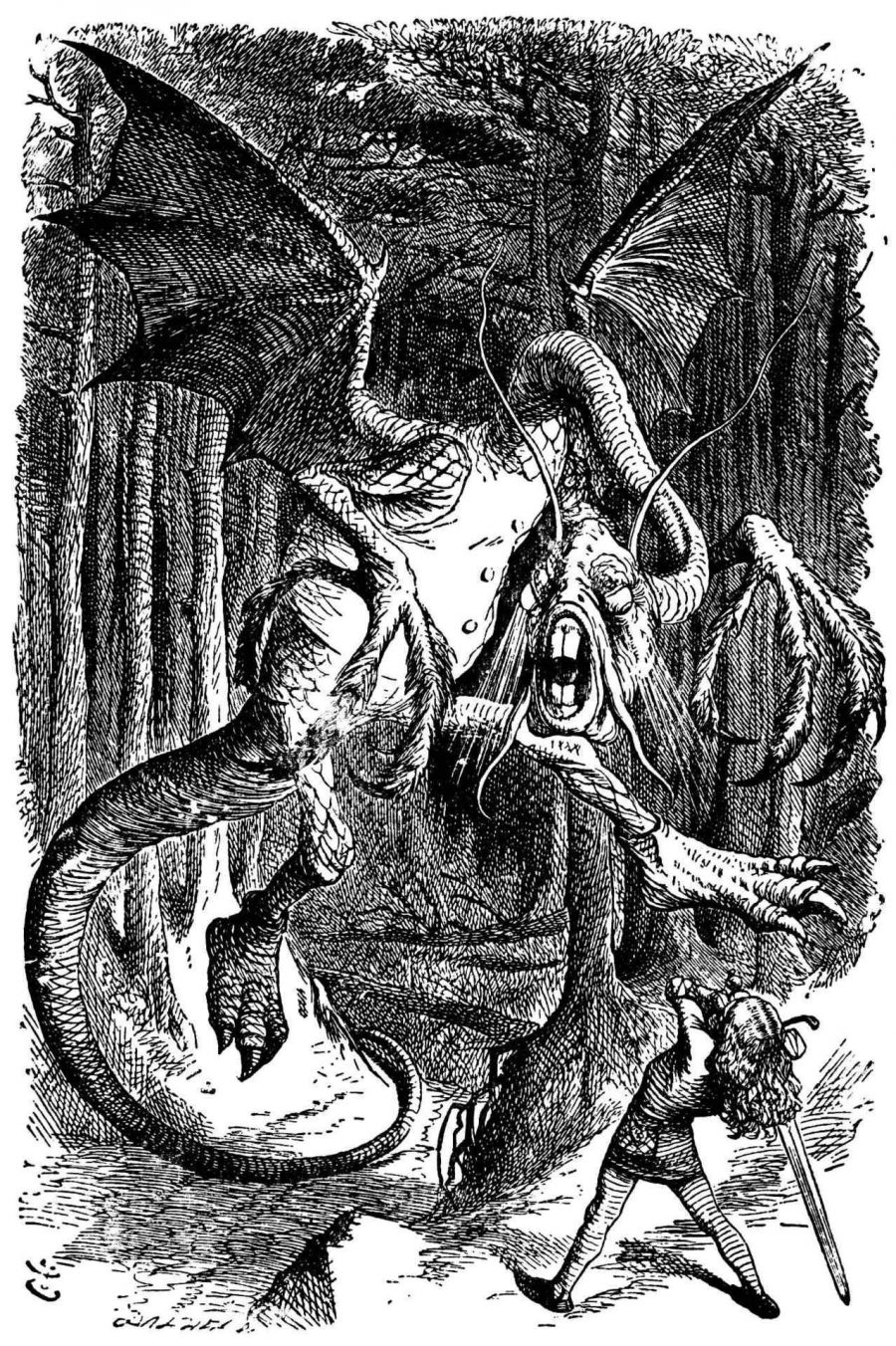 The ever-humble Humpty Dumpty is happy to explain, as was Carroll in his original composition, to which he attached a glossary very similar to the egg’s definitions and gave “the literal English” of the first stanza as:

“It was evening, and the smooth active badgers were scratching and boring holes in the hill side; all unhappy were the parrots, and the grave turtles squeaked out“.

There were probably sun dials on the top of the hill, and the “borogoves” were afraid that their nests would be undermined. The hill was probably full of the nests of “raths”, which ran out squeaking with fear on hearing the “toves” scratching outside. This is an obscure, but yet deeply affecting, relic of ancient Poetry.

Does this help? It does explain the mood Carroll is after, and he achieves it. The Jabberwocky is funny and playful and all the rest, but it is also deeply unsettling in its obscure mysteries and frightening descriptions of its title character.

In John Tenniel’s famous illustration of the beast, it appears as a scaly, leathery dragon with a face somewhere between a deep-sea fish and an overgrown sewer rat. The animation by Sjaak Rood gives it a more classically dragon-like appearance, in the crazed style of Ralph Steadman, while the Bandersnatch looks like something Paul Klee would have invented. The choice of artistic influences here shows Rood connecting deeply with the nonsense tradition in modern art, one which also turns familiar forms into nightmarish beings that fill our heads with ideas.