The Plastic Bag Store: A Pop Art Installation with a Whimsical But Deadly Serious Environmental Message

When COVID-19 exploded in New York City last March, it erased everything on the calendar, including:

The city’s freshly implemented ban on single use plastic bags…

And The Plastic Bag Store, a pop-up installation that was preparing to open in Times Square.

The theaters remain dark, but the ban is back on, as of October 19th. The 7-month pause was hastened by the pandemic, but also by an unsuccessful lawsuit brought by flexible packing manufacturer Poly-Pak Industries.

The Plastic Bag Store was allowed to open, too, albeit in an altered format from the hybrid art installation-adult puppet show creator Robin Frohardt has been working on for several years.

She has long intended for the project’s New York premiere to coincide with the ban.

Not because she hoped to get rich selling bags to citizens accustomed to getting them free with purchase.

There’s nothing to buy in this “store.” 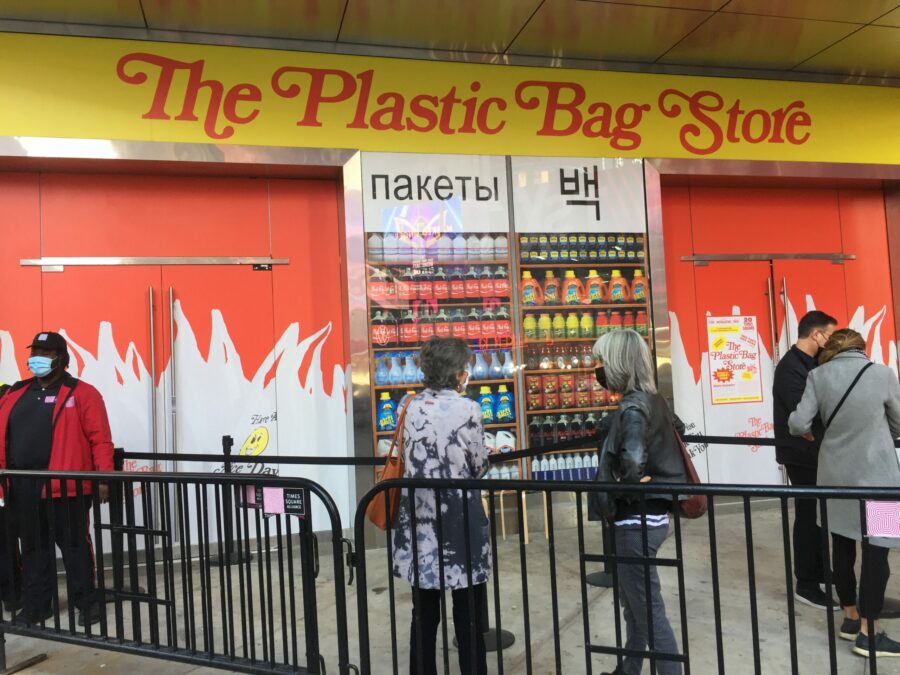 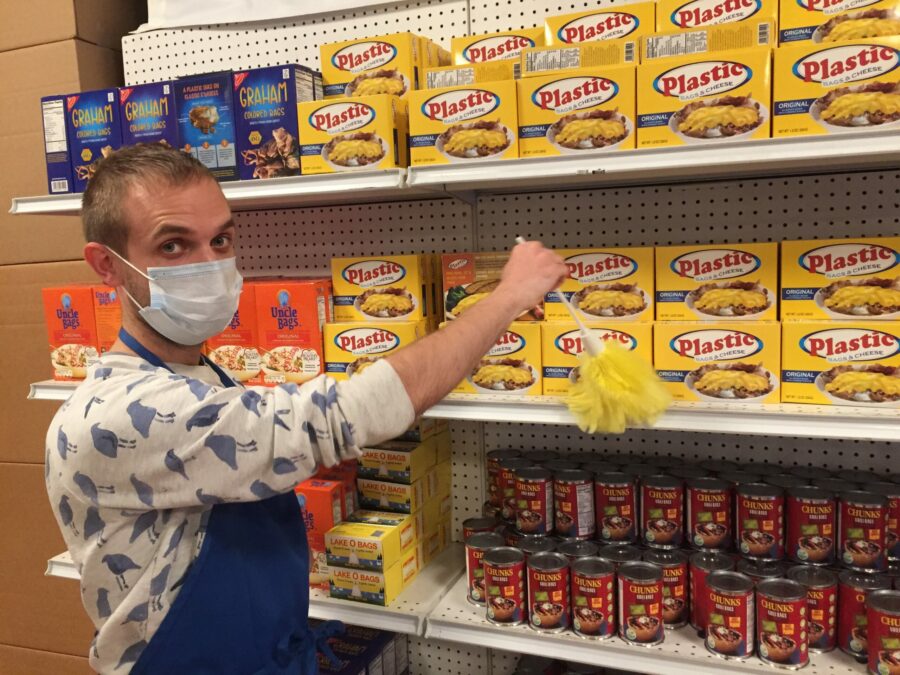 It’s a performance of sorts, but there’s no admission charge.

It’s definitely an education, and a meditation on how history can be doomed to repeat itself, in one way or another.

The Plastic Bag Store just ended its sold out 3-week run, playing to crowds of ticket holders now capped at 12 audience members per performance. The live elements have morphed into a trio of short films that are projected after ticket holders—customers if you will—have had a chance to look around.

The Times Square installation space has been kitted out to resemble a roomy bodega stocked with produce, baked goods, sushi rolls on plastic trays, shrink wrapped meat, and other familiar, if slightly skewed items.

Rows of 2 liter soda bottles with iconic red labels are shelved across from the magazine rack. Tubs of Bag & Jerry’s Mint Plastic Chip are in the freezer case.

The original plan allowed for customers to handle the goods as they wanted.  Now such interactions are prohibited.

Prior to March, New Yorkers were pretty handsy with produce, unabashedly pressing thumbs into avocados and holding tomatoes and melons to nostrils to determine ripeness.

The pandemic curbed that habit.

No matter. Nothing is ripe in the Plastic Bag Store, where any item not contained in a can or cardboard box has been constructed from the thousands of plastic bags Frohardt has collected over the years.

The facsimiles are shockingly adroit.

“I hunt plastic bags on the streets of New York,” she said in an interview with cultural funder Creative Capital:

I’m a real connoisseur now. There are certain colors I’m really attracted to. Certain bags are harder to find. I definitely look at trash differently than most people. I’m always looking for reds and oranges and greens. Sometimes I find a really interesting color that I haven’t seen before, like salmon or lavender. That’s always exciting. 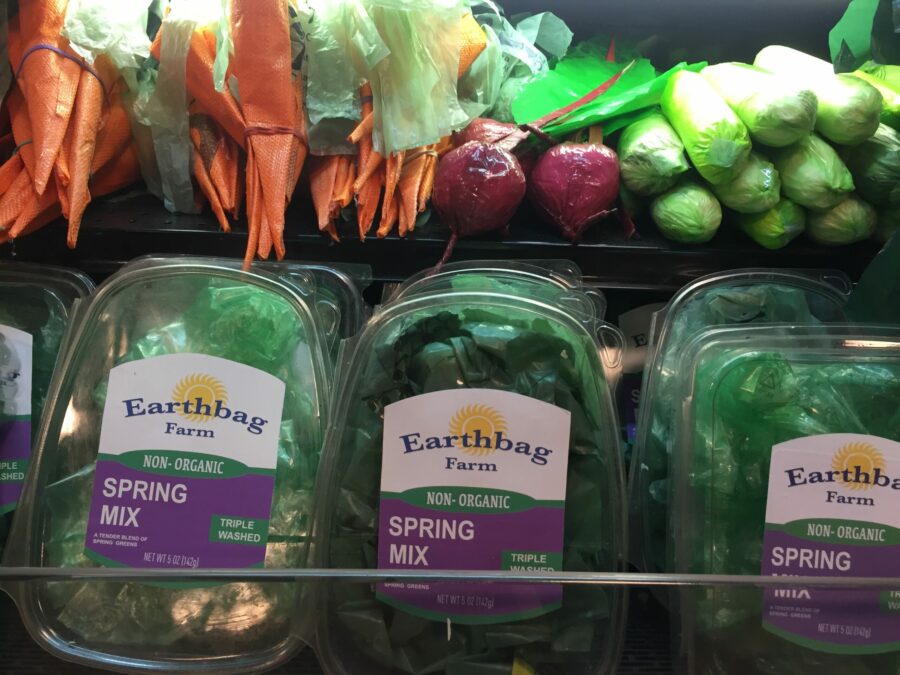 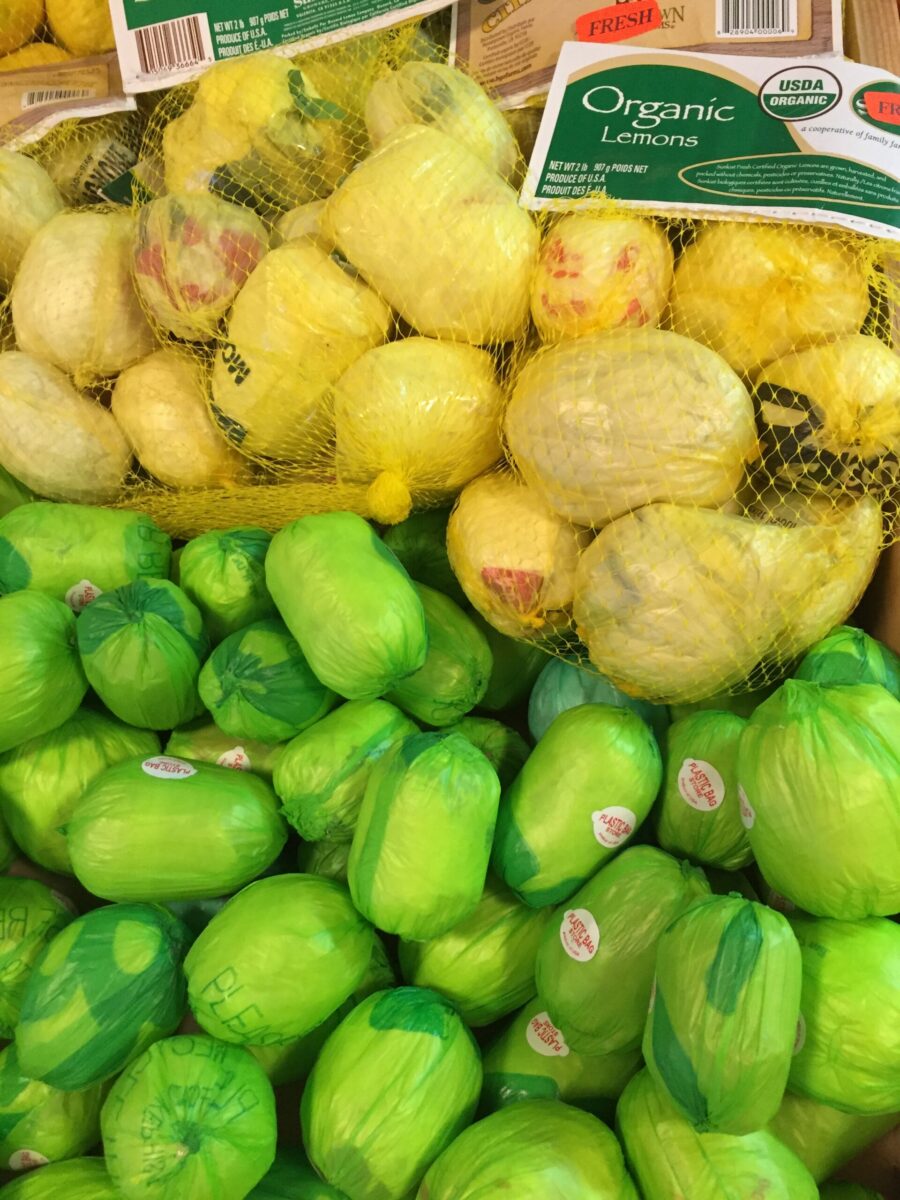 This diversity of materials helps with visual verisimilitude, most impressive in the produce section.

The product labels been richly fortified with satirical commentary. 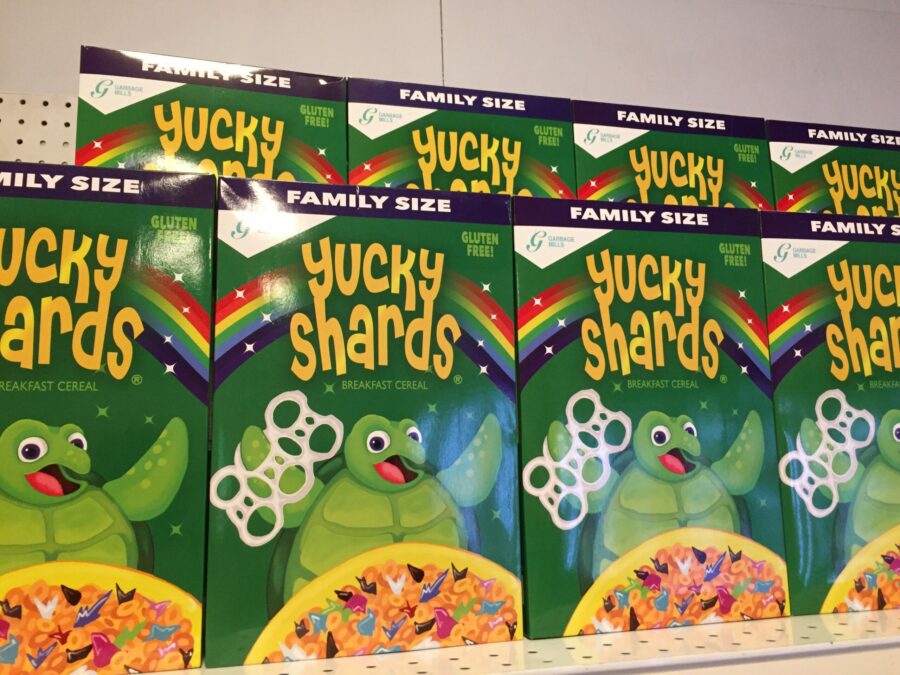 A family sized package of Yucky Shards appeals to children with sparkles, a rainbow, and a bright eyed cartoon mascot who doesn’t seem to mind the 6-pack yoke that’s attached itself to its person.

Everything about the “non-organic, triple-washed Spring Green Mix” from “Earthbag Farm” looks familiar, including the plastic container.

The cupcakes on display in the bakery section are topped with such festive embellishments as a “disposable” lighter and flossing pick. 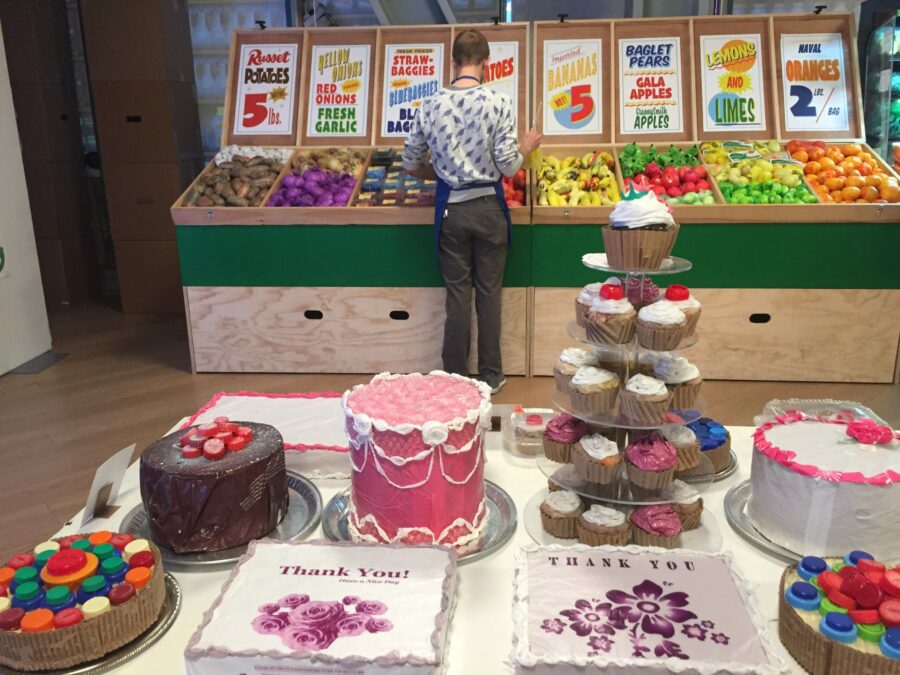 The tone is not scolding but rather comic, as Frohardt uses her spoofs to delight attendees into serious consideration of the “foreverness” of plastic and its environmental impact:

There is great humor to be found in the pitfalls of capitalism, and I find that humor and satire can be powerful tools for social criticism especially with issues that feel too sad and overwhelming to confront directly.

It’s really easy to turn away from images of turtles choking on straws. That stuff comes up in my Instagram feed all the time, and I’m like “Whoa! Swipe on past” because it’s too hard to look at. So what I’m trying to do is to make something that’s fun to look at, and fun to engage with, so you can think about it. Instead of just saying, “That’s fucked up! Ok on to the next thing.” 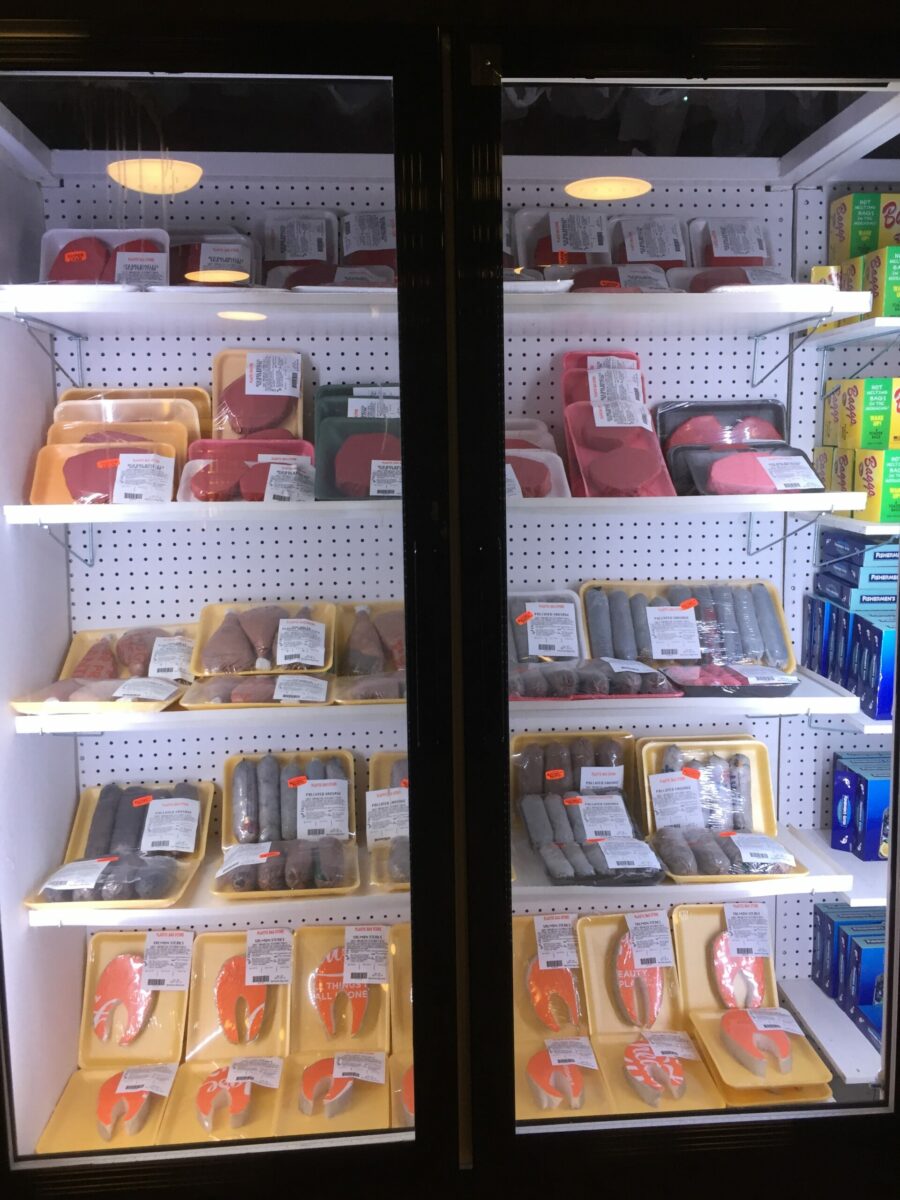 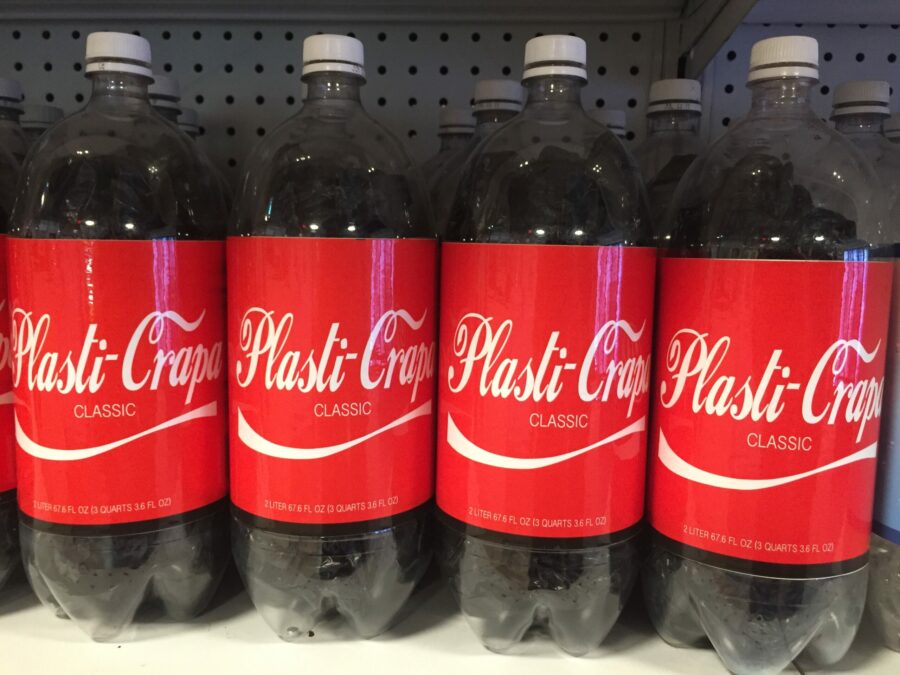 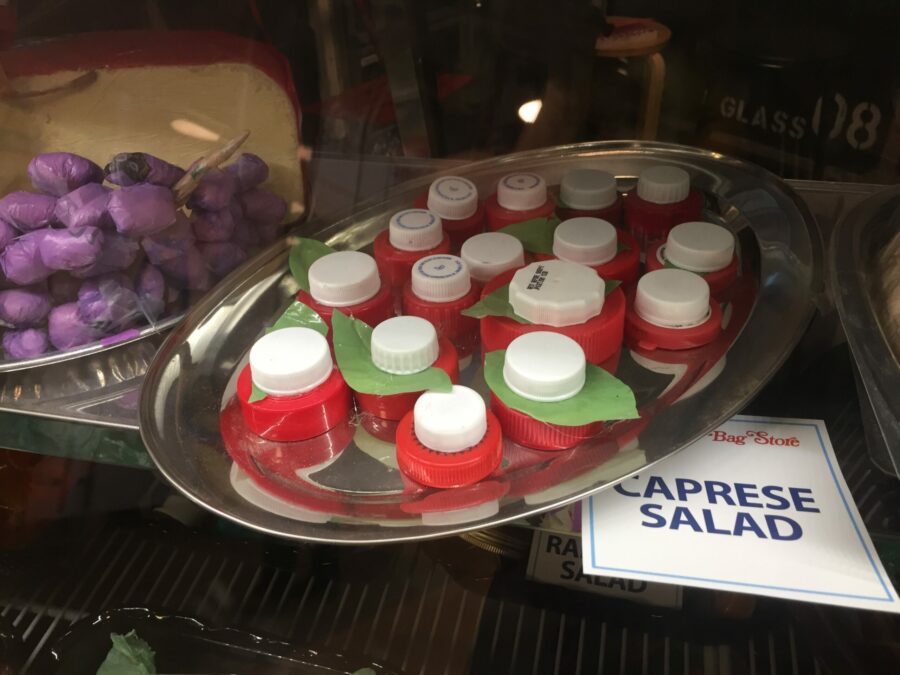 The Plastic Bag Store’s film segments also wield comedy to get their message across.

From the stiff shadow puppet Ancient Greeks who are seduced by the self-flattering slogan of a new product, Knowledge Water, which comes in single use vessels, to the recipient of a message in a plastic bottle, discovered so far into the future that he can only admire its craftsmanship, having no clue as to its purpose. (Letter carrier is his best guess. Eventually, other letter carriers are discovered in the freezing equatorial ocean, and housed in a museum alongside other hilariously mislabeled relics of a long dead civilization.) 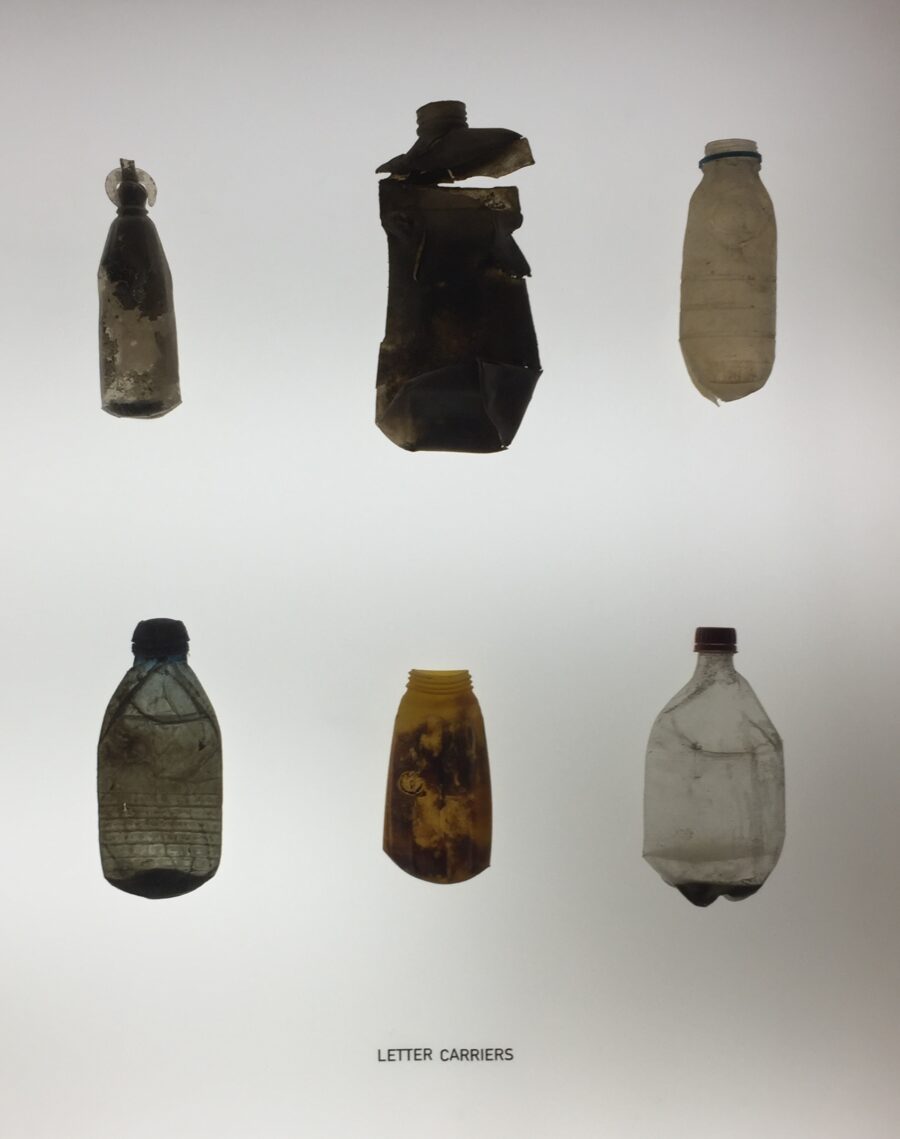 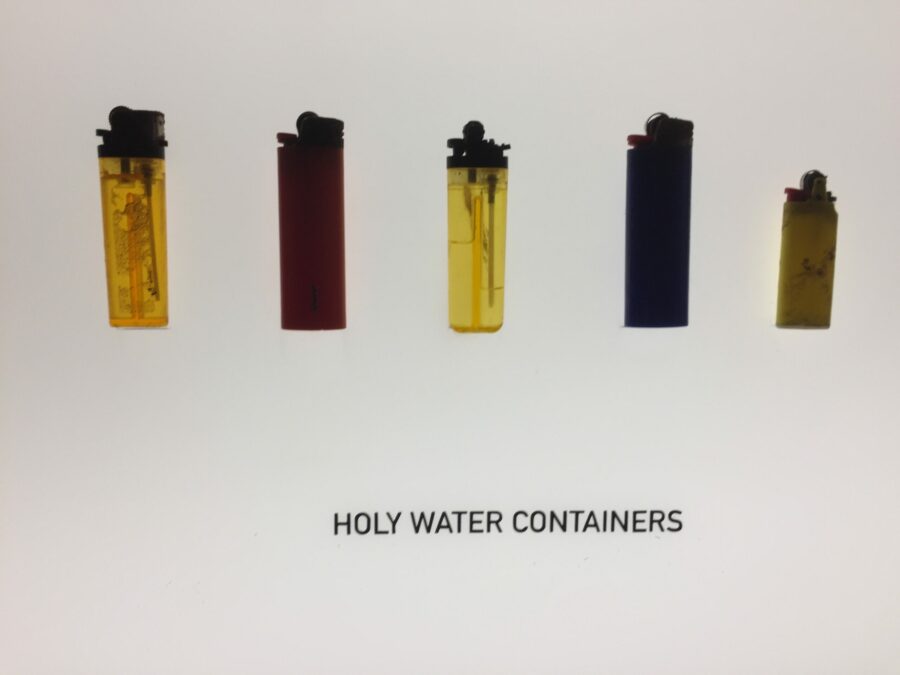