The UN’s World Happiness Report Ranks “Socialist Friendly” Countries like Finland, Norway, Denmark, Iceland & Sweden as Among the Happiest in the World

But “the important stuff can’t be measured,” says Ryan. Don’t we all want to believe that? “Can’t Buy Me Love” and so forth. Maybe it’s not that simple, either. Take happiness, for example. We might say we disagree about its relative importance, but we all go about the business of trying to buy happiness anyway. In our hearts of hearts, it’s a more or less an unquestionable good. So why does it seem so scarce and seem to cost so much?  Maybe the problem is not that happiness can’t be measured but that it can’t be commodified.

Buddhist economies like Bhutan, for example, run on a GHI (Gross National Happiness) index instead of GDP, and pose the question of whether the issue of national happiness is one of priorities. In other words, “you get what you measure.” In March, Laura Begley Bloom cited the 20 happiest countries in the world at Forbes, using the UN’s 2020 World Happiness Report, “a landmark survey of the state of global happiness,” as the report’s website describes it, “that ranks 156 countries by how happy their citizens perceive themselves to be.” 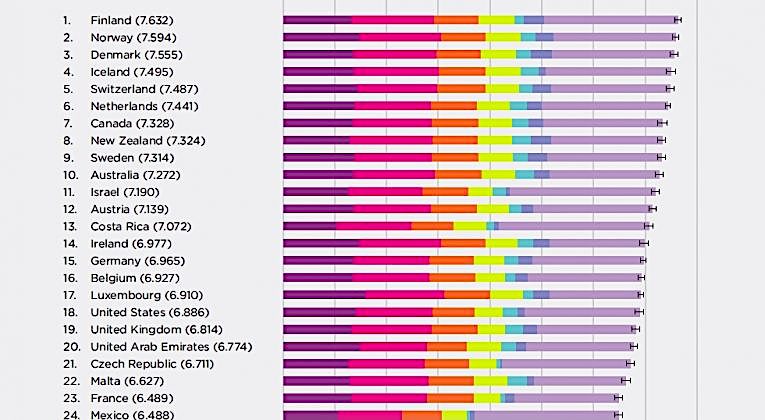 Happiness is measured across urban and rural environments and according to environmental quality and sustainable development metrics. The report uses six rubrics to assess happiness—levels of GDP, life expectancy, generosity, social support, freedom and corruption, and income. Their assessment relied on self-reporting, to give “a direct voice to the population as opposed the more top-down approach of deciding ex-ante what ought to matter.”  The last chapter attempts to account for the so-called “Nordic Exception,” or the puzzling fact that “Nordic countries are constantly among the happiest in the world.”

Maybe this fact is only puzzling if you begin with the assumption that wealthy capitalist economies promote happiness. But the top ten happiest countries are wealthy “socialist friendly” mixed economies, as Bill Maher jokes in the clip at the top, saying that in the U.S. “the right has a hard time understanding we don’t want long lines for bread socialism, we want that you don’t have to win the lotto to afford brain surgery socialism.” This is comedy, not trenchant geo-political analysis, but it alludes to another significant fact.

Most of the world’s unhappiest countries and cities are formerly colonized places whose economies, infrastructures, and supply chains have been destabilized by sanctions (which cause long bread lines), bombed out of existence by wealthier countries, and destroyed by climate catastrophes. The report does not fully explore the meaning of this data, focusing, understandably, on what makes populations happy. But an underlying theme is the suggestion that happiness is something we achieve in real, measurable economic relation with each other, not solely in the pursuit of individualist ideals.

How Much Money Do You Need to Be Happy? A New Study Gives Us Some Exact Figures

Creativity, Not Money, is the Key to Happiness: Discover Psychologist Mihaly Csikszentmihaly’s Theory of “Flow”