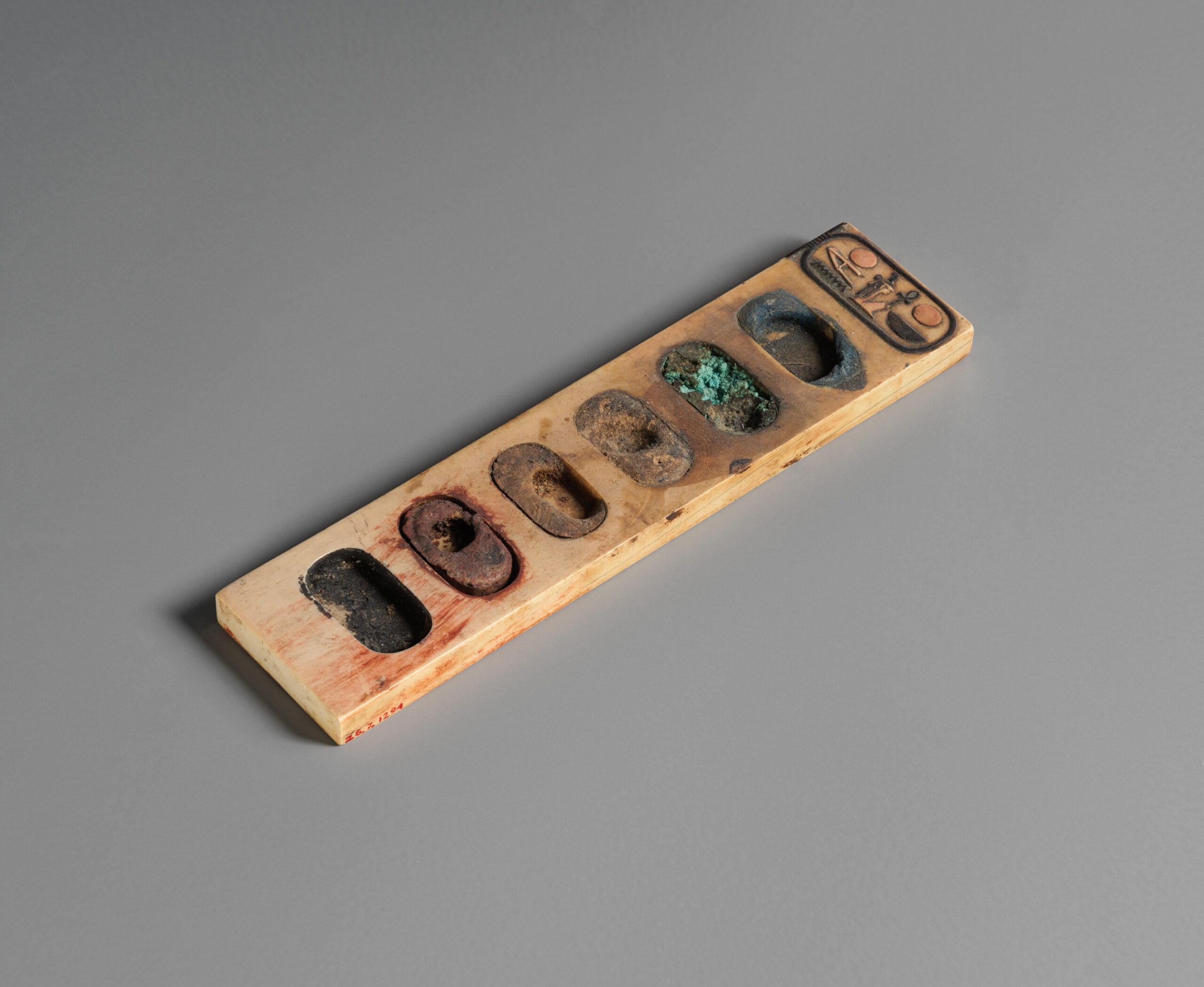 It’s a good bet your first box of crayons or watercolors was a simple affair of six or so colors… just like the palette belonging to Amenemopet, vizier to Pharaoh Amenhotep III (c.1391 – c.1354 BC), a pleasure-loving patron of the arts whose rule coincided with a period of great prosperity.

Over 3000 years old and carved from a single piece of ivory, the palette is marked “beloved of Re,” a royal reference to the sun god dear to both Amenhotep III and Akhenaton, his son and successor, whose worship of Re resembled monotheism.

As curator Catharine H. Roehrig notes in the Metropolitan’s publication, Life along the Nile: Three Egyptians of Ancient Thebes, the palette “contains the six basic colors of the Egyptian palette, plus two extras: reddish brown, a mixture of red ocher and carbon; and orange, a mixture of orpiment (yellow) and red ocher. The painter could also vary his colors by applying a thicker or thinner layer of paint or by adding white or black to achieve a lighter or darker shade.”

(Careful when mixing that orpiment into your red ocher, kids. It’s a form of arsenic.)

Other minerals that would have been ground and combined with a natural binding agent include gypsum, carbon, iron oxides, blue and green azurite and malachite. 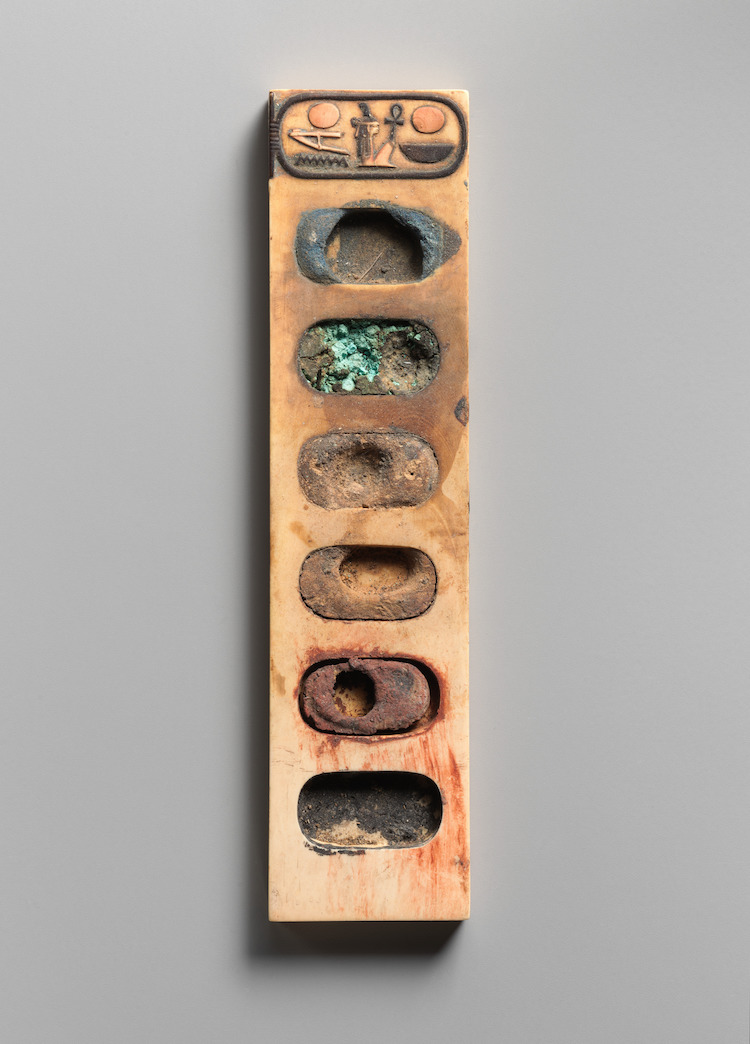 The colors themselves would have had strong symbolism for Amenhotep and his people, and the artist would have made very deliberate—regulated, even—choices as to which pigment to load onto his palm fiber brush when decorating tombs, temples, public buildings, and pottery.

As Jenny Hill writes in Ancient Egypt Online, iwn—color—can also be translated as “disposition,” “character,” “complexion” or “nature.” She delves into the specifics of each of the six basic colors:

Wadj (green) also means “to flourish” or “to be healthy.” The hieroglyph represented the papyrus plant as well as the green stone malachite (wadj). The color green represented vegetation, new life and fertility. In an interesting parallel with modern terminology, actions which preserved the fertility of the land or promoted life were described as “green.”

Dshr (red) was a powerful color because of its association with blood, in particular the protective power of the blood of Isis…red could also represent anger, chaos and fire and was closely associated with Set, the unpredictable god of storms. Set had red hair, and people with red hair were thought to be connected to him. As a result, the Egyptians described a person in a fit of rage as having a “red heart” or as being “red upon” the thing that made them angry. A person was described as having “red eyes” if they were angry or violent. “To redden” was to die and “making red” was a euphemism for killing.

Irtyu (blue) was the color of the heavens and hence represented the universe. Many temples, sarcophagi and burial vaults have a deep blue roof speckled with tiny yellow stars. Blue is also the color of the Nile and the primeval waters of chaos (known as Nun).

Khenet (yellow) represented that which was eternal and indestructible, and was closely associated with gold (nebu or nebw) and the sun. Gold was thought to be the substance which formed the skin of the gods.

Hdj (white) represented purity and omnipotence. Many sacred animals (hippo, oxen and cows) were white. White clothing was worn during religious rituals and to “wear white sandals” was to be a priest…White was also seen as the opposite of red, because of the latter’s association with rage and chaos, and so the two were often paired to represent completeness.

Kem (black) represented death and the afterlife to the ancient Egyptians. Osiris was given the epithet “the black one” because he was the king of the netherworld, and both he and Anubis (the god of embalming) were portrayed with black faces. The Egyptians also associated black with fertility and resurrection because much of their agriculture was dependent on the rich dark silt deposited on the river banks by the Nile during the inundation. When used to represent resurrection, black and green were interchangeable. 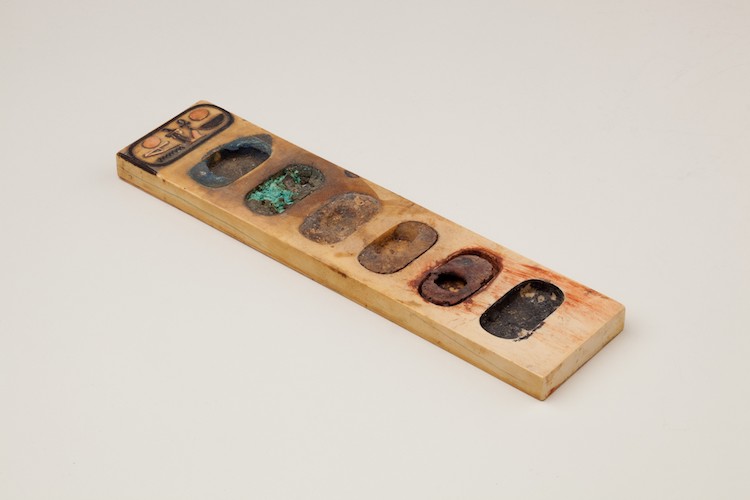 Wonders of Ancient Egypt: A Free Online Course from the University of Pennsylvania

Take a 3D Tour Through Ancient Giza, Including the Great Pyramids, the Sphinx & More

What Ancient Egyptian Sounded Like & How We Know It