What Did People Do Before the Invention of Eyeglasses?

You remember it — one of the most heartbreaking scenes on TV. A man longs for nothing more than time to read, to be free of all those people Sartre told us make our hells. Finally granted his wish by the H-Bomb, he then accidentally break his glasses, rendering himself unable make out a word. Oh, cruel irony! Not an optometrist or optician in sight! Surely, there are “Time Enough at Last” jokes at eye care conventions worldwide.

Morality tales wrapped in science fiction might make us think about all sorts of things, but one of the most obvious questions when we witness the fate of Mr. Henry Bemis, “charter member in the fraternity of dreamers,” might be, but what did people do before corrective lenses? Were millions forced to accept his fate, living out their lives with farsightedness, nearsightedness, and other defects that impede vision? How did early humans survive in times much less hospitable to disabilities? At least there were others to read and describe things for them….

In truth, the Twilight Zone is not far off the mark. Or at least nearsightedness and reading are closely linked. “As long as primates have been around, there’s probably been myopia,” says professor of ophthalmology Ivan Schwab. But Schwab argues in his book Evolution’s Witness: How Eyes Evolved that the rise of reading likely caused skyrocketing rates of myopia over the past three hundred years. “Though genes and nutrition may play a role in nearsightedness,” Natalie Jacewicz writes at NPR, “[Schwab] says education and myopia seem to be linked, suggesting that when people do a lot of close work, their eyes grow longer.”

As the History Dose video above explains, the oldest image of a pair of glasses dates from a 1351 painting of Cardinal Hugh of Saint-Cher. The painting is an anachronism — spectacles, the narrator tells us, were invented 23 years earlier in Pisa, after the cardinal’s death. They “gradually spread across Europe and travelled the Silk Road to China.” (The oldest surviving pair of glasses dates from around 1475). So what happened before 1286? As you’ll learn, glasses were not the only way to enlarge small items. In fact, humans have been using some form of magnifying lens to read small print (or manuscript or cuneiform or what-have-you) for thousands of years. Those lenses, however, corrected presbyopia, or far-sightedness. 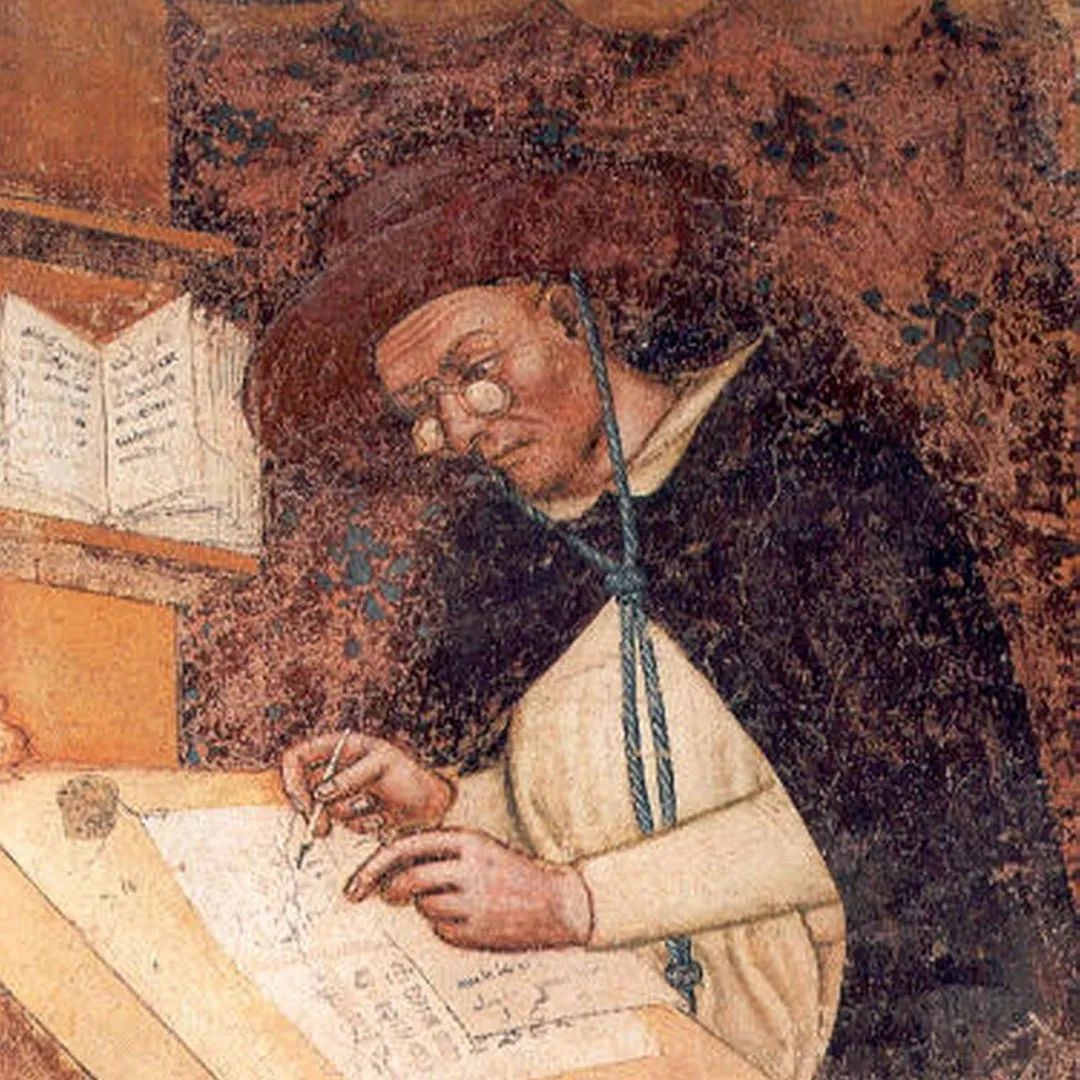 Those with myopia were mostly out of luck until the invention of sophisticated lens-grinding techniques and improved vision tests. But for most of human history, unless you were a sailor or a soldier, you “likely spent your day as an artisan, smith, or farm worker,” occupations where distance vision didn’t matter as much. In fact, artisans like medieval scribes and illuminators, says Neil Handley — museum curator of the College of Optometrists, London — were “actually encouraged to remain in their myopic condition, because it was actually ideal for them doing this job.”

It wasn’t until well after the time of Gutenberg that wearing lenses on one’s face became a thing — and hardly a popular thing at first. Early glasses were held up to the eyes, not worn. They were heavy, thick, and fragile. In the 15th century, “because… they were unusual and rare,” says Handley, “they were seen as having magical powers” and their wearers viewed as “in league with the devil, immoral.” That stigma went away, even if glasses picked up other associations that sometimes made their users the subject of taunts. But by the nineteenth century, glasses were common around the world.

Given that we all spend most of our time interacting with small text and images on handheld screens, it seems maybe they haven’t spread widely enough. “More than a billion, and maybe as many as 2.5 billion, people in the world need but don’t have glasses to correct for various vision impairments,” notes Livescience, citing figures from The New York Times. For many people, especially in the developing world, the question of how to get by in the world without eyeglasses is still a very pressing, present-day issue.

The World’s Oldest Surviving Pair of Glasses (Circa 1475)