There’s a passage from Kurt Vonnegut’s Breakfast of Champions that crosses our desk a lot at this time of year. It’s the one in which he declares Armistice Day, which coincidentally falls on his birthday, sacred:

What else is sacred? Oh, Romeo and Juliet, for instance.

And all music is.

Hopefully Shakespeare won’t take umbrage if we skip over his doomed teenaged lovers to celebrate Kurt Vonnegut’s 11/11 Centennial with songs inspired by his work.

Take the Kilgore Trout Experience’s tribute to Sirens of Titan, above.

The driving force behind the KTE Tim Langsford, a drummer who mentors Autistic students at the University of Plymouth, was looking for ways to help his “foggy mind remember the key concepts, characters, and memorable lines that occur in each” of Vonnegut’s 14 books.

The solution? Community and accountability to an ongoing assignment. Langsford launched the Plymouth Vonnegut Collective in 2019 with a typewritten manifesto, inviting interested parties to read (or re-read) the novels in publication order, then gather for monthly discussions.

His loftier goal was for book club members to work collaboratively on a 14-track concept album informed by their reading.

They stuck to it, with efforts spanning a variety of genres.

The psychedelic God Bless You, Mister Rosewater mixes quotes from the book with edited clips of the collective’s discussion of the novel.

The project pushed Langsford out from behind the drum kit, as well as his comfort zone:

It has taken an awful lot to be comfortable with the songs on which I sing. However, I have tried to invoke KV’s sense of creation as if no one is watching. It doesn’t matter so do it for yourself…. Although do I contradict that by sharing these things to the internet rather than trashing them unseen or unheard?!

Ah, but isn’t one of the most beautiful uses of the Internet as a tool for finding out what we have in common with our fellow humans?

Congratulations to our fellow Vonnegut fans in Plymouth, who will be celebrating their achievement and the legendary author’s 100th birthday with an event featuring poetry, art, music and film inspired by the birthday boy’s novels.

Folk rocker Al Stewart is another who “was drawn by the Sirens of Titan.”  The lyrics make perfect sense if the novel is fresh in your mind:

But here in the yellow and blue of my days

I wander the endless Mercurian caves

Watching for the signs the Harmonians make

The words on the walls

The lyrics to Nice, Nice, Very Nice by Stewart’s peers in Ambrosia are pulled straight from the holy scripture of Bokononism, the religion Vonnegut invented in Cat’s Cradle.

The band gave the author a writing credit. He repaid the compliment with a fan letter:

I was at my daughter’s house last night, and the radio was on. By God if the DJ didn’t play our song, and say it was number ten in New York, and say how good you guys are in general. You can imagine the pleasure that gave me. Luck has played an enormous part in my life. Those who know pop music keep telling me how lucky I am to be tied in with you. And I myself am crazy about our song, of course, but what do I know and why wouldn’t I be?  This much I have always known, anyway: Music is the only art that’s really worth a damn. I envy you guys.

If that isn’t nice, we don’t know what is.

Vonnegut’s best known work, the time-traveling, perennially banned anti-war novel, Slaughterhouse-Five, presents an irresistible songwriting challenge, judging from the number of tunes that have sprouted from its fertile soil.

Susan Hwang is uniquely immersed in all things Vonnegut, as founder of the Bushwick Book Club, a loose collective of musicians who convene monthly to present songs inspired by a pre-selected title – including almost every novel in the Vonnegut oeuvre, as well as the short stories in Welcome to the Monkey House and the essays comprising A Man Without a Country.

She titled her recent EP of five Vonnegut-inspired songs, Everything is Sateen, a nod to the Sateen Dura-Luxe house paint Vonnegut’s abstract expressionist, Rabo Karabekian, favors in Bluebeard.

We’re fairly confident that Hwang’s No Answer, offered above as a thank you to crowdfunders of a recent tour, will be the bounciest adaptation of Slaughterhouse-Five you’ll hear all day.

Sweet Soubrette, aka Ellia Bisker, another Bushwick Book Club fixture and one half of the goth-folk duo Charming Disaster, leaned into the horrors of Dresden for her Slaughterhouse-Five contribution, namechecking rubble, barbed wire, and the “mustard gas and roses” breath born of a night’s heavy drinking.

Songwriting musicologist Gail Sparlin’s My Blue Heaven: The Love Song of Montana Wildhack – seen here in a library performance – is as girlish and sweet as Valerie Perrine’s take on the character in George Roy Hill’s 1972 film of Slaughterhouse-Five.

Back in 1988, Hawkwind‘s The War I Survived suffused Slaughterhouse-Five with some very New Wave synths…

The chorus of Sam Ford’s wistful So It Goes taps into the novel’s time traveling aspect, and touches on the challenges many soldiers experience when attempting to reintegrate into their pre-combat lives :

That ain’t the way home

Having invoked Vonnegut’s evergreen phrase, there’s no getting away without mentioning Nick Lowe’s 1976 power pop hit, though it may make for a tenuous connection.

Still, tenuous connections can count as connections, especially when you tally up all the references to Cat’s Cradle’s secret government weapon, Ice Nine, in lyrics and band names.

Then there are the submerged references. We may not pick up on them, but we’re willing to believe they’re there.

Pearl Jam‘s front man Eddie Vedder wrote that “books like Cat’s Cradle, God Bless You, Mr. Rosewater, Player Piano…they’ve had as much influence on me as any record I’ve ever owned.”

He also earned a permanent spot in the karass by passing out copies of Bluebeard to attendees at the 4th Annual Kokua Festival to benefit environmental education in Hawaii. 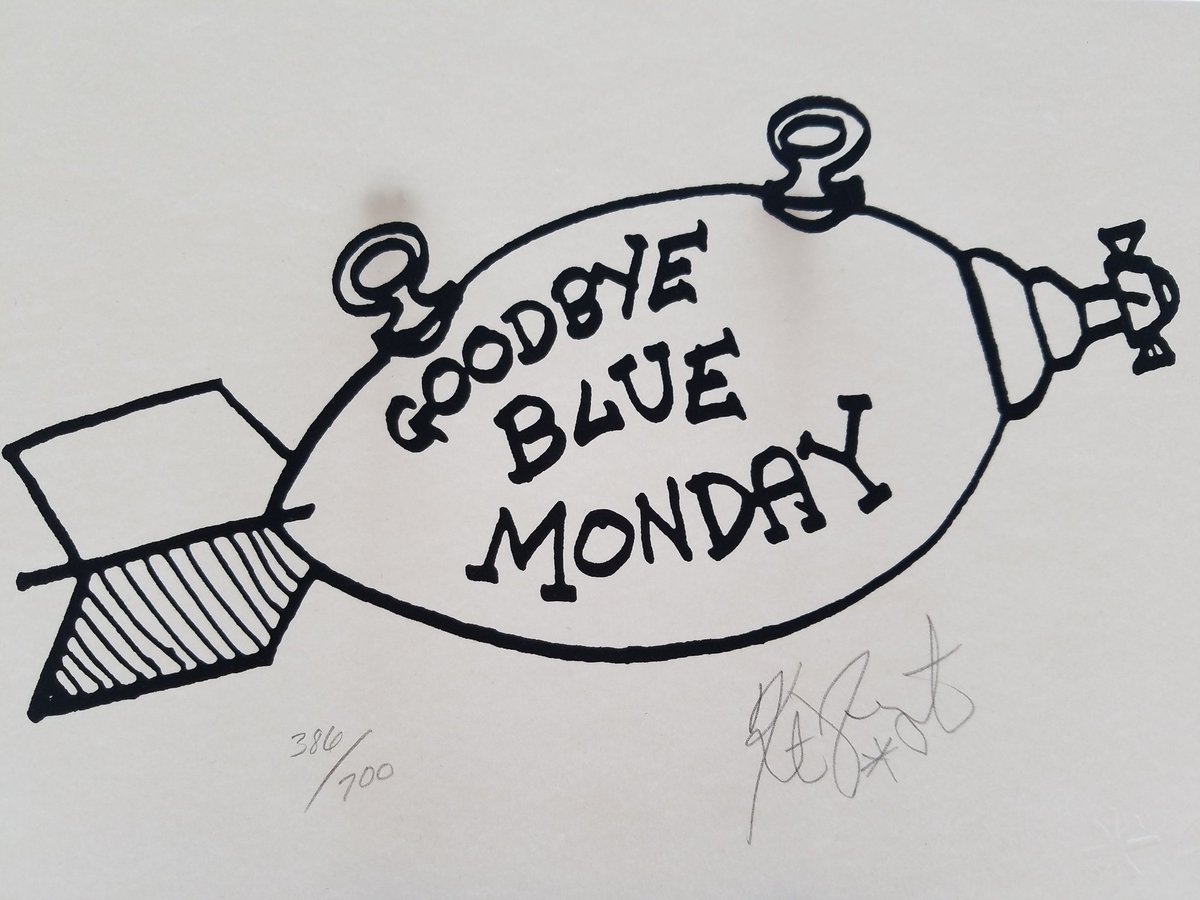 A memorable Breakfast of Champions illustration is said to have lit a flame with New Order, propelling Vonnegut out onto the dance floor.

And Ringo Starr edged his way to favorite Beatle status when he tipped his hat to Breakfast of Champions, dedicating his 1973 solo album to “Kilgore Trout and all the beavers.”

There are dozens more we could mention – you’ll find some of them in the playlist below – but without further ado, let’s welcome to the stage Special K and His Crew!

– Ayun Halliday is the Chief Primatologist of the East Village Inky zine and author, most recently, of Creative, Not Famous: The Small Potato Manifesto.  Join her for a free Vonnegut Centennial Fanzine Workshop at the Kurt Vonnegut Museum & Library on November 19.  Follow her @AyunHalliday.