Carl Jung Psychoanalyzes Hitler: “He’s the Unconscious of 78 Million Germans.” “Without the German People He’d Be Nothing” (1938) 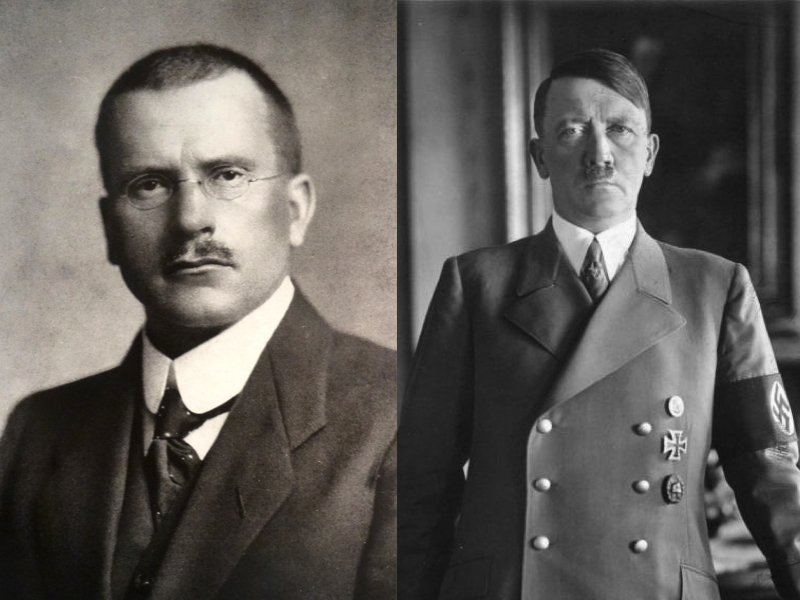 Were you to google “Carl Jung and Nazism”—and I’m not suggesting that you do—you would find yourself hip-deep in the charges that Jung was an anti-Semite and a Nazi sympathizer. Many sites condemn or exonerate him; many others celebrate him as a blood and soil Aryan hero. It can be nauseatingly difficult at times to tell these accounts apart. What to make of this controversy? What is the evidence brought against the famed Swiss psychiatrist and onetime close friend, student, and colleague of Sigmund Freud?

Truth be told, it does not look good for Jung. Unlike Nietzsche, whose work was deliberately bastardized by Nazis, beginning with his own sister, Jung need not be taken out of context to be read as anti-Semitic. There is no irony at work in his 1934 paper The State of Psychotherapy Today, in which he marvels at National Socialism as a “formidable phenomenon,” and writes, “the ‘Aryan’ unconscious has a higher potential than the Jewish.” This is only one of the least objectionable of such statements, as historian Andrew Samuels demonstrates.

One Jungian defender admits in an essay collection called Lingering Shadows that Jung had been “unconsciously infected by Nazi ideas.” In response, psychologist John Conger asks, “Why not then say that he was unconsciously infected by anti-Semitic ideas as well?”—well before the Nazis came to power. He had expressed such thoughts as far back as 1918. Like the philosopher Martin Heidegger, Jung was accused of trading on his professional associations during the 30s to maintain his status, and turning on his Jewish colleagues while they were purged.

Yet his biographer Deirdre Bair claims Jung’s name was used to endorse persecution without his consent. Jung was incensed, “not least,” Mark Vernon writes at The Guardian, “because he was actually fighting to keep German psychotherapy open to Jewish individuals.” Bair also reveals that Jung was “involved in two plots to oust Hitler, essentially by having a leading physician declare the Führer mad. Both came to nothing.” And unlike Heidegger, Jung strongly denounced anti-Semitic views during the war. He “protected Jewish analysts,” writes Conger, “and helped refugees.” He also worked for the OSS, precursor to the CIA, during the war.

His recruiter Allen Dulles wrote of Jung’s “deep antipathy to what Nazism and Fascism stood for.” Dulles also cryptically remarked, “Nobody will probably ever know how much Prof. Jung contributed to the allied cause during the war.” These contradictions in Jung’s words, character, and actions are puzzling, to say the least. I would not presume to draw any hard and fast conclusions from them. They do, however, serve as the necessary context for Jung’s observations of Adolph Hitler. Nazis of today who praise Jung most often do so for his supposed characterization of Hitler as “Wotan,” or Odin, a comparison that thrills neo-pagans who, like the Germans did, use ancient European belief systems as clothes hangers for modern racist nationalism.

In his 1936 essay, “Wotan,” Jung describes the old god as a force all its own, a “personification of psychic forces” that moved through the German people “towards the end of the Weimar Republic”—through the “thousands of unemployed,” who by 1933 “marched in their hundreds of thousands.” Wotan, Jung writes, “is the god of storm and frenzy, the unleasher of passions and the lust of battle; moreover he is a superlative magician and artist in illusion who is versed in all secrets of an occult nature.” In personifying the “German psyche” as a furious god, Jung goes so far as to write, “We who stand outside judge the Germans far too much as if they were responsible agents, but perhaps it would be nearer the truth to regard them also as victims.”

“One hopes,” writes Per Brask, “evidently against hope, that Jung did not intend” his statements “as an argument of redemption for the Germans.” Whatever his intentions, his mystical racialization of the unconscious in “Wotan” accorded perfectly well with the theories of Alfred Rosenberg, “Hitler’s chief ideologist.” Like everything about Jung, the situation is complicated. In a 1938 interview, published by Omnibook Magazine in 1942, Jung repeated many of these disturbing ideas, comparing the German worship of Hitler to the Jewish desire for a Messiah, a “characteristic of people with an inferiority complex.” He describes Hitler’s power as a form of “magic.” But that power only exists, he says, because “Hitler listens and obeys….”

Jung’s observations are bombastic, but they are not flattering. The people may be possessed, but it is their will, he says, that the Nazi leader enacts, not his own. "The true leader," says Jung, "is always led." He goes on to paint an even darker picture, having closely observed Hitler and Mussolini together in Berlin:

In comparison with Mussolini, Hitler made upon me the impression of a sort of scaffolding of wood covered with cloth, an automaton with a mask, like a robot or a mask of a robot. During the whole performance he never laughed; it was as though he were in a bad humor, sulking. He showed no human sign.

His expression was that of an inhumanly single-minded purposiveness, with no sense of humor. He seemed as if he might be a double of a real person, and that Hitler the man might perhaps be hiding inside like an appendix, and deliberately so hiding in order not to disturb the mechanism.

With Hitler you do not feel that you are with a man. You are with a medicine man, a form of spiritual vessel, a demi-deity, or even better, a myth. With Hitler you are scared. You know you would never be able to talk to that man; because there is nobody there. He is not a man, but a collective. He is not an individual, but a whole nation. I take it to be literally true that he has no personal friend. How can you talk intimately with a nation?

Read the full interview here. Jung goes on to further discuss the German resurgence of the cult of Wotan, the “parallel between the Biblical triad… and the Third Reich,” and other peculiarly Jungian formulations. Of Jung’s analysis, interviewer H.R. Knickerbocker concludes, “this psychiatric explanation of the Nazi names and symbols may sound to a layman fantastic, but can anything be as fantastic as the bare facts about the Nazi Party and its Fuehrer? Be sure there is much more to be explained in them than can be explained by merely calling them gangsters.”