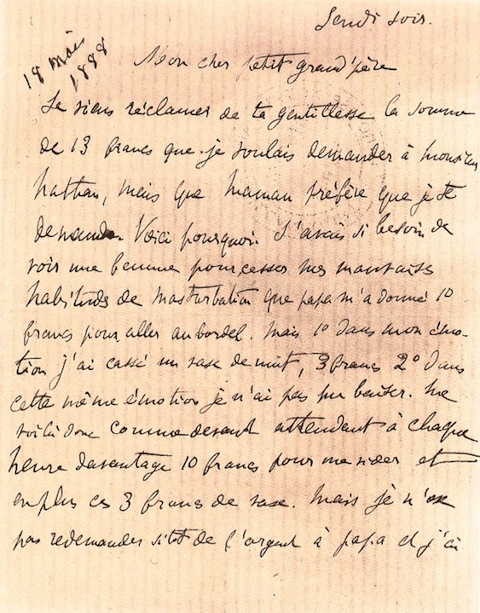 “One can say anything so long as one does not say ‘I.'” Marcel Proust wrote these words to his fellow Frenchman of letters André Gide, and they constitute valuable advice for any novelist as well as a useful key to understanding Proust’s own work. We think of Proust — especially today, the hundredth anniversary of Swann’s Way, which opens his masterwork Remembrance of Things Past (À la recherche du temps perdu) — as an important French novelist, an important modern novelist, an important fin-de-siècle novelist, and so on. We also think of Proust as an important gay novelist.  And we owe that, in some sense, to Gide, who revealed the closeted Proust’s homosexuality in their published correspondence after Proust’s death. Sexuality has since become a major element of the robust field of Proust criticism, and the letter above surely gives its scholars material — or at least those scholars willing to examine the author’s biography alongside his work.

I appeal to your kindness for the sum of 13 francs that I wished to ask Mr. Nathan for, but which Mama prefers I request from you. Here is why. I so needed to see if a woman could stop my awful masturbation habit that Papa gave me 10 francs to go to a brothel. But first, in my agitation, I broke a chamber pot: 3 francs; then, still agitated, I was unable to screw. So here I am, back to square one, waiting more and more as hours pass for 10 francs to relieve myself, plus 3 francs for the pot. But I dare not ask Papa for more money so soon and so I hoped you could come to my aid in a circumstance which, as you know, is not merely exceptional but also unique. It cannot happen twice in one lifetime that a person is too flustered to screw.

I kiss you a thousand times and dare to thank you in advance.

I will be home tomorrow morning at 11am. If you are moved by my situation and can answer my prayers, I will hopefully find you with the amount. Regardless, thank you for your decision which I know will come from a place of friendship.