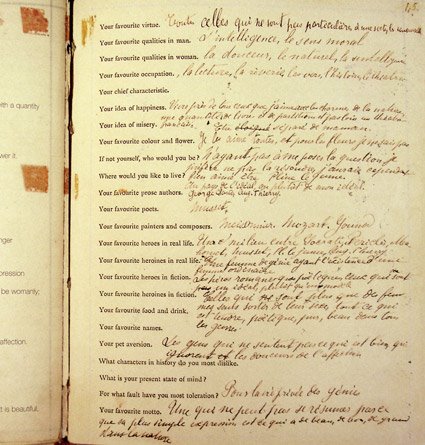 Marcel Proust, the author of the great modernist work À la recherche du temps perdu (Remembrance of Things Past), was the very definition of the sensitive artist. Perpetually battling bouts of depression and ill health, Proust lived at home with his parents until their deaths. Though he became a recluse later in life, sleeping by day and writing feverishly at night, he poured his soul into his epic novel, detailing his struggles in a manner that has connected deeply with generations of readers. Proust has become over the years an icon of artistic sincerity.

In the late nineteenth century, the confession book was all the rage in England. It asked readers to answer a series of personal questions designed to reveal their inner characters. In 1890, Proust, still a teenager, took this questionnaire, answering the questions with frank sincerity. The original manuscript was uncovered in 1924, two years after Proust’s death, and in 2003, it was auctioned off for roughly $130,000. You can see the original 1890 manuscript above and, if your French isn’t up to snuff, we have a translation below.

Many decades later, French TV host Bernard Pivot started using this exact type of questionnaire to interview thinkers, leaders and celebrities. It proved to be a great device for getting a glimpse into the inner workings of a star’s mind. James Lipton adapted the questionnaire for his own show, Inside the Actors Studio (watch above), while misattributing its origins to Proust. Nonetheless, the name ‘The Proust Questionnaire” stuck. The quiz is also a regular feature in the magazine Vanity Fair. You can read the responses from the likes of Rachel Maddow, Harrison Ford and Louis CK, whose answers read like an extension of his stand up routine. And if you’re eager to take the test yourself, you can do so here.

The quality that I desire in a man:
Manly virtues, and frankness in friendship.

The quality that I desire in a woman:
Feminine charms.

What I appreciate most about my friends:
To have tenderness for me, if their personage is exquisite enough to render quite high the price of their tenderness.

My main fault:
Not knowing, not being able to “want”.

My dream of happiness:
I am afraid it be not great enough, I dare not speak it, I am afraid of destroying it by speaking it.

What would be my greatest misfortune?
Not to have known my mother or my grandmother.

What I should like to be:
Myself, as the people whom I admire would like me to be.

My favorite color:
The beauty is not in the colors, but in their harmony.

My favorite bird:
The swallow.

My heroes in fiction:
Hamlet.

My favorite heroines in fiction.
Bérénice.

My heroines in history:
Cleopatra.

My favorite names:
I only have one at a time.

What I hate most of all:
What is bad about me.

Historical figures that I despise the most:
I am not educated enough.

The military event that I admire most:
My military service!

The gift of nature that I would like to have:
Will-power, and seductiveness.

How I want to die:
Improved—and loved.

My present state of mind:
Boredom from having thought about myself to answer all these questions.

Faults for which I have the most indulgence:
Those that I understand.

My motto:
I should be too afraid that it bring me misfortune.