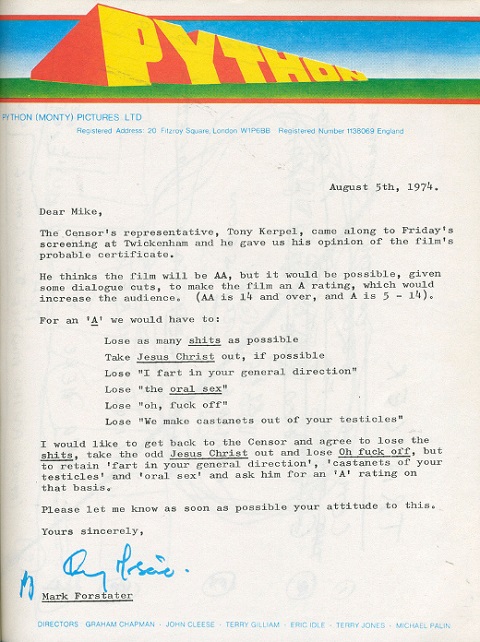 If anyone could make toilet humor funny past the age of 14, it was Monty Python. Mining equally the halls of academia and the grade school yard, there was no register too high or too low for the masterful British satirists. And when it came time for them to release their second film in 1975—Arthurian spoof Monty Python and the Holy Grail—the troop fought in vain to reach an audience of all ages. Unlike today’s many ratings gradations, the British Board of Film Classification (BBFC) then had a very simple classification system: AA for 14 and over, and A for ages 5-14. Hoping to increase the film’s audience, producer Mark Forstater wrote the letter above to fellow producer Michael White a few days after a Twickenham screening attended by BBFC member Tony Kerpel, who suggested a few cuts to bring the film an A rating.

Lose as many shits as possible
Take Jesus Christ out, if possible
Lose “I fart in your general direction”
Lose “the oral sex”
Lose “oh, fuck off”
Lose “We make castanets out of your testicles”

Two of these lines you no doubt recognize as uttered by the obnoxious mocking French guard the Grail questers encounter on their journey. Played by John Cleese, the Frenchman gets some of the best lines in the film, including the offending “fart” and “testicles” bits (at 2:15 and 6:05 in the clip above). Forstater must have had a keen sense of just how funny—therefore how necessary—these lines were. In his suggestions to White, he writes,

I would like to get back to the Censor and agree to lose the shits, take the odd Jesus Christ out and lose Oh fuck off, but to retain ‘fart in your general direction’, ‘castanets of your testicles’ and ‘oral sex’ and ask him for an ‘A’ rating on that basis.

Unfortunately for Britain’s Python-loving kids and for the film’s investors, the AA rating stuck, at least until 2006, when it was re-rated for ages 12 and below in a theatrical re-release. This by contrast to its U.S. status, where the movie first scored a PG rating and was later upgraded to PG-13 (which didn’t exist in 1975) for its Blu-ray release. Monty Python and the Holy Grail has received a variety of mature ratings in various countries and—we should mention, since it’s Banned Books Week—has been entirely banned in Malaysia.

Another comedy team encountered similar difficulties with film ratings. The South Park duo—similarly adept at pitching potty jokes to grown-ups—ended up with an R for the feature length Bigger, Longer & Uncut, though censors originally wanted an NC-17. See the cuts the MPAA recommended for that film in Matt Stone’s legendary response memo to the ratings board and read the full transcript of the Python letter at Letters of Note.