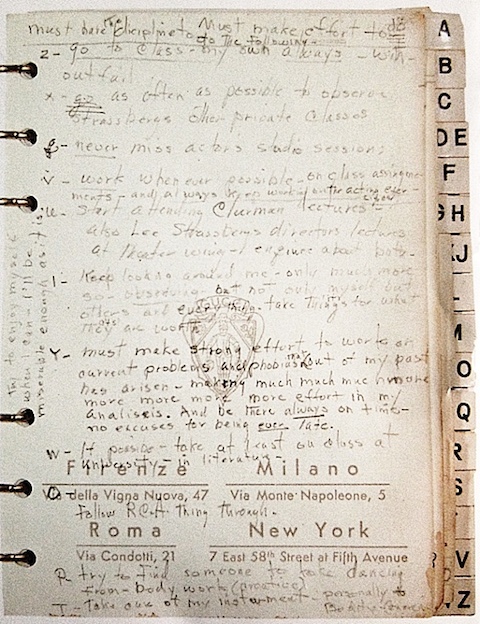 The common conception of New Year’s resolutions frames them as disposable ideals, not to be taken too seriously or followed through past the first few months of winter; by spring, we all assume, we’ll be right back to our slothful, gluttonous ways. Perhaps the problem lies in the way we approach this yearly ritual. Lists of the most common resolutions tend towards the almost shockingly banal, such that most people’s desires for change are interchangeable with their friends and neighbors and might as well be scripted by greeting card companies. I’d hazard it’s impossible to be passionate about half-thoughts and boilerplate ambition.

But there are those few people who really pour their hearts into it, creating lists so individualized and authentic that the documents expose their inner lives, their hopes, fears, loves, struggles, and deep, personal yearnings and aspirations. One such list that circulates often, and which we featured last year, is this gem from Woody Guthrie circa 1943. It’s so completely him, so much in his voice, that no one else could have written it, even in parody. This year, we direct your attention to the list above, from Marilyn Monroe, written at the end of 1955 when the star was 29.

Already well-known for her acting in such fine films as All About Eve, Gentlemen Prefer Blondes, and The Seven Year Itch, Monroe had recently been accepted to Lee Strasberg’s Actors Studio. As Lists of Note puts it, “judging by this list, she was determined to make the most of her opportunities.” I’m not sure what to make of the odd use of random letters at the beginning of each resolution, but what the list does offer us is a glimpse into Monroe’s deep commitment—despite her feeling that her life was “miserable”—to growing and developing as an actor and a person.

See a full transcript of her list of resolutions below.

Must make effort to do

Must have the dicipline to do the following –

try to enjoy myself when I can – I’ll be miserable enough as it is.