One particularly distressing hallmark of late modernity can be characterized as a cultural loss of the future. Where we once delighted in imagining the turns civilization would take hundreds and even thousands of years ahead—projecting radical designs, innovative solutions, great explorations, and peculiar evolutionary developments—we now find the mode of forecasting has grown apocalyptic, as climate change and other catastrophic, man-made global phenomena make it difficult to avoid some very dire conclusions about humanity’s impending fate. We can add to this assessment the loss of what we may call the “long view” in our day-to-day lives.

As the Long Now Foundation co-founder Stewart Brand describes it, “civilization is revving itself into a pathologically short attention span,” driven by “the acceleration of technology, the short-horizon perspective of market-driven economics, the next-election perspective of democracies, or the distractions of personal multi-tasking.”

Such is the texture of modern existence, and though we may run our hands over it daily, remarking on how tightly woven the fabric is, we seem to have few-to-no mechanisms for unweaving—or even loosening—the threads. Enter the Long Now Foundation and its proposal of “both a mechanism and a myth” as a means encouraging “the long view and the taking of long-term responsibility.” 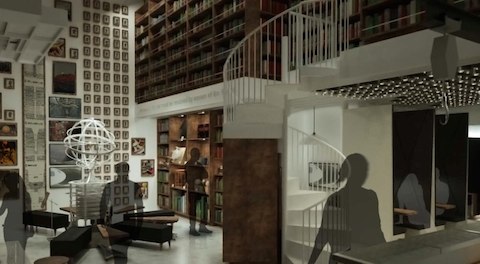 Image courtesy of Because We Can

Inspired by computer scientist Daniel Hill’s idea for a Stonehenge-sized clock that “ticks once a year, bongs once a century, and the cuckoo comes out every millennium,” the foundation proposes a number of projects and guidelines for restoring long-term thinking, including “minding mythic depth,” “rewarding patience,” and “allying with competition.” The clock, initially a thought experiment, is becoming a reality, as you can see in the short video above, with a massive, “monument scale” version under construction in West Texas and scale prototypes in London and the Long Now Foundation’s San Francisco headquarters. Largely a symbolic gesture, the “10,000 year clock,” as it’s called, has been joined with another, eminently practical undertaking reminiscent of Isaac Asimov’s Encyclopedia Galactica—a “library of the deep future.”

One wing of this library, the Manual for Civilization, aims to compile a collection of 3,500 books in the Foundation’s physical space—books deemed most likely to “sustain or rebuild civilization.” To begin the project, various future-minded contributors have been asked to make their own lists of books to add. The first list comes from musician/composer/producer/musical futurist and founding board member Brian Eno, who named the foundation. Other notable contributors include Long Now Foundation president Stewart Brand and board member and co-founder of Wired magazine Kevin Kelly. Below, see the first ten titles from each of these futurist’s lists, and further down, links to the full list of contributors’ selections so far. As you scan the titles below, and browse through each contributor’s list, consider why and how each of these books would help humanity rebuild civilization, and suggest books of your own in the comments.

Once again, these are only excerpts from longer lists by these three futuristic thinkers. For their complete selections, click on their lists below, as well as those from such cultural figures as sci-fi writer Neal Stephenson and Brain Pickings’ editor Maria Popova. And please let us know: Which books would you include in the “Manual for Civilization” library project, and why? You can also add your own suggestions for the growing library at the Long Now Foundation’s website.