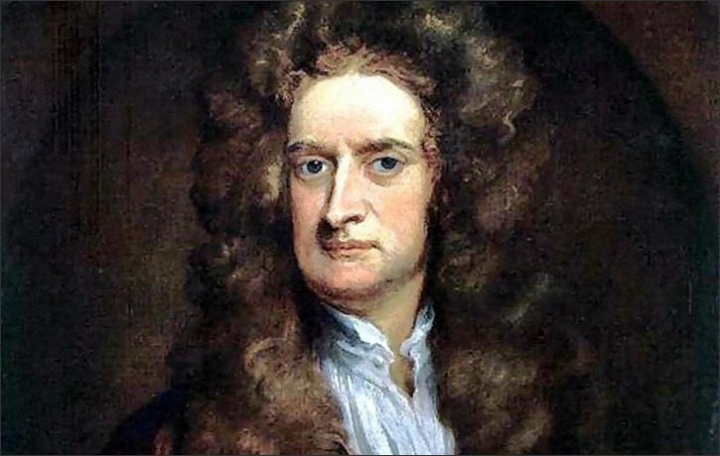 Sir Isaac Newton, arguably the most important and influential scientist in history, discovered the laws of motion and the universal force of gravity. For the first time ever, the rules of the universe could be described with the supremely rational language of mathematics. Newton’s elegant equations proved to be one of the inspirations for the Enlightenment, a shift away from the God-centered dogma of the Church in favor of a worldview that placed reason at its center. The many leaders of the Enlightenment turned to deism if not outright atheism. But not Newton.

In 1936, a document of Newton’s dating from around 1662 was sold at a Sotheby’s auction and eventually wound up at the Fitzwilliam Museum in Cambridge, England. The Fitzwilliam Manuscript has long been a source of fascination for Newton scholars. Not only does the notebook feature a series of increasingly difficult mathematical problems but also a cryptic string of letters reading:

If you can solve this, there are some people in Cambridge who would like to talk to you.

But what makes the document really interesting is how incredibly personal it is. Newton rattles off a laundry list of sins he committed during his relatively short life – he was around 20 when he wrote this, a student at Cambridge. He splits the list into two categories, before Whitsunday 1662 and after. (Whitsunday is, by the way, the Sunday of the feast of Whitsun, which is celebrated seven weeks after Easter.) Why he decided on that particular date to bifurcate his timeline isn’t immediately clear.

Some of the sins are rather opaque. I’m not sure what, for instance, “Making a feather while on Thy day” means exactly but it sure sounds like a long lost euphemism. Other sins like “Peevishness with my mother” are immediately relatable as good old-fashioned teenaged churlishness. You can see the full list below. And you can read the full document over at the Newton Project here.

1. Vsing the word (God) openly
2. Eating an apple at Thy house
3. Making a feather while on Thy day
4. Denying that I made it.
5. Making a mousetrap on Thy day
6. Contriving of the chimes on Thy day
7. Squirting water on Thy day
8. Making pies on Sunday night
9. Swimming in a kimnel on Thy day
10. Putting a pin in Iohn Keys hat on Thy day to pick him.
11. Carelessly hearing and committing many sermons
12. Refusing to go to the close at my mothers command.
13. Threatning my father and mother Smith to burne them and the house over them
14. Wishing death and hoping it to some
15. Striking many
16. Having uncleane thoughts words and actions and dreamese.
17. Stealing cherry cobs from Eduard Storer
18. Denying that I did so
19. Denying a crossbow to my mother and grandmother though I knew of it
20. Setting my heart on money learning pleasure more than Thee
21. A relapse
22. A relapse
23. A breaking again of my covenant renued in the Lords Supper.
24. Punching my sister
25. Robbing my mothers box of plums and sugar
26. Calling Dorothy Rose a jade
27. Glutiny in my sickness.
28. Peevishness with my mother.
29. With my sister.
30. Falling out with the servants
31. Divers commissions of alle my duties
32. Idle discourse on Thy day and at other times
33. Not turning nearer to Thee for my affections
34. Not living according to my belief
35. Not loving Thee for Thy self.
36. Not loving Thee for Thy goodness to us
37. Not desiring Thy ordinances
38. Not long {longing} for Thee in {illeg}
39. Fearing man above Thee
40. Vsing unlawful means to bring us out of distresses
41. Caring for worldly things more than God
42. Not craving a blessing from God on our honest endeavors.
43. Missing chapel.
44. Beating Arthur Storer.
45. Peevishness at Master Clarks for a piece of bread and butter.
46. Striving to cheat with a brass halfe crowne.
47. Twisting a cord on Sunday morning
48. Reading the history of the Christian champions on Sunday

49. Glutony
50. Glutony
51. Vsing Wilfords towel to spare my own
52. Negligence at the chapel.
53. Sermons at Saint Marys (4)
54. Lying about a louse
55. Denying my chamberfellow of the knowledge of him that took him for a sot.
56. Neglecting to pray 3
57. Helping Pettit to make his water watch at 12 of the clock on Saturday night