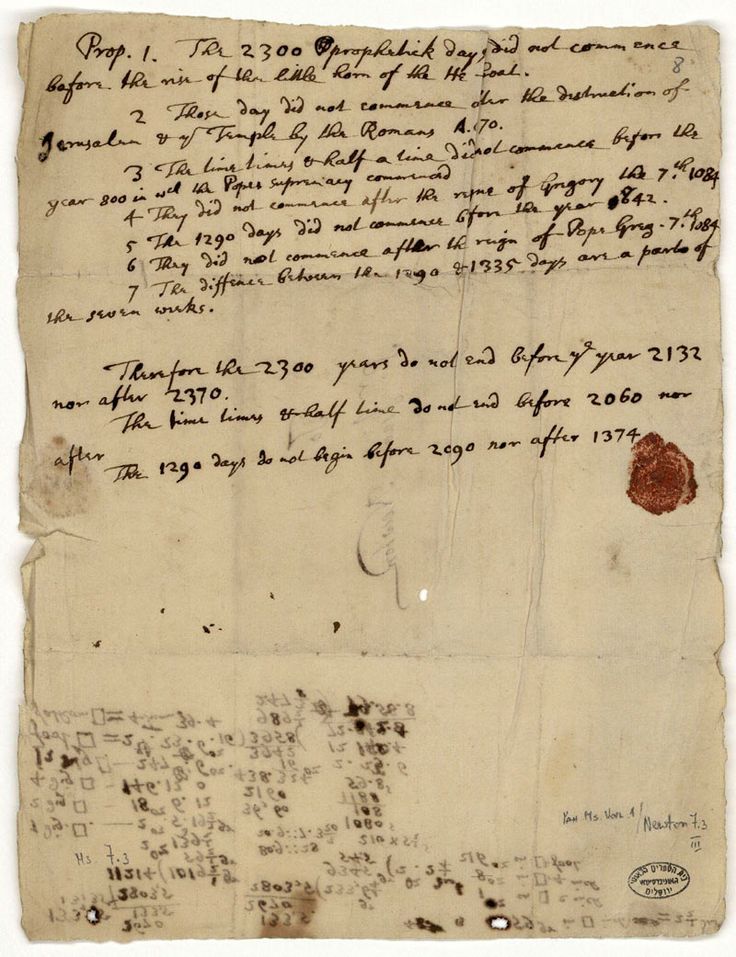 We have become quite used to pronouncements of doom, from scientists predicting the sixth mass extinction due to the measurable effects of climate change, and from religionists declaring the apocalypse due to a surfeit of sin. It’s almost impossible to imagine these two groups of people agreeing on anything other than the ominous portent of their respective messages. But in the early days of the scientific revolution—the days of Shakespeare contemporary Francis Bacon, and later 17th century Descartes—it was not at all unusual to find both kinds of reasoning, or unreasoning, in the same person, along with beliefs in magic, divination, astrology, etc.

Yet even in this maelstrom of heterodox thought and practices, Sir Isaac Newton stood out as a particularly odd co-existence of esoteric biblical prophecy, occult beliefs, and a rigid, formal mathematics that not only adhered to the inductive scientific method, but also expanded its potential by applying general axioms to specific cases.

Yet many of Newton’s general principles would seem totally inimical to the naturalism of most physicists today. As he was formulating the principles of gravity and three laws of motion, for example, Newton also sought the legendary Philosopher’s Stone and attempted to turn metal to gold. Moreover, the devoutly religious Newton wrote theological treatises interpreting Biblical prophecies and predicting the end of the world. The date he arrived at? 2060. 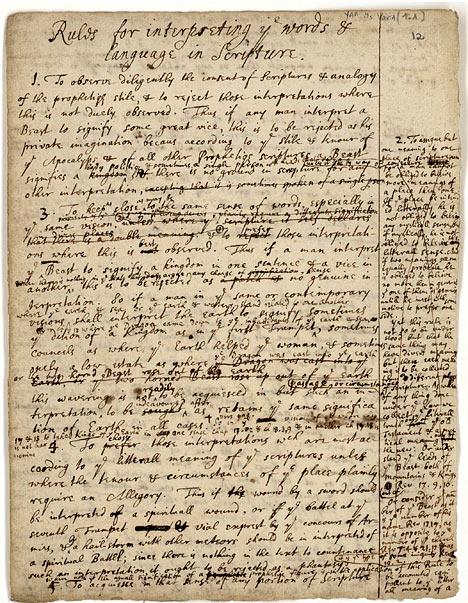 Newton seems, writes science blog Another Pale Blue Dot, “as confident of his predictions in this realm as he was in the rational world of science.” In a 1704 letter exhibited at Jerusalem’s Hebrew University, above, Newton describes his “recconing”:

So then the time times & half a time are 42 months or 1260 days or three years & an half, recconing twelve months to a yeare & 30 days to a month as was done in the Calendar of the primitive year. And the days of short lived Beasts being put for the years of lived [sic] kingdoms, the period of 1260 days, if dated from the complete conquest of the three kings A.C. 800, will end A.C. 2060. It may end later, but I see no reason for its ending sooner.

Newton further demonstrates his confidence in the next sentence, writing that his intent, “though not to assert” an answer, should in any event “put a stop the rash conjectures of fancifull men who are frequently predicting the time of the end.” Indeed. So how did he arrive at this number? Newton applied a rigorous method, that is to be sure.

If you have the patience for exhaustive description of how he worked out his prediction using the Book of Daniel, you may read one here by historian of science Stephen Snobelen, who also points out how widespread the interest in Newton’s odd beliefs has become, reaching across every continent, though scholars have known about this side of the Enlightenment giant for a long time.

For a sense of the exacting, yet completely bizarre flavor of Newton’s prophetic calculations, see another Newton letter at the of the post, transcribed below.

Prop. 1. The 2300 prophetick days did not commence before the rise of the little horn of the He Goat.

2 Those day [sic] did not commence a[f]ter the destruction of Jerusalem & ye Temple by the Romans A.[D.] 70.

The editorial insertions are Professor Snobelen’s, who thinks the letter dates “from after 1705,” and that “the shaky handwriting suggests a date of composition late in Newton’s life.” Whatever the exact date, we see him much less certain here; Newton pushes around some other dates—2344, 2090 (or 2132), 2374. All of them seem arbitrary, but “given the nice roundness of the number,” writes Motherboard, “and the fact that it appears in more than one letter,” 2060 has become his most memorable dating for the apocalypse.

It’s important to note that Newton didn’t believe the world would “end” in the sense of cease to exist or burn up in holy flames. His end times philosophy resembles that of a surprising number of current day evangelicals: Christ would return and reign for a millennium, the Jewish diaspora would return to Israel and would, he wrote, set up “a flourishing and everlasting Kingdom.” We hear such statements often from televangelists, school boards, governors, and presidential candidates.

As many people have argued, despite Newton’s conception of his scientific work as a bulwark against other theologies, it ultimately became a foundation for Deism and Naturalism, and has allowed scientists to make accurate predictions for hundreds of years. 20th century physics may have shown us a much more radically unstable universe than Newton ever imagined, but his theories are, as Isaac Asimov would put it, “not so much wrong as incomplete,” and still essential to our understanding of certain fundamental phenomena. But as fascinating and curious as Newton’s other interests may be, there’s no more reason to credit his prophetic calculations than those of the Millerites, Harold Camping, or any other apocalyptic doomsday sect.

M.I.T. Computer Program Predicts in 1973 That Civilization Will End by 2040

The Iconic Design of the Doomsday Clock Was Created 75 Years Ago: It Now Says We’re 100 Seconds to Midnight