How Cultured Are You? Test Your Knowledge With Cultural Quizzes from 1958 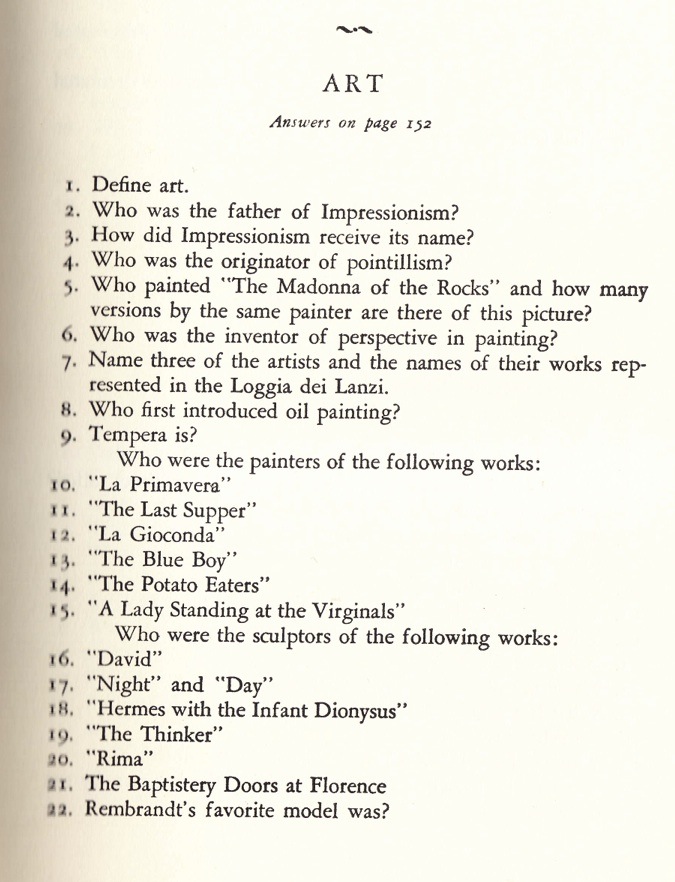 Do you consider yourself well-educated? Cultured, even? By whose standards?

We may superficially assume these terms name immutable qualities, but they are in any analysis dependent on where and when we happen to be situated in history. The most sophisticated of Medieval doctors—a title then closer to the European “docent” than our general use of Dr.—would appear profoundly ignorant to us; and we, with our painfully inadequate grasp of church Latin, Aristotelianism, and arcane theological arguments, would appear profoundly ignorant to him.

What does it mean to be cultured? Is it the acquisition of mostly useless cultural capital for its own sake, or of a set of codes that helps us navigate the world successfully? In an attempt to address these fraught questions, Ashley Montagu, a student of hugely influential German-born anthropologist Franz Boas, wrote The Cultured Man in 1958. Rebecca Onion at Slate describes the book as containing “quizzes for 50 categories of knowledge in the arts and sciences, with 30 questions each.” In the page above, we have the first 22 questions of Montagu’s “Art” quiz (with the answers here).

You’ll probably notice right away that while most of the questions have definite, unambiguous answers, others like “Define art,” seem patently unanswerable in all but the most general and unsatisfactory ways. Montagu defines art in one succinct sentence: “Art is the making or doing of things that have form and beauty”—which strikes me as anemic, though functional enough. 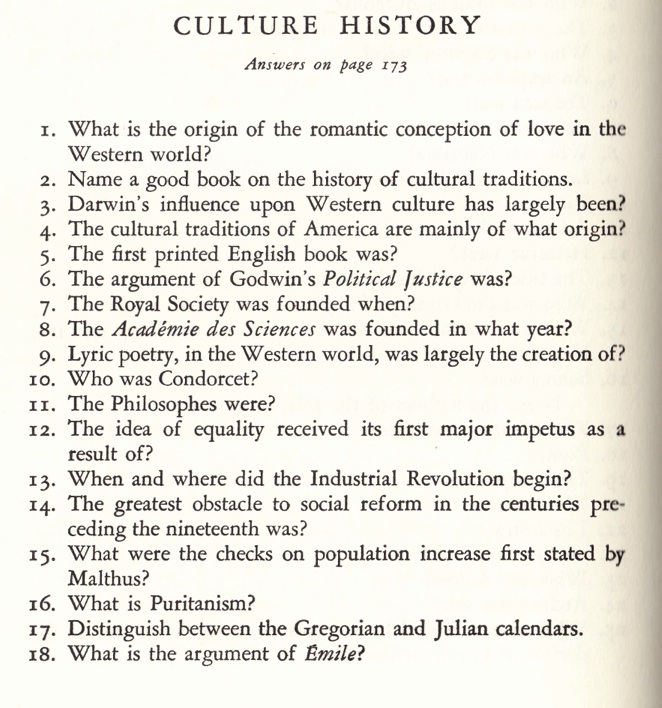 Montagu intended his book to test not only knowledge of cultural facts, but also of “attitudes”: a person “considered ‘cultured,’” writes Onion, “would not just be able to readily summon facts, but also to access humane feelings, which would necessarily come about after contact with culture.” Many administrators of “culture”—curators, art historians, literature professors, etc—would agree with the premise: ideally, the more cultural knowledge we acquire, the more empathy and understanding of other peoples and cultures we should manifest. Whether this routinely occurs in practice is another matter. For Montagu, Onion remarks, a “cultured man” is “curious, unprejudiced, rational, and ethical.” 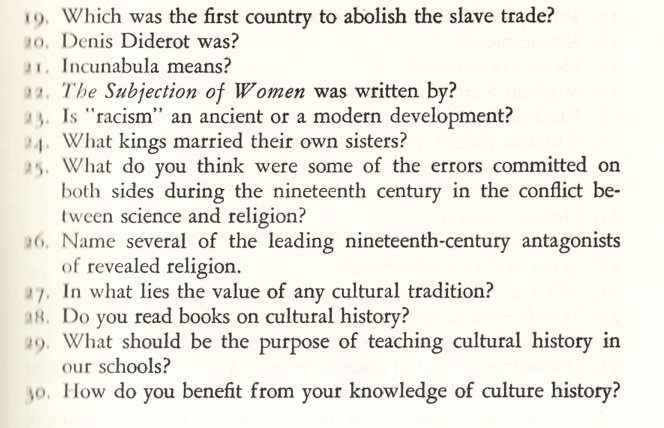 Given Montagu’s enlightened philosophical bent, we can charitably ascribe language in his book that itself seems prejudiced to our viewing this artifact from a distance of almost seventy years in the future. We might also find that many of his questions push us to examine our 21st century biases more carefully. His approach may remind us of frivolous internet diversions or the standardized tests we’ve grown to think of as the precise opposite of lively, critically-engaged educational tools. Yet Montagu intended his quizzes to be “both dynamic and constructive,” to alert readers to areas of ignorance and encourage them to fill gaps in their cultural knowledge. Many of his answers offer references for further study. “No one grows who stands still,” he wrote.

To see more of Montagu’s quiz questions—such as those above from the “Culture History” category (get the answers here)—and find out how you stack up against the cultured elite of the 50s, head over to Rebecca Onion’s post at Slate.