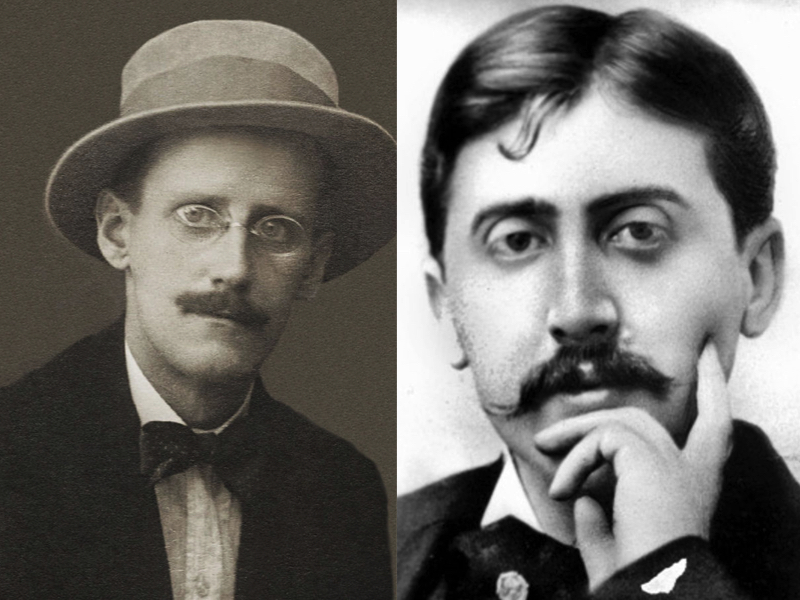 When we invoke the names of famous artists of the past, we refer to their most hallowed work—Orson Welles simultaneously means Citizen Kane, for example, or War of the Worlds, and H.G. Wells means The Time Machine or…  War of the Words. It happens that when these two artists got together in 1940, they found that their worlds, which had already met in Welles’ notorious broadcast, had quite a lot to say to each other, genially trading stories, ideas, and mutual admiration.

Another historic meeting between two artists we might consider kindred, James Joyce of Ulysses fame and Marcel Proust of In Search of Lost Time, did not produce such a rich exchange. As Irish critic Arthur Power remarked, “Here are the two greatest literary figures of our time meeting and they ask each other if they like truffles.”

That, at least, is one account of the occasion in May of 1922, near the end of Proust’s life. The meeting took place at a party for Igor Stravinsky and Sergei Diaghilev at the Majestic Hotel. Though both novelists propelled their greatest work forward by extrapolating from their favorite subject, themselves, the selves in their work are expansive and vast, taking in whole cities, nations, and social worlds. Both were voracious readers with incredible memories (as we certainly know of Proust) and an intuitive grasp of the cultural mechanisms of modernity. Such serious conversations the two of them might have….

But one attendee, William Carlos Williams, paints a much more comic picture…..

Joyce, writes Ben Jackson at the London Review of Books, “arrived drunk and poorly dressed; Proust, draped in furs, opened the door.” Then, writes Williams, the two men sat in chairs side by side, while “partisans” waited for “the wits to sparkle and flash.” Instead, they kvetched in the sports-and-weather small talk of two elderly men meeting in a doctor’s waiting room, or two Samuel Beckett characters, beset by petty complaints of ultimate importance.

Joyce said, “I’ve headaches every day. My eyes are terrible.”
Proust replied, “My poor stomach. What am I going to do? It’s killing me. In fact, I must leave at once.”
“I’m in the same situation,’ replied Joyce. ‘If I can find someone to take me by the arm. Goodbye!”
“Charmé,” said Proust. “Oh, my stomach, my stomach.”

Ford Madox Ford confirms the account, but the party’s host, novelist Sydney Schiff denied it, reports Joyce’s most respected biographer Richard Ellmann. Ellmann doesn’t seem to favor one version or another, but he does give us Joyce’s own version, multiply attested. The Ulysses author remembered that their “talk consisted solely of the word ‘No.’ Proust asked me if I knew the duc du so-and-so. I said, ‘No.’” Proust was asked if he’d read Ulysses, and likewise replied in the negative. “The situation,” Joyce remembered, “was impossible.” Other guests remembered the meeting similarly.

In yet another version, we see the aftermath of their conference—in a story that resembles many an end-of-the-night-gone-sour scenario. Sydney Schiff’s wife Violet recalled Joyce drunkenly inviting himself into a taxi with the two of them and Proust, and promptly opening the window. “Knowing Proust’s deadly fear of drafts,” writes a Proust site, Violet “immediately closed the window.” When the cab arrived at Proust’s apartment, the French novelist “urged the Irishman to let the taxi take him home,” then “fled to his apartment.”

The many conflicting renditions all seem to agree on one thing: the meeting was a wash. Nonetheless, one author recently published what purports to be an entire book on the subject. Even he concludes “no one can say for certain exactly what they said to each other.” It’s tempting to think things might have gone otherwise, had they met earlier or in different circumstances, given Joyce’s tendency to get too drunk and Proust’s ill health and aversion to, well, company. The New Inquiry cites a remark Joyce made to Samuel Beckett about Proust: “If we had been allowed to meet and have a talk somewhere….”

Although it’s said that both writers confessed to not having read the other, Jackson notes that when Joyce “did admit to passing his eyes over a few pages he declared that he did not see ‘any special talent.’” He also confessed to some envy of Proust’s comfortable circumstances. Proust, who died six months later, left no mention of their meeting.