“Did they have color in the past?” This question, one often hears, ranks among the darndest things said by kids, or at least kids who have learned a little about history, but not the history of photography. But even the kids who get seriously swept up in stories and images of the past might hold on to the misconception, given how thoroughly time has monochromatized the artifacts of previous civilizations. As much as such precocious youngsters have always learned from trips to the museum to see, for instance, ancient Greek statues, they haven’t come away with an accurate impression of how they really looked in their day.

Recent research has begun to change that. “To us, classical antiquity means white marble,” writes Smithsonian magazine’s Matthew Gurewitsch. “Not so to the Greeks, who thought of their gods in living color and portrayed them that way too. The temples that housed them were in color, also, like mighty stage sets. Time and weather have stripped most of the hues away. And for centuries people who should have known better pretended that color scarcely mattered.” But today, the right mix of inspection with ultraviolet light and infrared and x-ray spectroscopy has made it possible to figure out the very colors with which these apparently colorless statues once called out to the eye.

Enter German archaeologist Vinzenz Brinkmann, who, “armed with high-intensity lamps, ultraviolet light, cameras, plaster casts and jars of costly powdered minerals,” has “spent the past quarter century trying to revive the peacock glory that was Greece” by “creating full-scale plaster or marble copies hand-painted in the same mineral and organic pigments used by the ancients: green from malachite, blue from azurite, yellow and ocher from arsenic compounds, red from cinnabar, black from burned bone and vine.” You can see the results in the Getty Museum video at the top of the post. 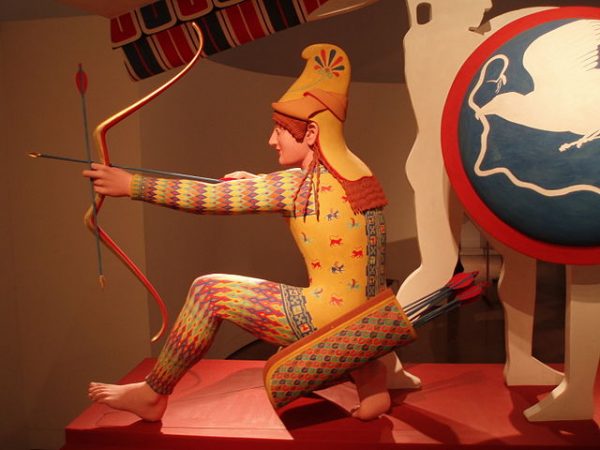 In the years since the discovery of ancient Greek statues’ original colors, the reactions of us moderns have, shall we say, varied. We’ve grown accustomed to, and grown to admire, the austerity of white marble, which we’ve come to associate with an idea of the purity of antiquity. (The Getty itself used a similarly evocative stone, extensively and at staggering expense, in the construction of their Richard Meier-designed complex overlooking Los Angeles.) And so the bold colors revealed by Brinkmann and his collaborators may, on first or even second glance, strike us as gaudy, kitschy, tacky. However you re-evaluate its aesthetics, though, you have to feel a certain exhilaration at the fact that the ancient world has continued to hold surprises for us.

The image above is an archer from the western pediment of the Temple of Aphaia on Aigina, via Wikimedia Commons.