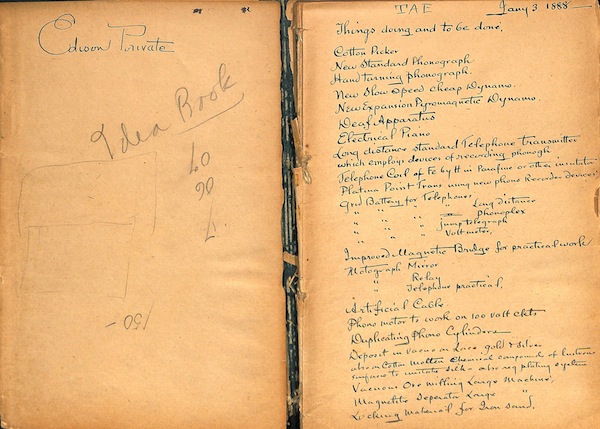 Even beyond developing the phonograph, the motion picture camera, light bulb, and the creepy talking doll, Thomas Edison got a lot done in life. With his even greater knack for enterprise than for invention, he might, had he lived in the 21st century, traded on his reputation for productivity and industry by selling us his personal “life hacks.” Alas, those in search of Edisonian tips and tricks for living must infer them from all the materials he left behind after a life that stretched from the mid-19th century to nearly the mid-20th, such as this extensive to-do list from January 3, 1888.

“Throughout his life, Thomas Edison kept ‘idea books’ filled with to-do lists, sketches and other notes on current and future projects,” says the site of PBS’ American Experience. Just over a month after opening his new lab in West Orange, New Jersey, “Edison created a five-page list of ‘Things doing and to be done.’

That year alone, Edison would execute 45 patents, primarily concerned with the phonograph and cylinder records. Alexander Graham Bell and his associates had begun to make improvements on Edison’s decade-old phonograph, which pushed Edison into action. Despite this competition, Edison’s ‘To Do’ list shows that the phonograph wasn’t the only thing on the inventor’s mind.”

These five pages of things to acquire or create (see the full list below) include not just the “New Standard Phonograph” but an “Improved Magnetic Bridge for practical work,” “Uninflammable Insulating Material,” a “Box balancing System,” “Artificial Mother Pearl,” “Butter direct from Milk,” “Artificial Ivory,” “Marine Telegraphy,” and a “Long distance standard Telephone Transmitter which employs devices of recording phonograph.” While not all the ideas that inspired, or were inspired by, the items on this long list came to fruition, Edison clearly saw value in getting them all out of his head and on paper. One wonders what the man who declared that “genius is one percent inspiration, ninety-nine percent perspiration” would make of the countless organization and productivity tools now on the market. Nobody ever perspired because of using an app, after all — but plenty have perspired developing them.

Things doing and to be done: