The phone gives us a lot but it takes away three key elements of discovery: loneliness, uncertainty and boredom. Those have always been where creative ideas come from. – Lynda Barry

In the spring of 2016, the great cartoonist and educator, Lynda Barry, did the unthinkable, prior to giving a lecture and writing class at NASA’s Goddard Space Flight Center.

She demanded that all participating staff members surrender their phones and other such personal devices.

Her victims were as jangled by this prospect as your average iPhone-addicted teen, but surrendered, agreeing to write by hand, another antiquated notion Barry subscribes to:

The delete button makes it so that anything you’re unsure of you can get rid of, so nothing new has a chance. Writing by hand is a revelation for people. Maybe that’s why they asked me to NASA – I still know how to use my hands… there is a different way of thinking that goes along with them.

Barry—who told the Onion’s AV Club that she crafted her book What It Is with an eye toward bored readers stuck in a Jiffy Lube oil-change waiting room—is also a big proponent of doodling, which she views as a creative neurological response to boredom:

Boring meeting, you have a pen, the usual clowns are yakking. Most people will draw something, even people who can’t draw. I say “If you’re bored, what do you draw?” And everybody has something they draw. Like “Oh yeah, my little guy, I draw him.” Or “I draw eyeballs, or palm trees.” … So I asked them “Why do you think you do that? Why do you think you doodle during those meetings?” I believe that it’s because it makes having to endure that particular situation more bearable, by changing our experience of time. It’s so slight. I always say it’s the difference between, if you’re not doodling, the minutes feel like a cheese grater on your face. But if you are doodling, it’s more like Brillo.  It’s not much better, but there is a difference. You could handle Brillo a little longer than the cheese grater.

Meetings and classrooms are among the few remaining venues in which screen-addicted moths are expected to force themselves away from the phone’s inviting flame. Other settings—like the Jiffy Lube waiting room—require more initiative on the user’s part.

Once, we were keener students of minor changes to familiar environments, the books strangers were reading in the subway, and those strangers themselves. Our subsequent observations were known to spark conversation and sometimes ideas that led to creative projects.

Now, many of us let those opportunities slide by, as we fill up on such fleeting confections as Candy Crush, funny videos, and all-you-can-eat servings of social media. 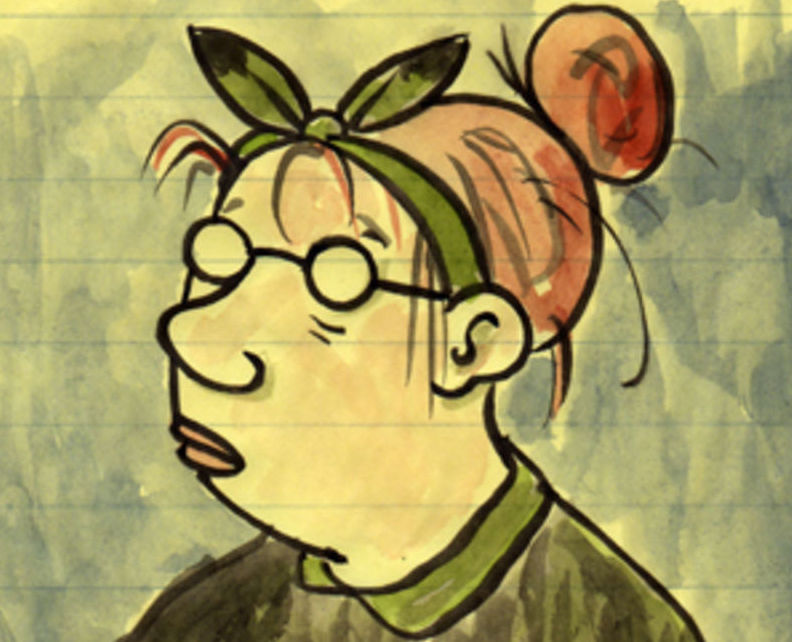 It’s also tempting to use our phones as defacto shields any time social anxiety looms. This dodge may provide short term comfort, especially to younger people, but remember, Barry and many of her cartoonist peers, including Daniel Clowes, Simon Hanselmann, and Ariel Schrag, toughed it out by making art. That’s what got them through the loneliness, uncertainty, and boredom of their middle and high school years.

The book you hold in your hands would not exist had high school been a pleasant experience for me… It was on those quiet weekend nights when even my parents were out having fun that I began making serious attempts to make stories in comics form.

Barry is far from alone in encouraging adults to peel themselves away from their phone dependency for their creative good.

Photographer Eric Pickersgill’s Removed imagines a series of everyday situations in which phones and other personal devices have been rendered invisible. (It’s worth noting that he removed the offending articles from the models’ hands, rather that Photoshopping them out later.)

Author Manoush Zomorodi’s recent TED Talk on how boredom can lead to brilliant ideas, below, details a weeklong experiment in battling smartphone habits, with lots of scientific evidence to back up her findings.

But what if you wipe the slate of digital distractions only to find that your brain’s just… empty? A once occupied room, now devoid of anything but dimly recalled memes, and generalized dread over the state of the world?

The aforementioned 2010 AV Club interview with Barry offers both encouragement and some useful suggestions that will get the temporarily paralyzed moving again:

I don’t know what the strip’s going to be about when I start. I never know. I oftentimes have—I call it the word-bag. Just a bag of words. I’ll just reach in there, and I’ll pull out a word, and it’ll say “ping-pong.” I’ll just have that in my head, and I’ll start drawing the pictures as if I can… I hear a sentence, I just hear it. As soon as I hear even the beginning of the first sentence, then I just… I write really slow. So I’ll be writing that, and I’ll know what’s going to go at the top of the panel. Then, when it gets to the end, usually I’ll know what the next one is. By three sentences or four in that first panel, I stop, and then I say “Now it’s time for the drawing.” Then I’ll draw. But then I’ll hear the next one over on another page! Or when I’m drawing Marlys and Arna, I might hear her say something, but then I’ll hear Marlys say something back. So once that first sentence is there, I have all kinds of choices as to where I put my brush. But if nothing is happening, then I just go over to what I call my decoy page. It’s like decoy ducks. I go over there and just start messing around.

The Case for Deleting Your Social Media Accounts & Doing Valuable “Deep Work” Instead, According to Prof. Cal Newport