What Makes The Death of Socrates a Great Work of Art?: A Thought-Provoking Reading of David’s Philosophical & Political Painting

When we think of political propaganda, we do not typically think of French Neoclassical painter Jacques-Louis David. There’s something debased about the term—it stinks of insincerity, staginess, emotional manipulation, qualities that cannot possibly belong to great art. But let us put aside this prejudice and consider David’s 1787 The Death of Socrates. Created two years before the start of the French Revolution, the painting “gave expression to the principle of resisting unjust authority,” and—like its source, Plato’s Phaedo—it makes a martyr of its hero, who is the soul of reason and a thorn in the side of dogma and tradition.

Nonetheless, as Evan Puschak, the Nerdwriter, shows us in the short video above, The Death of Socrates situates itself firmly within the traditions of European art, drawing heavily on classical sculptures and friezes as well as the greatest works of the Renaissance. There are echoes of da Vinci’s Last Supper in the number of figures and their placement, and a distinct reference of Raphael’s School of Athens in Socrates’ upward-pointing finger, which belongs to Plato in the earlier painting. Here, David has Plato, already an old man, seated at the foot of the bed, the scene arranged behind him as if “exploding from the back of his head.”

Socrates, says Puschak, “has been discussing at length the immortality of the soul, and he doesn’t even seem to care that he’s about to take the implement of his death in hand. On the contrary, Socrates is defiant… David idealizes him… he would have been 70 at the time and somewhat less muscular and beautiful than painted here.” He is a “symbol of strength over passion, of stoic commitment to an abstract ideal,” a theme David articulated with much less subtlety in an earlier painting, The Oath of the Horatii, with its Roman salutes and bundled swords—a “severe, moralistic canvas,” with which the artist “effectively invented the Neoclassical style.”

In The Death of Socrates, David refines his moralistic tendencies, and Puschak ties the composition loosely to a sense of prophecy about the coming Terror after the storming of the Bastille. The Nerdwriter summation of the painting’s angles and influences does help us see it anew. But Puschak’s vague historicizing doesn’t quite do the artist justice, failing to mention David’s direct part in the wave of bloody executions under Robespierre.

David was an active supporter of the Revolution and designed “uniforms, banners, triumphal arches, and inspirational props for the Jacobin Club’s propaganda,” notes a Boston College account. He was also “elected a Deputy form the city of Paris, and voted for the execution of Louis XVI.” Historians have identified over “300 victims for whom David signed execution orders.” The severity of his earlier classical scenes comes into greater focus in The Death of Socrates around the central figure, a great man of history, one whose heroic feats and tragic sacrifices drive the course of all events worth mentioning.

Indeed, we can see David’s work as a visual precursor to philosopher and historian Thomas Carlyle’s theories of “the heroic in history.” (Carlyle also happened to write the 19th century’s definitive history of the French Revolution.) In 1793, David took his visual great man theory and Neoclassical style and applied them for the first time to a contemporary event, the murder of his friend Jean-Paul Marat, Swiss Jacobin journalist, by the Girondist Charlotte Corday. (Learn more in the Khan Academy video above.) This is one of three canvases David made of “martyrs of the Revolution”—the other two are lost to history. And it is here that we can see the evolution of his political painting from classical allegory to contemporary propaganda, in a canvas widely hailed, along with The Death of Socrates, as one of the greatest European paintings of the age. 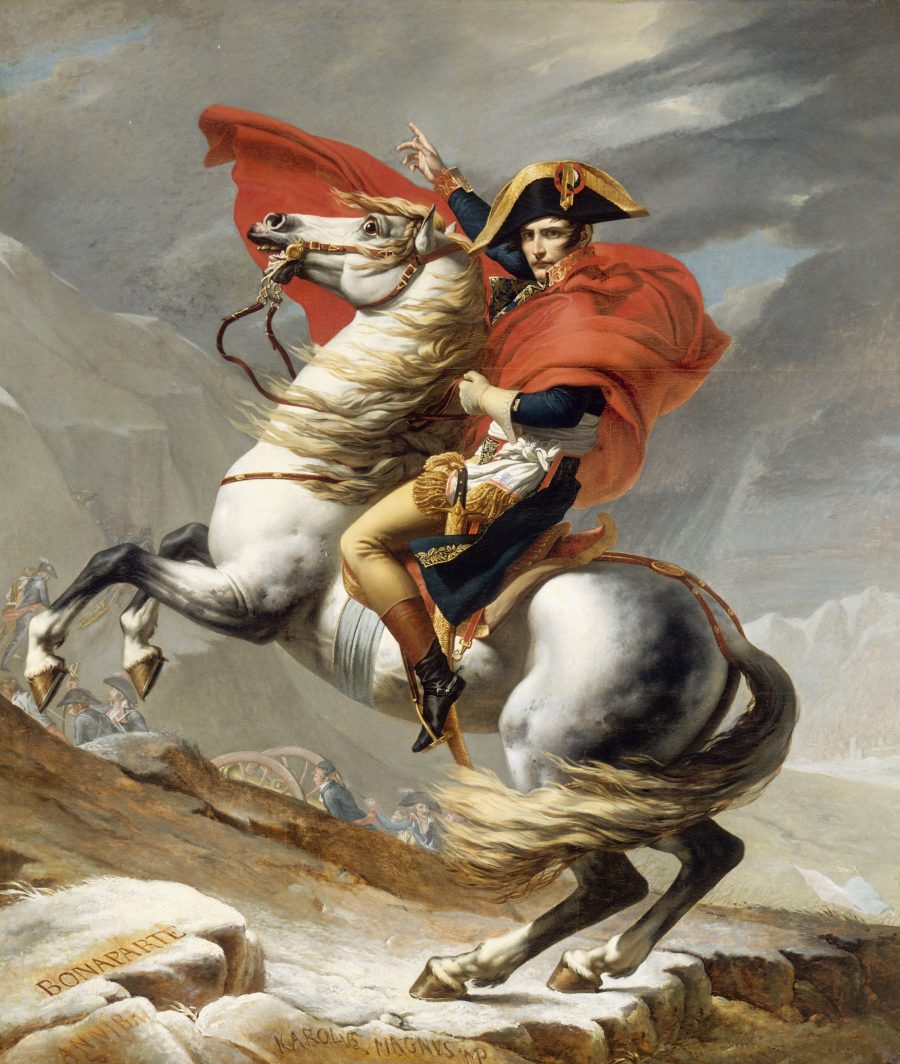 We can look to David for both formal mastery and didactic intent. But we should not look to him for political constancy. He was no John Milton—the poet of the English Revolution who was still devoted to the cause even after the restoration of the monarch. David, on the other hand, “could easily be denounced as a brilliant cynic,” writes Michael Glover at The Independent. Once Napoleon came to power and began his rapid ascension to the self-appointed role of Emperor, David quickly became court painter, and created the two most famous portraits of the ruler.

We’re quite familiar with The Emperor Napoleon in His Study at the Tuileries, in which the subject stands in an awkward pose, his hand thrust into his waistcoat. And surely know Napoleon at the Saint-Bernard Pass, above. Here, the finger pointing upward takes on an entirely new resonance than it has in The Death of Socrates. It is the gesture not of a man nobly prepared to leave the world behind, but of one who plans to conquer and subdue it under his absolute rule.

The Art of Restoring a 400-Year-Old Painting: A Five-Minute Primer