Watch an Episode of TV-CBGB, the First Rock ‘n’ Roll Sitcom Ever Aired on Cable TV (1981)

For a good long while, or at least a few decades, the best things on TV in the U.S. happened outside the major broadcast and national cable networks. And like a great many other cultural happenings of the previous century, you would have to live in New York to experience them. I mean, of course, the weird, wonderful world of Manhattan public access cable TV. Here you could watch, for example, Glenn O’Brien’s TV Party, created by the titular host as “a drug-fueled re-interpretation of Hugh Hefner’s Playboy After Dark”—as we noted in a recent post—and featuring the most cutting-edge artists and musicians of the day.

Around the same time, Andy Warhol conducted his version of a celebrity interview show on local cable, and as the banal infotainment of daytime talk show and 24-hour-cable news developed on mainstream TV, a dozen bizarre, hilarious, raunchy, and ridiculous interview and call-in shows took hold on New York cable access in the years to follow (some of them still exist).

I happened to catch the tail end of this golden era, which tapered off in the nineties as the internet took over for the communities these shows served. But oh, what it must have been like to watch the thriving downtown scene document itself on TV from week-to-week, alongside the legendarily flamboyant Manhattan subcultures that found their voices on cable access? 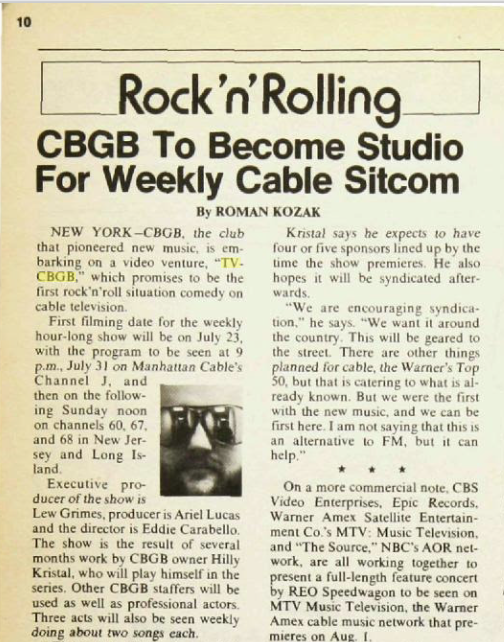 Quite a few people remember it well, and were thrilled when the video at the top emerged from obscurity: an episode of TV-CBGB shot in 1981, “an odd glimpse,” writes Martin Schneider at Dangerous Minds, “of a CBGB identity that never took shape, as a cable access mainstay.” It is unclear how many episodes of the show were shot, or aired, or still exist in some form, but what we do have above seems representative, according to two Billboard articles describing the show. The first, from July 11, 1981, called the project “the first rock’n’roll situation comedy on cable television.”

Created by CBGBs owner, Hilly Kristal, the show aimed to give viewers slices of life from the Bowery institution, which was already famous, according to Billboard, as “the club that pioneered new music.” Kristal told the trade magazine, “There will always be a plot, though a simple plot. It will be about what happens in the club, or what could happen.” He then goes on to describe a series of plot ideas which, thankfully, didn’t dominate the show—or at least what we see of it above. The episode is “90% performance,” though “not true concert footage,” Schneider writes. 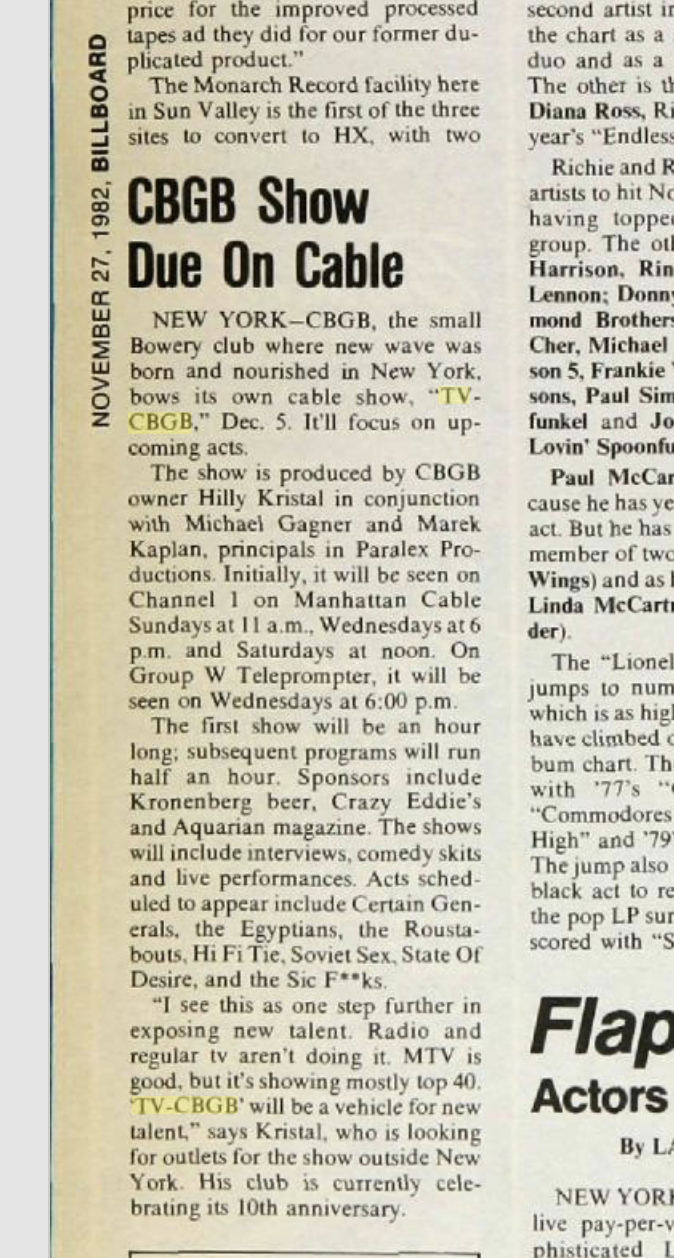 After an odd opening intro, we’re thrown into a song from Idiot Savant. Other acts include The Roustabouts, The Hard, Jo Marshall, Shrapnel, and Sic Fucks. While not among the best or most well-known to play at the club, these bands put on some excellent performances. By November of the following year, it seems the first episode had still not yet aired. Billboard quotes Kristal as calling TV-CBGB “one step further in exposing new talent. Radio and regular tv aren’t doing it. MTV is good, but it’s showing mostly top 40.”

Had the show migrated to MTV, Schneider speculates, it might have become a “national TV icon,” fulfilling Kristal’s vision for a new means of bringing obscure downtown New York musicians to the world at large. It might have worked. Though the sketches are lackluster, notable as historical curiosities, the music is what makes it worthwhile, and there’s some really fun stuff here—vital and dramatic. While these bands may not have had the mass appeal of, say, Blondie or the Ramones, they were stalwarts of the early 80s CBGB scene.

The awkward, strangely earnest, and often downright goofy skits portraying the goings-on in the lives of club regulars and employees are both somehow touching and tedious, but with a little polish and better direction, the whole thing might have played like a punk rock version of Fame—which maybe no one needed. As it stands, given the enthusiasm of several YouTube commenters who claim to have watched it at the time or been in the club themselves, the episode constitutes a strange and rare document of what was, if not what could have been.

Patti Smith Plays at CBGB In One of Her First Recorded Concerts, Joined by Seminal Punk Band Television (1975)