The End of an Era: MAD Magazine Will Publish Its Last Issue With Original Content This Fall 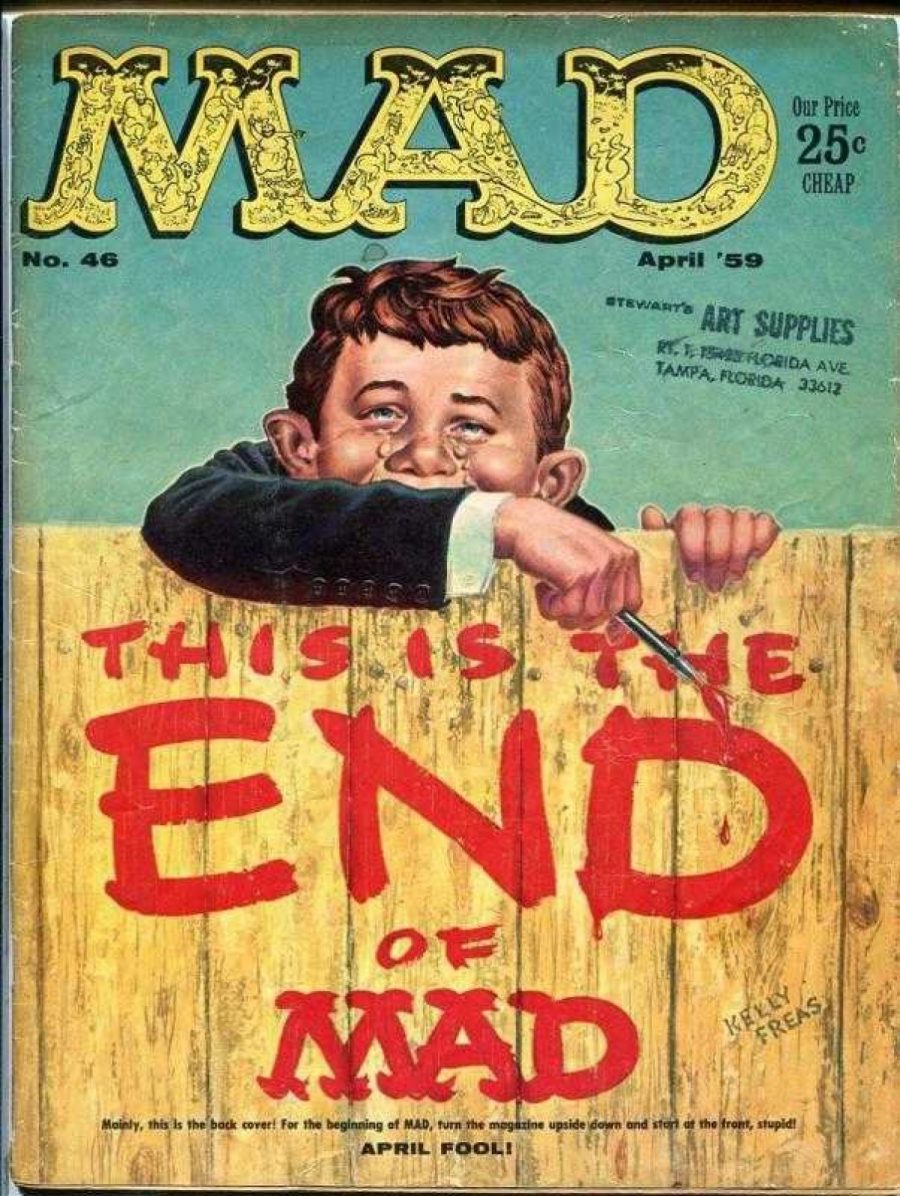 As a cultural reference, MAD magazine may have died decades ago. This is a not a disparagement, but a statement of fact. The kind of satire the august, anarchic comic first unleashed on the world of 1952 debuted in a cultural milieu that is no more, and a form—the illustrated, satirical periodical—that is increasingly niche. MAD left an indelible impression on American publishing’s past, but as the magazine’s legendary cartoonist Al Jaffee tells The Washington Post, “it’s mostly nostalgia now.”

Responding to the market’s cues, MAD will more or less disappear from newsstands, publishing legacy content on a subscription-only basis and on the direct market, “a.k.a. specialty and comic book stores,” writes Gizmodo, “like the vast majority of DC’s comics output is already.” MAD shaped itself in opposition to Cold War paranoia and never seemed to find a new edge after favorite targets like Richard Nixon and Ronald Reagan left the scene. The magazine turned almost exclusively to pop culture parody in the 90s. As ABC News reports, MAD “peaked at 2.8 million subscribers in 1973,” then began its decline, with only “140,000 left as of 2017.”

The magazine’s founding editor, cartoonist Harvey Kurtzman, passed away in 1993. His successor Al Feldstein, who brought the magazine to international prominence, died in 2014. MAD‘s longtime, tight-knit staff of writers and cartoonists are mostly retired, and most are sanguine about the winding down. “It’s been a logical development,” comments another MAD cartooning legend, Sergio Aragonés. To wit, after Issue 10 (MAD re-numbered last June) comes out this fall, there will be no new content, “except for the end-of-year specials,” notes The Post. “All issues after that will be republished content culled from 67 years of publication.”

This still represents a great way for newcomers to MAD to catch up on its wildly skewed view of the last half of the 20th century, though some imagination is required to appreciate how subversive their humor was for much of its run. MAD inspired countless offshoots in the decade after its founding, setting the tone for radical campus publications, countercultural cartoonists, and comic writers, some of whom went on to become Stephen Colbert and Judd Apatow, who both wrote in the pages of MAD about how much the magazine meant to them during their apprentice years.

The list of MAD devotees, both famous and not (I count myself among the latter), runs into the millions, but it runs along some obvious demographic divides. As the magazine is poised to become a gift-shop version of itself, tributes have poured in for its editors, writers, and cartoonists—all of them, to a man, well, men. And most of those tributes—those from prominent cartoonists and writers claiming MAD as a formative influence, at least—are also from men of a certain generation, most of them straight and white.

Such market segmentation, one might say, speaks to the way MAD‘s brand of political satire remained embedded in its heyday. As laid-back cartoonists Jaffee and Aragonés recognize, you can’t stay young and relevant forever—though MAD had a remarkably good run. The Post offers a notable example of Mad’s passage into history. When the current president “mockingly referred to Democratic presidential candidate Pete Buttigieg as Alfred E. Neuman”—the once-ubiquitous, gap-toothed symbol of take-no-prisoners irreverence—the 37-year-old Buttigieg replied, “I’ll be honest. I had to Google that.”