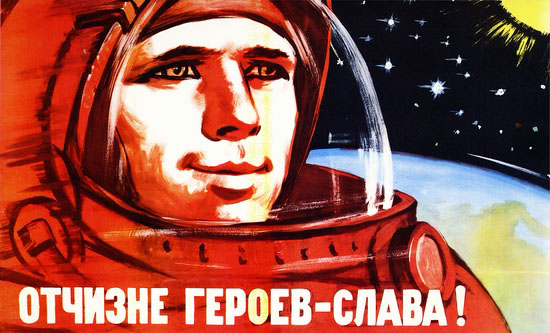 How do you sell a government program that spends tens of millions of dollars on research and development for space travel? While the average taxpayer may love the idea of braving new frontiers, far fewer are apt to vote for funding scientific research, the space program’s ostensible reason for being.

During the Cold War, however, when the biggest breakthroughs in space flight occurred, selling the program didn’t involve sophisticated methods, only the broadest themes of heroism, patriotism, futurism, and, in more or less subtle ways, militarism. The appeal to science always went hand-in-hand with an appeal to the sublimely austere beauty of the heavens (which we’d hate to lose to the other guys.) 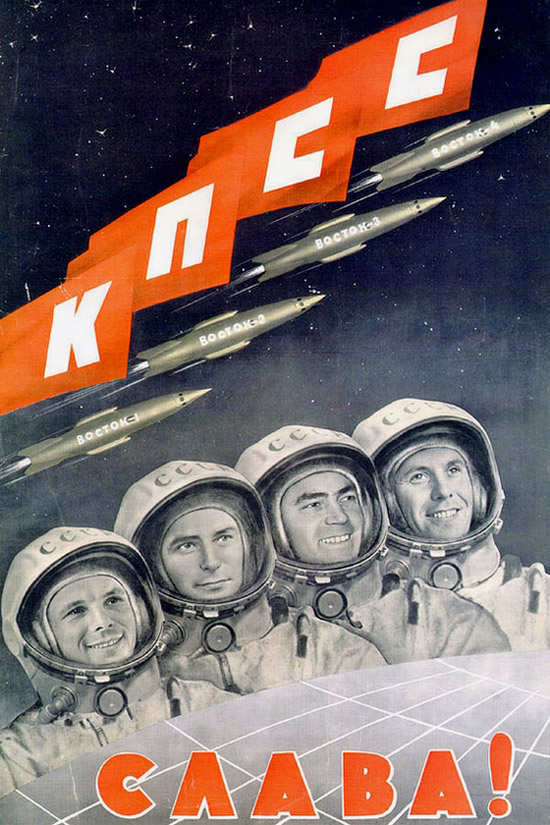 All of these were strategies NASA utilized, and then some. In addition to planting a U.S. flag on the moon, they delivered the first color image of Earth from space. On the ground, they enlisted artists like Andy Warhol, Norman Rockwell, and Laurie Anderson and actors like Star Trek‘s Nichelle Nichols to sell the program.

Recently, NASA has seemed to be in a reflective mood, from its antiquarian preparations for the 50th anniversary of the moon landing to its ad campaign of retro posters that resemble not only vintage sci-fi book jackets and movie ads, but also the futuristic social realism of their former Soviet rivals.

There’s almost something of an admission in NASA’s retro posters: we may have won the “space race,” but it wasn’t winner take all. There were some things the Soviets just did better—and when it came to making space travel look like the most monumentally heroic and exciting thing ever, they excelled, as you can see in this early collection of Soviet space posters from 1958-1963. 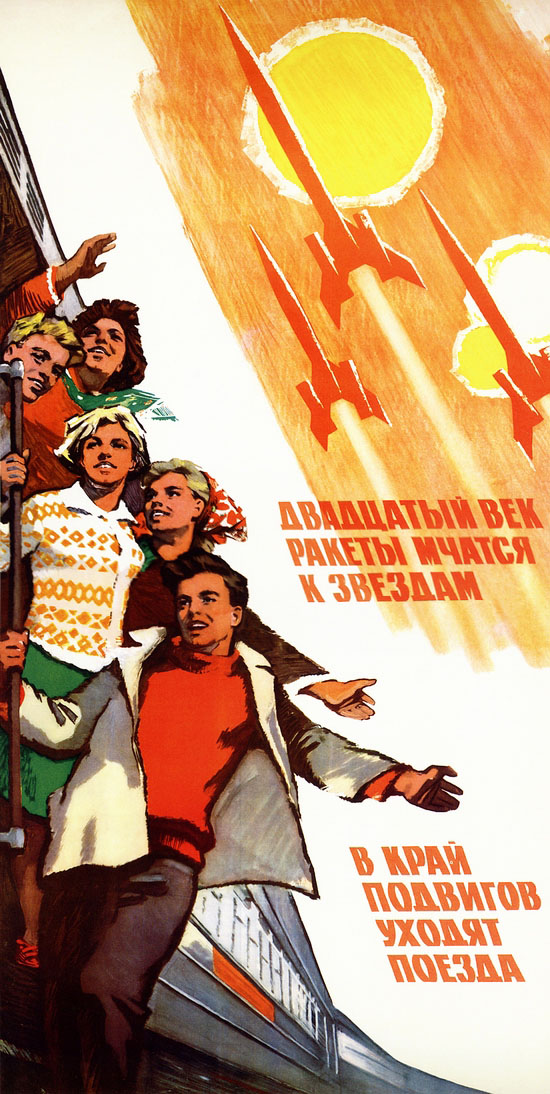 There’s something for, well, not everyone, but for men, women, young, old, young adults. Sci-fi geeks and model builders, people celebrating the new year, children celebrating the new year, a gaggle of young students who somehow all look just like Mary Tyler Moore. The artists are not celebrities, they’re fellow workers who “foresaw a Utopia in space,” writes Flashbak.

The Communists would bring peace and prosperity not only to the people of Earth but also to the technology-enabled, God-free Great Beyond. The artists created Soviet Space posters, vivid, energising and inspiring visions of the rosy-fingered dawn of tomorrow. They’re terrific.

They’re maybe even more terrific when we consider that ordinary citizens didn’t have much say, at all, in the funding and direction of the U.S.S.R.’s space program. (Whether American citizens did is another question.) It was important that Soviets know, however, that “We will open the distant worlds!” as one poster reads, and, as the sixties teenage cigarette ad on a train above proclaims, “In the 20th century, the rockets race to the stars, the trains are going to the lands of achievements!” 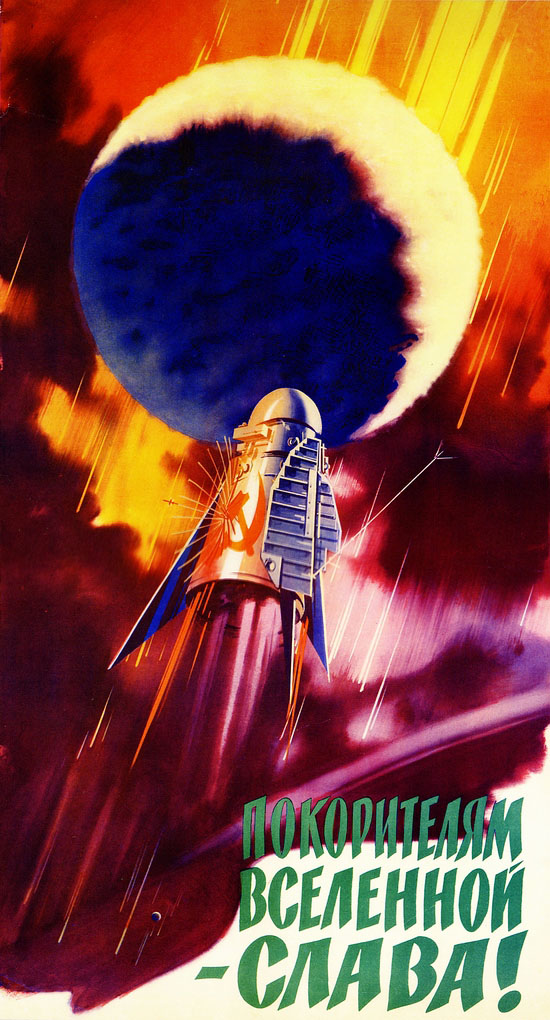 The number of posters here is but a smattering of those posted on All about Russia (here and here) and Flashbak. Each poster has its own enchanting quality: emulating the propaganda of the 1930s; turning industrial laborers into anonymous towering heroes; and reaching some very heavy metal heights of bombast, as in the ad above, which declares, “Glory to the conquerors of the universe!” 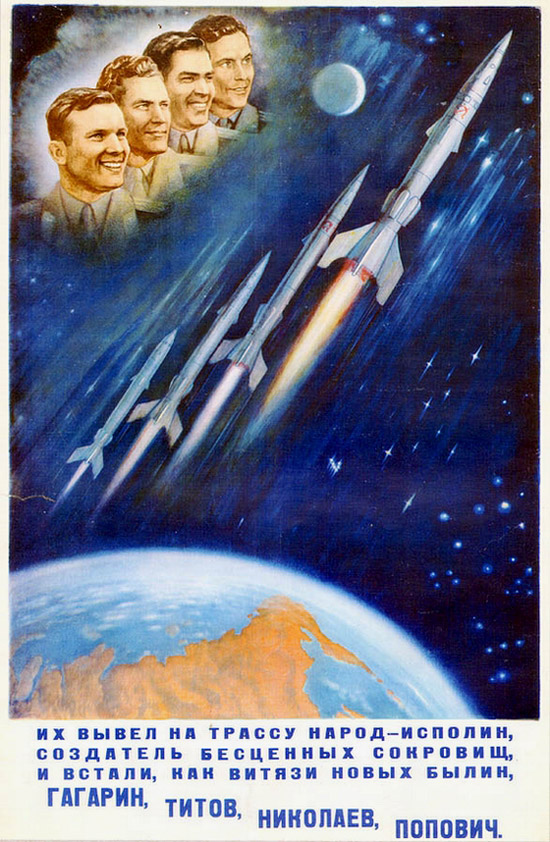 One poster superimposes the beaming faces of four cosmonauts, lined up like Kraftwerk, over a scene of four rockets leaving the earth. “Gagarin, Titov, Nikolaev, Popoviich—the mighty knights of our days.” (I’m not sure how that pun works in Russian.) The Soviets could also proclaim “Glory to the first woman cosmonaut!,” Valentina Tereshkova, who became the first woman to fly in space in 1963. 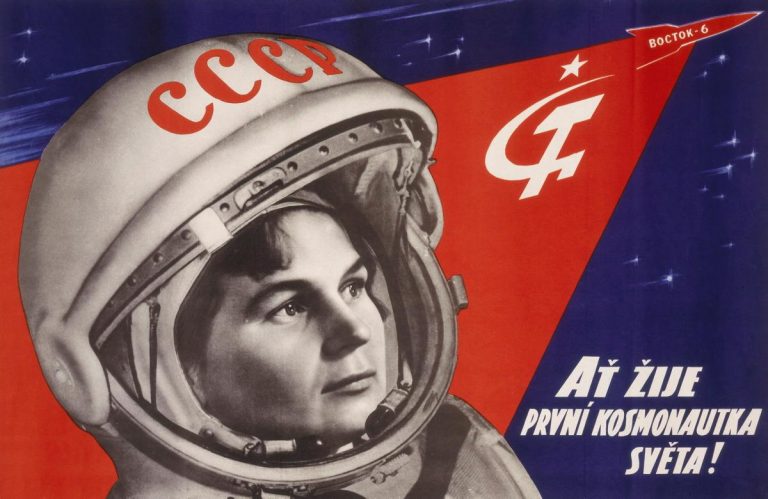 The Soviet space program deserves plenty of recognition for its many historic firsts, and also for the wildly enthusiastic optimism of its ad campaigns. They sold grand ideas about the exploration and, yes, conquest of space (and “the universe”) with the same verve and populist appeal as U.S. companies sold cars, cigarettes, and washing machines. Glory to the unsung Mad Men of the Soviet space poster! 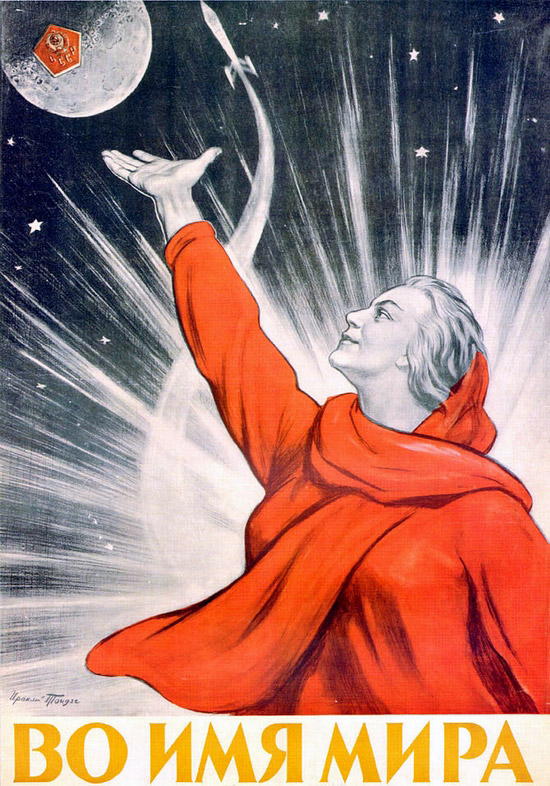 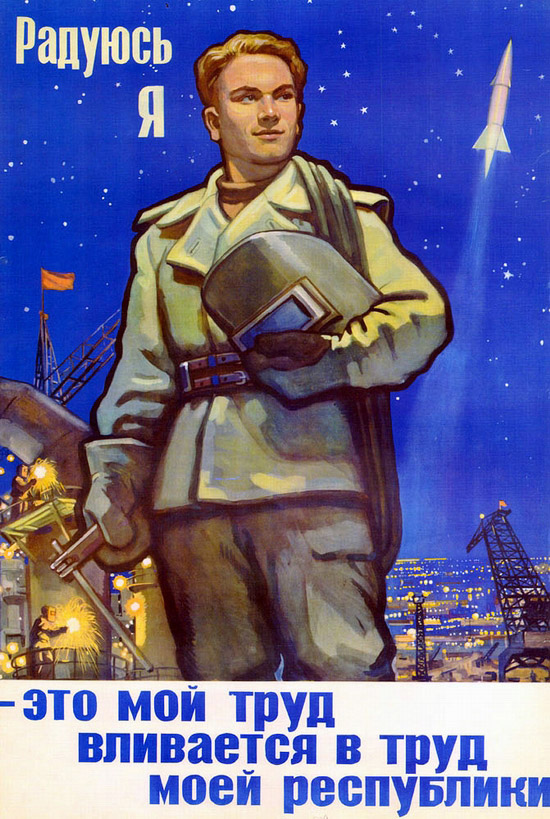 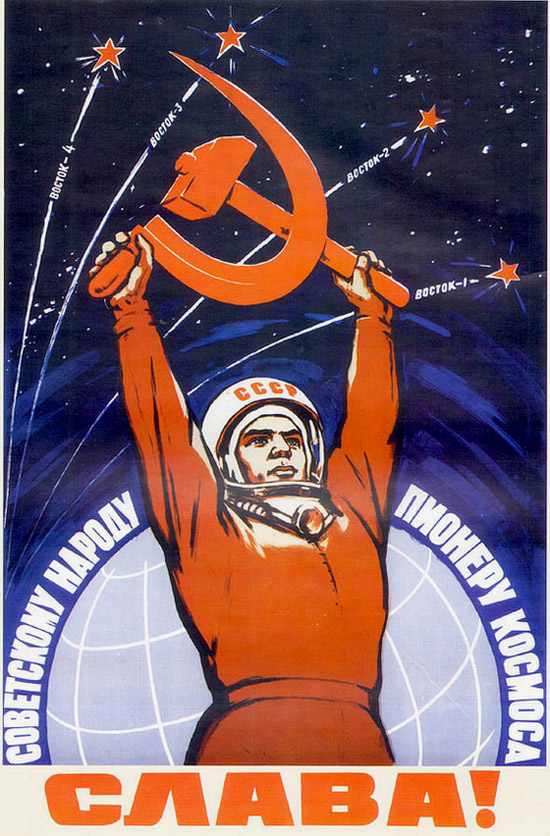 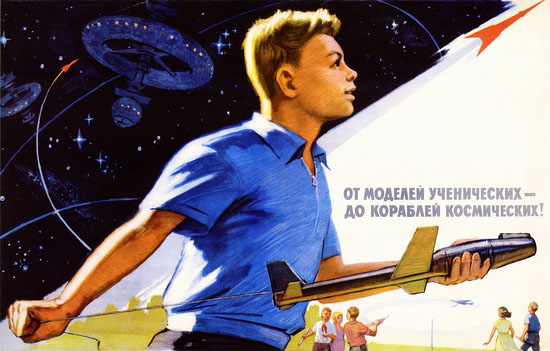