The 1926 Silent Film The Flying Ace Tells the Alternative Universe Story of a Black Fighter Pilot, Many Years Before African-Americans Were Allowed to Serve as Pilots in the US Army

The origin of dramatic storytelling in cinema is often traced to a single movie, D.W. Griffith’s The Birth of a Nation. It also happens to be a film that celebrates the racist violence of the Ku Klux Klan, based on a novel, The Clansman, that does the same. The film’s technical achievements and its racism became integral to Hollywood thereafter. Only relatively recently have black filmmakers begun entering the mainstream with very different kinds of stories, winning major awards and making record profits.

This would have been unthinkable in the 1920s, a period of intense racial violence when black WWI veterans came home to find their country armed against them. “When the soldiers returned,” writes Megan Pugh for the San Francisco Silent Film Festival, “Jim Crow still reigned supreme and lynch mobs continued to terrorize the South.” Hollywood placated white audiences by only ever featuring black characters in subservient, stereotypical roles, or casting white actors in blackface.

Against these oppressive representations, black filmmakers like Oscar Micheaux and George and Noble Jackson “used cinema to confront American racism,” responding to Griffith with films like Micheaux’s Within Our Gates and the Jacksons’ uplifting The Realization of a Negro’s Ambition. There were also several white filmmakers who made so-called “race movies.” But most of their films avoid any explicit political commentary.

These include the films of Richard Norman, who between 1920 and 1928 made seven feature-length silent movies with all-black casts, “geared toward black audiences.” He made romances, comedies, and adventure films, casting black actors in serious, “dignified” roles. “Instead of tackling discrimination head-on in his films,” writes Pugh, “Norman created a kind of world where whites—and consequently racism—didn’t even exist.” 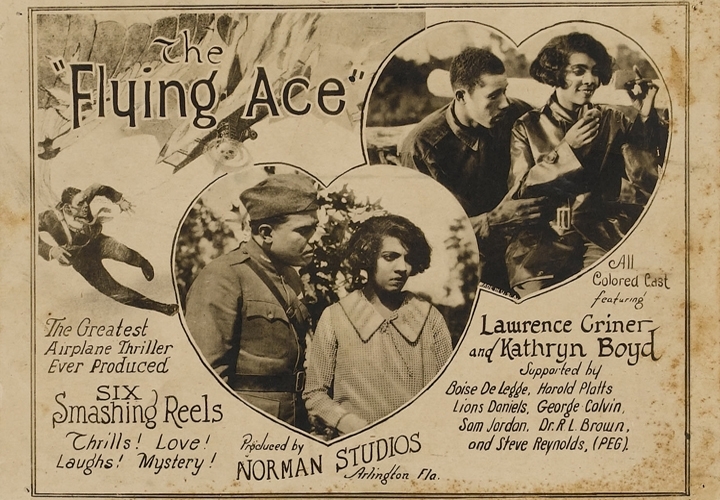 Though we may see this as a cynical commercial decision, and its own kind of appeasement to segregation, the approach also enabled Norman to tell powerful, alternate-universe stories that a more realist bent would not allow. 1926’s The Flying Ace, for example, Norman’s only surviving film, is about a black fighter pilot returning home to “resume his civilian career as a railroad detective—without removing his Army Air Service uniform, a constant reminder of his patriotism and valor.”

Norman tells the moving story of Captain Billy Stokes (see Part 1 at the top), “a model for the ideals of racial uplift,” despite the fact that “African-Americans were not allowed to serve as pilots in the United States Armed Forces until 1940.” One might say that rewriting recent history as wish-fulfillment has always been a function of cinema since… well, at least since The Birth of a Nation, if not further back to The Great Train Robbery.

Norman takes this impulse and dramatizes the life of an impossibly heroic black WWI serviceman, at a time when such men faced widespread abuse and discrimination in reality. While he insisted that he only made genre films, and avoided what he called the “propaganda nature” of Micheaux’s films, it’s hard not to read The Flying Ace as a political statement of its own, and not only for its oblique topical commentary.

The film centers on positive, complex black characters at a time when studios made quite a bit of money doing exactly the opposite. Norman gave black audiences heroes of their own to root for. In The Flying Ace, Captain Stokes not only returns from flying dangerous missions for his country, but he then goes on to capture a band of thieves who stole his employer’s payroll. The character “never would have made it onscreen in a Hollywood movie of the time.”

Norman established his studio in Jacksonville Florida, at the time considered “the Winter Film Capital of the World.” Many major studios decamped there from New York until WWI, when they moved west to L.A. Norman, who grew up in Middleburg, Florida, made a fortune inventing soft drinks before turning to movies. He returned to his home state to find little competition left in Jacksonville in the 1920s.

His studio would become “one of the three leading producers of race films in America,” next to the Micheaux Film Corporation and the Jacksons’ Lincoln Motion Picture Company. In 2016, Norman Studios was designated a National Historic Landmark. The filmmaker’s son, Richard Norman Jr. became a pilot, inspired by The Flying Ace, and has plans to turn the building into a museum celebrating Jacksonville’s, and Norman’s, cinema legacy.