When IBM Created a Typewriter to Record Dance Movements (1973) 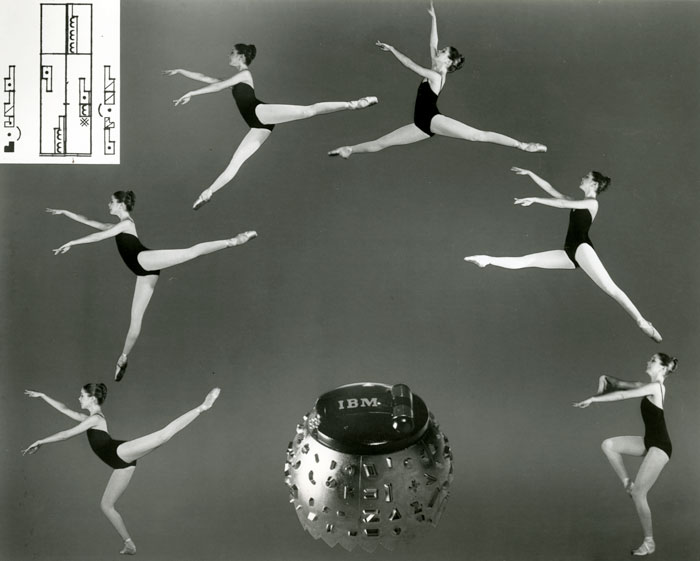 Increasingly many of us in the 21st century have never used a typewriter — indeed, have never seen one in real life. But despite being deep into its obsolescence, the machine has a long cultural half-life. Seeing typewriters in classic and period films, for example, keeps an idea of their look and feel in our minds. Naturally it gets entangled with the romance of the writer, or rather the Writer, whom we imagine pounding away on a culturally iconic model: an Underwood, an Olvetti. “If Olivettis could talk, you’d get the novelist naked,” writes Philip Roth in The Anatomy Lesson. From the then-new electric IBM typewriters, however, you’d hear “only the smug, puritanical workmanlike hum telling of itself and all its virtues: I am a Correcting Selectric II. I never do anything wrong.”

Yet we underestimate the influence of the IBM Selectric, on not just writing but late-20th-century American life in general, at our peril. Introduced in 1961, this technologically revolutionary typewriter replaced the old “typebars” — those thin metal arms that whack a letter onto the page with each keystroke — with a “typeball,” a “compact unit containing all the letters and symbols of a keyboard, rotated and pivoted to the correct position before striking.”

So writes IBM’s Justine Jablonska in an essay on the versatility of the typeball, which could be swapped out and modified according to the needs of the user. In 1973, IBM could say even to those users who needed to type out not words, sentences, and paragraphs but dances that, yes, there’s a typeball for that.

Developed in collaboration with New York City’s Dance Notation Bureau, this unusual typeball “had special Labanotation symbols, developed in the 1920s by Hungarian dancer/choreographer Rudolf Laban to analyze and record movement and dance.” Each symbol’s location “showed which part of the body — arm, leg, torso — was to be used. The symbol’s shape indicated direction. The symbol’s shading showed the level of an arm or leg. And its length controlled the time value of a movement.” In total, writes Karen Hill at Zippy Facts, Labanotation had “88 different symbols, which could be arranged to form a complete vocabulary for recording movement of any kind, from ballet and modern to ethnic, even folk.” Beyond dance, the system could also record “movements in areas like sports, behavioral sciences, physical therapy, and even industrial operations.”

This particular typeball showcased the Selectric’s versatility, but some had higher hopes. In a 1975 paper, dance scholar Drid Williams compares its potential impact to that of “Gutenberg’s invention several centuries ago,” signaling that “the graphic linguistic sign can now be joined by its obvious counterpart, the printed human action sign.” But she also expresses regret that “‘the ball’ is being looked on by many as a mere practical aid to recording human movement and it is being associated with specialist fields like dance. As usual, concern with the syntagmata obscures the real issues of the paradigms.” Indeed. A more practical-minded assessment comes from Charles Ditchendorf, employed at the time at IBM’s Office Products Division. “To the best of my knowledge,” Jablonska quotes him as saying, I didn’t sell one.” But then, when has dance ever been enslaved to the market?