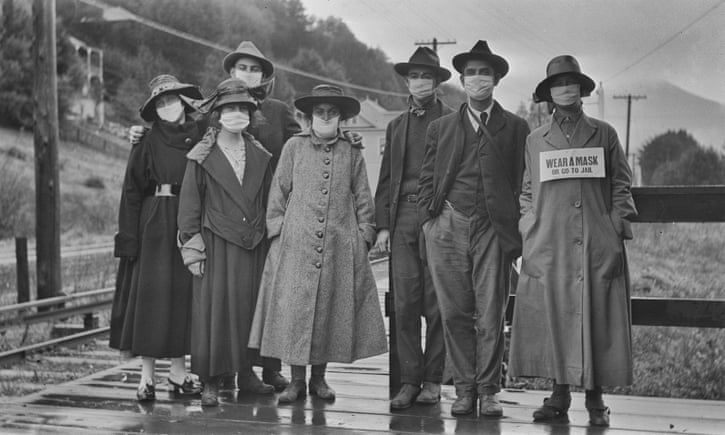 Medical professionals have had a particularly difficult time getting people in the United States to act in unison for the public good during the pandemic. This has been the case with every step that experts urge to curb the spread of COVID-19, from closing schools, churches, and other meeting places, to enforcing social distancing and wearing masks over the nose and mouth in public spaces.

The resistance may seem symptomatic of the contemporary political climate, but there is ample precedent for it during the spread of so-called Spanish Flu, which took the lives of 675,000 Americans a little over a hundred years ago. Even when forced to wear masks by law or face jail time, many Americans absolutely refused to do so.

“In 1918,” writes E. Thomas Ewing at Health Affairs, “US public health authorities recommended masks for doctors, nurses, and anyone taking care of influenza patients.” The advisory “gradually and inconsistently” spread to the general public, in a different cultural climate, in some important respects, than our own, as University of Michigan medical historian J. Alexander Navarro explains.

Nationwide, posters presented mask-wearing as a civic duty – social responsibility had been embedded into the social fabric by a massive wartime federal propaganda campaign launched in early 1917 when the U.S. entered the Great War. San Francisco Mayor James Rolph announced that “conscience, patriotism and self-protection demand immediate and rigid compliance” with mask wearing. In nearby Oakland, Mayor John Davie stated that “it is sensible and patriotic, no matter what our personal beliefs may be, to safeguard our fellow citizens by joining in this practice” of wearing a mask.

Despite the civic spirit and generalized public support for mask wearing, passing local mask ordinances was “frequently a contentious affair.” Debates that sound familiar raged in city councils in Los Angeles and Portland, both of which rejected mask orders. (One official declaring them “autocratic and unconstitutional.”) San Francisco, on the other hand, brought the police down on anyone who refused to wear a mask, imposing fines and jail time.

These measures were adopted by other cities, as well as abroad in Paris and Manchester. “Fines ranged,” Navarro writes, “from US$5 to $200,” a huge amount of money in 1918, and a good amount for many people out of work today. Even in cities that did not impose harsh penalties, “noncompliance and outright defiance quickly became a problem.” Much of the resistance to wearing masks, however, came later, after a first wave of flu infections subsided. When precautions were relaxed, cases rose once again, and new mask mandates went into effect in 1919.

San Francisco’s Anti-Mask League formed in protest, attracting somewhere between 4,000 and 5,000 unmasked attendees to a January meeting. Some of their objections rested on an early study that found scant evidence for the efficacy of compulsory mask-wearing. However, a later comprehensive 1921 study by Warren T. Vaughn, notes Ewing, found that the data was too sketchy to draw conclusions: “The problem was human behavior: Masks were used until they were filthy, worn in ways that offered little or no protection, and compulsory laws did not overcome the ‘failure of cooperation on the part of the public.’”

Vaughn concluded, “It is safe to say that the face mask as used was a failure.” Many behaviors contributed to this outcome. As we see in the photograph at the top of anonymous Californians wearing masks and holding a sign that reads, “Wear a mask or go to jail,” many did not wear masks properly, leaving their nose exposed, for example, like the woman in the center of the group. Notably, instead of social distancing, the group stands shoulder to shoulder, rendering their masks mostly ineffective.

The kind of masks most people wore were made of thin gauze. (“Obey the laws and wear the gauze. Protect your jaws from septic paws,” went a jingle at the time.) The material wasn’t at all effective at closer distances, where today’s quilted cotton masks, on the other hand, have been shown to stop the virus a few inches from the wearer’s face. Still, masks, when combined with other measures, were shown to be effective when compliance was high, though much of the evidence is anecdotal.

What can we learn from this history? Does it undermine the case for masks today? “We need to learn the right lessons from the failure of flu masks in 1918,” Ewing argues. The overwhelming scientific consensus is that masks are some of the most effective tools for slowing the spread of the coronavirus, and that, unlike in 1918, “Masks can work if we wear them correctly, modify behavior appropriately, and apply all available tools to control the spread of infectious disease.”