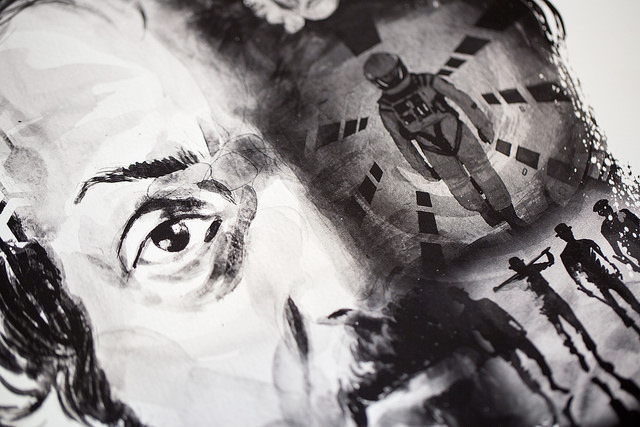 1968. Revolution was in the air and the future seemed bright. That year, Stanley Kubrick released his masterpiece 2001: A Space Odyssey – a big-budget, experimental rumination on the evolution of mankind. The film was a huge box office hit when it came out; its mind-bending metaphysics resonated with the culture’s newfound interest in chemically altered states and in spirituality.

In the September issue from that year, Playboy magazine published a lengthy interview with Kubrick. Even at a time when public figures were supposed to sound like intellectuals (boy, times have changed), Kubrick comes across as insanely well read. During the course of the interview, he quotes from the likes of media critic Marshall McLuhan, Winston Churchill, and 19th Century poet Matthew Arnold along with a handful of prominent academics.

Kubrick is characteristically cagey about offering any explanations of his enigmatic movie but he does readily expound on philosophical questions about God, the meaning of life (or lack thereof) and the possibility of extraterrestrial life. But perhaps the most interesting part of the 17-page interview is his vision of what 2001 might look like. It’s fascinating to see what he got right, what might be right a bit further into the future, and what’s completely wrong. Check them out below:

“Within ten years, in fact, I believe that freezing of the dead will be a major industry in the United States and throughout the world; I would recommend it as a field of investment for imaginative speculators.”

“Perhaps the greatest breakthrough we may have made by 2001 is the possibility that man may be able to eliminate old age.”

“I’m sure we’ll have sophisticated 3-D holographic television and films, and it’s possible that completely new forms of entertainment and education will be devised.”

“You might have a machine that taps the brain and ushers you into a vivid dream experience in which you are the protagonist in a romance or an adventure. On a more serious level, a similar machine could directly program you with knowledge: in this way, you might, for example, easily be able to learn fluent German in 20 minutes.”

“I believe by 2001 we will have devised chemicals with no adverse physical, mental or genetic results that can give wings to the mind and enlarge perception beyond its present evolutionary capacities…there should be fascinating drugs available by 2001; what use we make of them will be the crucial question.”

“The so-called sexual revolution, mid-wifed by the pill, will be extended. Through drugs, or perhaps via the sharpening or even mechanical amplification of latent ESP functions, it may be possible for each partner to simultaneously experience the sensations of the other; or we may eventually emerge into polymorphous sexual beings, with male and female components blurring, merging and interchanging. The potentialities for exploring new areas of sexual experience are virtually boundless.”

“Looking into the distant future, I suppose it’s not inconceivable that a semisentient robot-computer subculture could evolve that might one day decide it no longer needed man.”

For such a famously pessimistic filmmaker, Kubrick’s vision of the future is remarkably groovy – lots of sex, drugs and holographic television. He wasn’t, of course, the only one out there who thought about the future. You can see more bold predictions below:

Note: Note: An earlier version of this post appeared on our site in November 2014.