When Samuel Beckett Drove Young André the Giant to School: A True Story

Are your idle moments spent inventing imaginary conversations between strange bedfellows? The sort of conversation that might transpire in a pickup truck belonging to Samuel Beckett, say, were the Irish playwright to chauffeur the child André Rene Roussimoff—aka pro wrestler André the Giant—to school?

Too silly, you say? Nonsense. This isn’t some wackadoo random pairing, but an actual historic meeting of the minds, as André’s Princess Bride co-star and soon-to-be-published film historian, Cary Elwes, attests above.

In 1958, when 12-year-old André’s acromegaly prevented him from taking the school bus, the author of Waiting for Godot, whom he knew as his dad’s card buddy and neighbor in rural Moulien, France, volunteered for transport duty. It was a standing gig, with no other passengers. André recalled that they mostly talked about cricket, but surely they discussed other topics, too, right? Right!?

Even if they didn’t, it’s deliciously fun to speculate.

In the  barebones entry above, Binghamton, New York’s Därkhorse Drämatists playwright Ron Burch has Beckett dispensing romantic advice in much the same way that he wrote dialogue, to create a dialectic.  (“So I should embrace the negation of the act in order to get the opposite reaction?” André asks, re: a girl he’s eager to kiss.)

Burch is not the only dramatist to tackle these mystery rides. Chicago playwright Rory Jobst was inspired to write Samuel Beckett, Andre the Giant, and the Crickets after listening to They Might Be Giants’ John Flansburgh and John Linnell participating in a 3-question André the Giant trivia quiz on NPR’s Wait Wait…Don’t Tell Me. 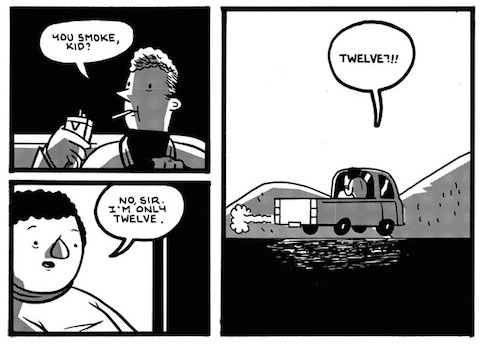 Cartoonist Box Brown is another to take a stab at the unlikely carpool buddies’ chit chat (above), with his graphic biography, Andre the Giant. In his version, Beckett asks André why he’s so big, André asks Beckett if he plays football, and Beckett gives him his first cigarette. (“Well, y’know, they stunt your growth so,” Beckett hesitates, “…eh, okay.”)

Ayun Halliday is interested in hearing about unorthodox productions of Waiting for Godot @AyunHalliday.