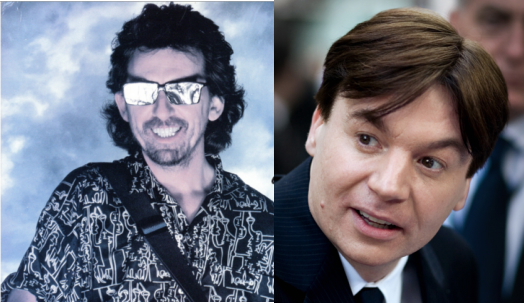 In a band full of extroverted goofballs and pranksters, George Harrison was the quiet one, the serious Beatle, the straight man and introspective mystic, right? Not so, according to Travelling Wilburys bandmate Tom Petty, who once countered the “quiet Beatle” sobriquet with “he never shut up. He was the best hang you could imagine.” Not so, according to Harrison himself, who once said “I think I’ve had an image, people have had a concept of me being really straight cause I was the serious one or something. I mean, I’m the biggest lunatic around. I’m completely comical, you know? I like craziness. I had to in order to be in the Beatles.”

It’s true that Harrison disliked fame and its trappings and dove deeply into life’s mysteries. In his final televised interview, he is contemplative and, yes, deeply serious. And while some of the stories of the end of his life are heartbreaking—like that of the oncologist who allegedly showed up unannounced at the dying Beatles’ door and cajoled him into signing an autograph when he could barely write his name—the story of the last letter he ever wrote made me smile.

According to Mike Myers, creator of Wayne’s World and the sixties spoof Austin Powers franchise, that letter arrived in his hands on the very day of Harrison’s death, delivered via private investigator as Myers and crew shot the third of the Powers films.

Harrison wrote but never mailed the short note a month before his death in November, 2001. In it, he reveals his love for Austin Powers, particularly the “Mini Me” character from The Spy Who Shagged Me (played by Verne Troyer)—a miniature clone of Powers’ nemesis Dr. Evil. In a GQ interview, Myers quotes from the letter: “…sitting here with my Dr. Evil doll…I just wanted to let you know I’ve been all over Europe for a mini-you doll.” Harrison also jokingly corrected Myers’ Liverpudlian: “Dr. Evil says frickin’ but any good Scouser dad will tell you it’s actually ‘friggin’ as in a ‘four of fish and finger pie,’ if you get my drift.”

The “Scouser dad” reference was particularly poignant for Myers, whose parents come from Liverpool. “You don’t know what The Beatles were in my house,” Myers told WENN news, “They were everything. Liverpool was poorish and it was rough and all of a sudden it was cool to come from this town, so my parents were eternally grateful.” Harrison returned the gratitude, writing “thanks for the movies, so much fun,” a sentiment Myers reacts to with “Dude, I can’t even.” And really, what could else could you say? “To get this letter,” and on the very day of Harrison’s passing no less, “was unbelievable,” said Myers, “It hits you and it can knock you off your feet.”

As for that reputation for seriousness? I don’t know about you, but from now on, when I think of the last days of George Harrison, I won’t think of his opportunistic doctor, or his turning down the OBE, or even that fateful final performance on VH1. I’ll imagine him sitting on the couch with a Dr. Evil doll, writing Mike Myers to request a Mini Me.