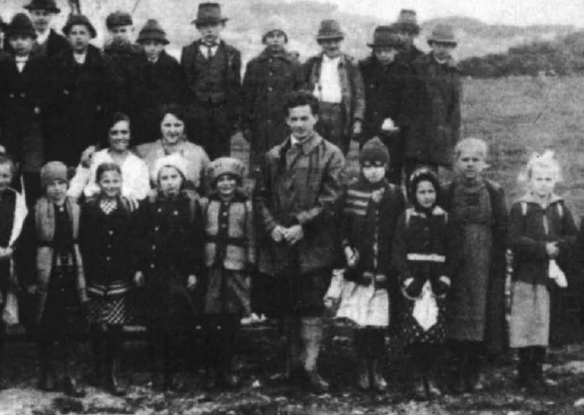 Ludwig Wittgenstein finished writing the Tractatus Logico-Philosophicus, the achievement for which most of us remember him, in 1918; three years later came its first publication in Germany. And to what problem did Wittgenstein put his luminous philosophical mind in the interim? Teaching a class of elementary schoolers in rural Austria. “Well on his way to being considered the greatest philosopher alive,” as Spencer Robins puts it in a thorough Paris Review post on Wittgenstein’s teaching stint, he also found himself “convinced he was a moral failure.” Searching for a solution, he got rid of his family fortune, left the “Palais Wittgenstein” in which he’d grown up, and out of “a romantic idea of what it would be like to work with peasants—an idea he’d gotten from reading Tolstoy,” went to teach kids in the middle of nowhere. See them all above.\

“I am to be an elementary-school teacher in a tiny village called Trattenbach,” Wittgenstein wrote to his own teacher and friend Bertrand Russell in a letter dated October 23, 1921. A month later, in another letter, he described his circumstances as those of “odiousness and baseness,” complaining that “I know human beings on the average are not worth much anywhere, but here they are much more good-for-nothing and irresponsible than elsewhere.” The great philosopher’s experiment in primary education would appear not to have gone well.

And yet Wittgenstein comes off, by many accounts, as an exemplary and almost unbelievably engaged teacher. He and his students, in Robins’ words, “designed steam engines and buildings together, and built models of them; dissected animals; examined things with a microscope Wittgenstein brought from Vienna; read literature; learned constellations lying under the night sky; and took trips to Vienna, where they stayed at a school run by his sister Hermine.” Hermine herself remembered the kids “positively climbing over each other in their eagerness” to answer their philosopher-teacher’s questions, and at least one particularly promising kid among them received Wittgenstein’s extensive extracurricular instruction — and even an offer of adoption.

We might also consider Wittgenstein a champion, in his own way, of equal treatment for the sexes: unlike other teachers in rural early 20th-century Austria, he expected the girls to solve the very same vertiginously difficult math problems he put to the boys. But by the same token, he doled out corporal punishment to them just as equally when they got the answer wrong, and even when they didn’t grasp the concepts at hand as swiftly as he might have liked. This rough treatment culminated in “the Haidbauer incident,” an occasion of child-smacking consequential enough in Wittgenstein’s life to merit its own Wikipedia page, and which effectively ended his educational involvement with youngsters. The incident reportedly left  an 11-year-old schoolboy “unconscious after being hit on the head during class.”

“Ultimately, he was to alienate the villagers of Trattenbach with his tyrannical and often bullying behavior, the result of a mind unable to empathize with the stage at which some of his pupils found themselves in their learning,” writes education blogger Alex Beard in his own post on Wittgenstein-as teacher. “Today we would admire his high expectations and the purity of his intention as an educator, but look rather less kindly on the Ohrfeige (ear-boxing) and Haareziehen (hair-pulling) that his students later recalled.” We modern-day Wittgenstein fans have to ask ourselves what wonders we might we have learned had fate assigned our elementary-school selves to his classroom — and whether we would have graduated to our next year unscathed.

Read more about Wittgenstein’s stint as a teacher at The Paris Review.

Wittgenstein and Hitler Attended the Same School in Austria, at the Same Time (1904)

See the Homes and Studies of Wittgenstein, Schopenhauer, Nietzsche & Other Philosophers