What Did Nietzsche Really Mean When He Wrote “God is Dead”? 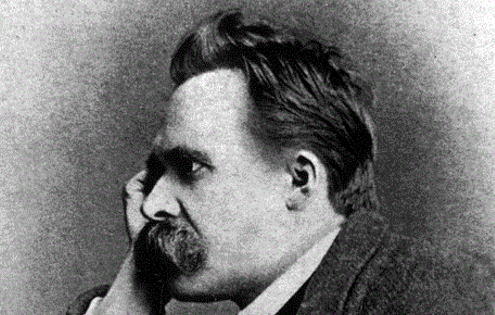 The quote inspired an anxious 1966 Time magazine cover, and a preachy 2016 movie franchise that works hard to inoculate the faithful against atheism’s threatening seductions: “God is Dead,” wrote Friedrich Nietzsche in his 1882 book of incisive aphorisms, The Gay Science, and unwittingly coined a phrase now inseparable from 20th century culture wars. Of course, Nietzsche knew he was tossing a Molotov cocktail into the fraught culture wars of his own time, but he didn’t blow things up for the sheer pleasure of it. Instead, his blunt assertion lay at the heart of what Nietzsche saw as both a tremendous problem and a necessary realization.

To clarify, Nietzsche never meant to say that there had been some sort of god but that he had died in recent history. “Rather,” writes Scotty Hendricks at Big Think, “that our idea of one had” been rendered a relic of a pre-scientific age. The philosopher, “an atheist for his adult life,” found no place for Christian belief in a post-Enlightenment world: “Europe no longer needed God as the source for all morality, value, or order in the universe; philosophy and science were capable of doing that for us.” Accepting this brute fact can impose a heavy existentialist burden, as well as a heavy philosophical and ethical one: theological thinking is deeply embedded in Western philosophy and language, or as Nietzsche wrote, “I am afraid we are not rid of God because we still have faith in grammar.”

A committed metaphysical naturalist, Nietzsche nonetheless saw that just as he was haunted by his strict religious upbringing, unable to easily rid himself of the traces of the Christian God, so too was European civilization haunted, particularly the bourgeois German society he often savaged. “God is dead; but given the way people are, there may still for millennia be caves in which they show his shadow.—And we—we must still defeat his shadow as well!” The “shadow” of god trails our ideas about morality. Fearing to give up religious thought, we cling to it even in the absence of religion. What is to take its place, we wonder, except for widespread, destructive nihilism, a condition Nietzsche feared inevitable?

Nietzsche even saw scientific discourse as haunted by ideas of divine agency. “Let us beware of saying that there are laws in nature,” he writes in The Gay Science, “There are only necessities: there is no one who commands, no one who obeys, no one who transgresses. Once you know that there are no purposes, you also know that there is no accident; for only against a world of purposes does the word ‘accident’ have a meaning.” Far from pulling away the source of human meaning, however, Nietzsche seeks to liberate his readers from the idea that “death is opposed to life”—or that losing a cherished belief is a catastrophe.

On the contrary—as philosopher Simon Critchley aptly paraphrases in a brief video at Big Think— Nietzsche  thought that belief in God made us “cringing, cowardly, submissive creatures,” and profoundly unfree. He believed we would continue to be so until we accepted our place in nature—no easy feat in an age so steeped in god-think. “When will we be done with our caution and care?” Nietzsche wondered, “When will all these shadows of god no longer darken us? When will we have completely de-deified nature? When will we begin to naturalize humanity with a pure, newly discovered, newly redeemed nature?”

For Nietzsche, the mass of people may never do so. He reserves his redemption for “the kind of people who alone matter; I mean the heroic.” Failing to become heroes, ordinary people in modernity are fated to go the way of “the Last Man,” a figure, writes Hendricks, “who lives a quiet life of comfort, without thought for individuality or personal growth.” A passive consumer. We can read Nietzsche’s philosophy as thoroughgoing elitism, or as a call to the reader to personal heroism. Either way, the anxiety he tapped into has persisted for 134 years, and shows little sign of abating for many people. For others, the nonexistence of a supreme being has no effect on their psychological health.

For billions of Daoists and Buddhists, for example, the problem has never existed. Nietzsche knew perhaps as much about Eastern religion as his contemporaries, much of his knowledge tainted by Arthur Schopenhauer’s pessimistic take on Buddhism. “Compared to [Schopenhauer’s] world view,” writes Peter Abelson, “which is very severe, Buddhism seems almost cheerful.” Nietzsche could be equally severe, often as a matter of polemic, often as matter of mood, sometimes dismissing other religious systems with only slightly less contempt than he did Christianity. But he sums up one of his key atheistic values in a supposed quote from the Buddha: “Don’t flatter your benefactors! Repeat this saying in a Christian church, and it will instantly clear the air of everything Christian.” To live without belief in god, he suggests over and over, is to be fully free from servitude, and fully responsible for oneself.

Nietzsche, Wittgenstein & Sartre Explained with Monty Python-Style Animations by The School of Life