How Aleister Crowley, the Infamous Occultist, Led the First Attempt to Reach the Summit of K2 (1902) 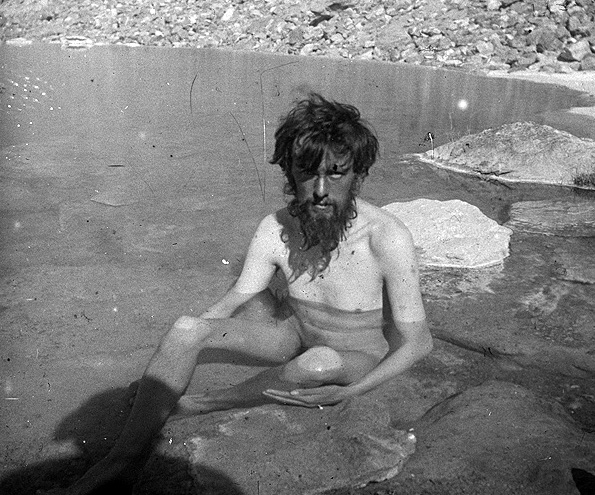 It sounds like the plot of a Werner Herzog film: Aleister Crowley, heir to a brewing fortune and “flamboyant, bisexual drug fiend with a fascination for the occult,” meets “son of a well-known Jewish Socialist” Oscar Eckenstein, “a chemist turned railway engineer.” The two strike up a friendship over their mutual passion for mountaineering, and, in four years time, co-lead an expedition to reach the summit of K2, the second highest mountain in the world.

The descriptions of these characters come from Mick Conefrey’s The Ghosts of K2: The Race for the Summit of the World’s Most Deadly Mountain, a book detailing the many grueling attempts, many deaths, and few successes, in over a century of climbs to the mountain’s peak. Crowley and Eckenstein’s expedition, undertaken in 1902, was the first. Though unsuccessful, their effort remains a legendary feat of historical bravery, or hubris, or insanity—an ascent up the face of what climber George Bell called “a savage mountain that tries to kill you.”

In an interview with National Geographic, Conefrey sums up the doomed expedition:

In those days, nobody had a clue about what it was going to be like. They thought they would go to the Himalayas and knock off K2 in a couple of days. But as the expedition proceeded, it started falling apart. Eckenstein, the leader, had a bad respiratory infection. Crowley had malaria and spent most of the time in his tent with a high fever. At one point he got so delirious, he started waving his revolver at other members of the team.

There are many other Herzogian touches. In his book Fallen Giants, Maurice Isserman describes the team—also consisting of a novice Englishman, a Swiss doctor, and two experienced Austrian climbers—as “unreasonably burdened by three tons of luggage.” Some of that unnecessary burden came from a “several-volume library” Crowley “intended to haul onto the glacier.” The others “objected to the superfluous weight, but Crowley had read enough Joseph Conrad to know what happened to those who let go of their hold on civilization in the wild.” The library stayed, and a train of 200 porters hauled the team’s luggage to Baltoro Glacier. (See Crowley in a photo from the expedition above, presumably stricken with malaria.)

Prior to setting off for K2 Eckenstein and Crowley had climbed volcanoes in Mexico, then the latter had traveled to San Francisco, Hawaii, Japan, Sri Lanka, and India—along the way having affairs, learning meditation, and developing a “lifelong devotion to Shiva, the Hindu god of destruction.” While it takes a certain rare personality to subject themselves to the rigors of scaling a mountain almost five miles high, Crowley—notorious for his “magick,” sexual adventures, drug use, lewd poetry, and founding of a religious order—is arguably the most out-there personality in the history of a very extreme sport.

But mountaineering “is not a normal pursuit,” writes Scottish climber Robin Campbell, “and we should not be too surprised to find its adepts showing odd behavior in other spheres of life.” Like all devotees of strenuous, death-defying pursuits, Crowley “wanted extreme experiences,” says Conefrey, “where he pushed himself to the limit.” It just so happened that he wanted to push far beyond the natural and human worlds. After the failed K2 attempt, he would only make one more daring expedition with Eckenstein, in 1905, a climb up the Himalayan mountain of Kangchenjunga, the third highest mountain in the world.

On the trip, Crowley, the leader, reportedly treated the local porters with brutal arrogance, and when three of them were killed along with one of the expedition members, he refused to help, writing to a Darjeeling newspaper, “a mountain ‘accident’ of this sort is one of the things for which I have no sympathy whatever.” He left the following day and gave up mountaineering, devoting the rest of his life to his occult interests and the exploits that earned him the tabloid reputation as “the wickedest man in the world.”

K2 was finally conquered by two Italian climbers in 1954, who reached the summit, frostbitten and half-mad, as Joanna Kavenna puts it in a review of Conefrey’s spellbinding book, “in a moment of sublime anticlimax.”