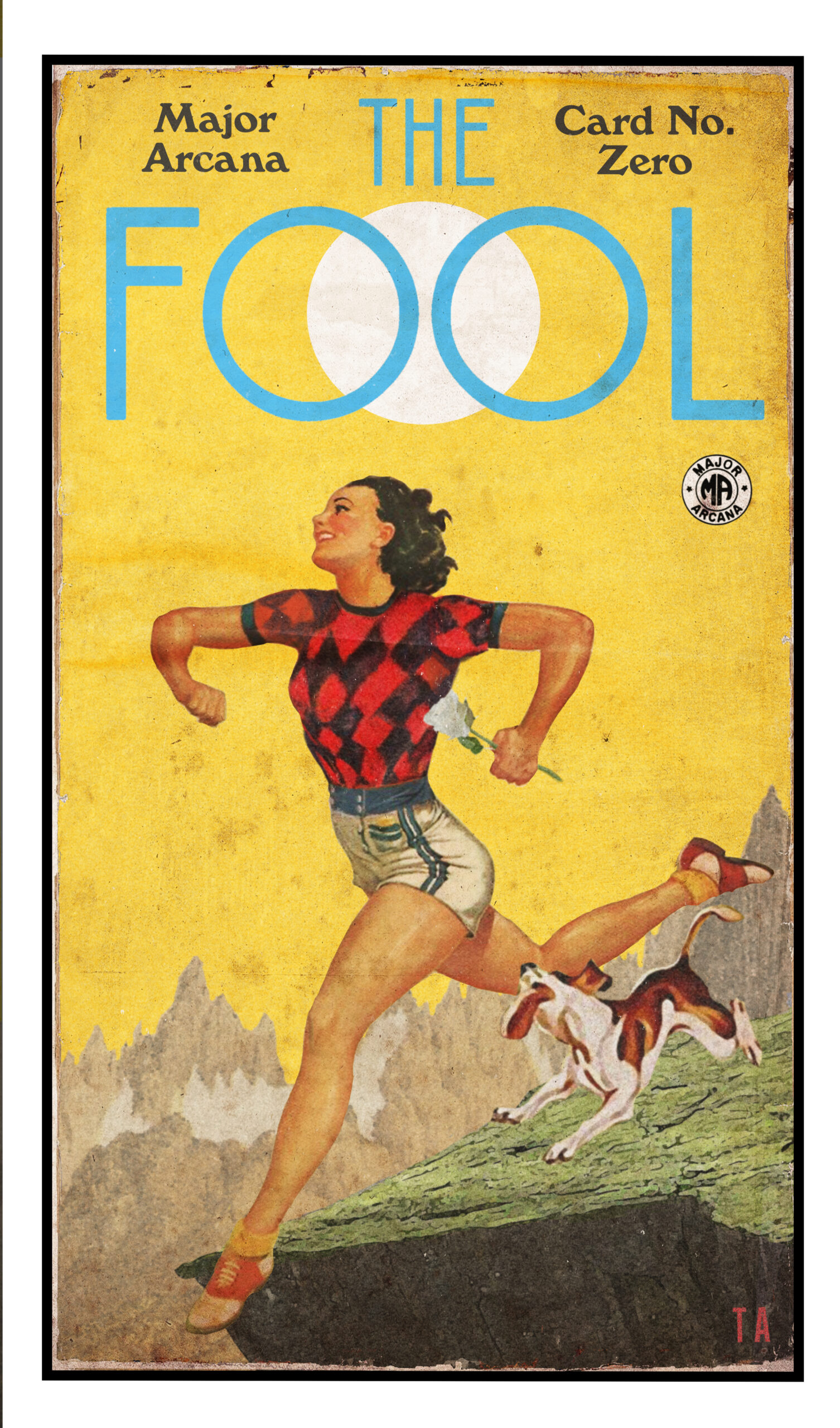 Although he’s dabbled in the abstractions that once graced the covers of psychology, philosophy, and science texts, his overarching attraction to the visual language of science fiction and illicit romance speak to the premium he places on narrative.

And with hundreds of “mid-century mashups” to his name, he’s become quite a master of bending existing narratives to his own purposes.

Recently, Alcott turned his attention to the creation of the Pulp Tarot deck he is funding on Kickstarter. 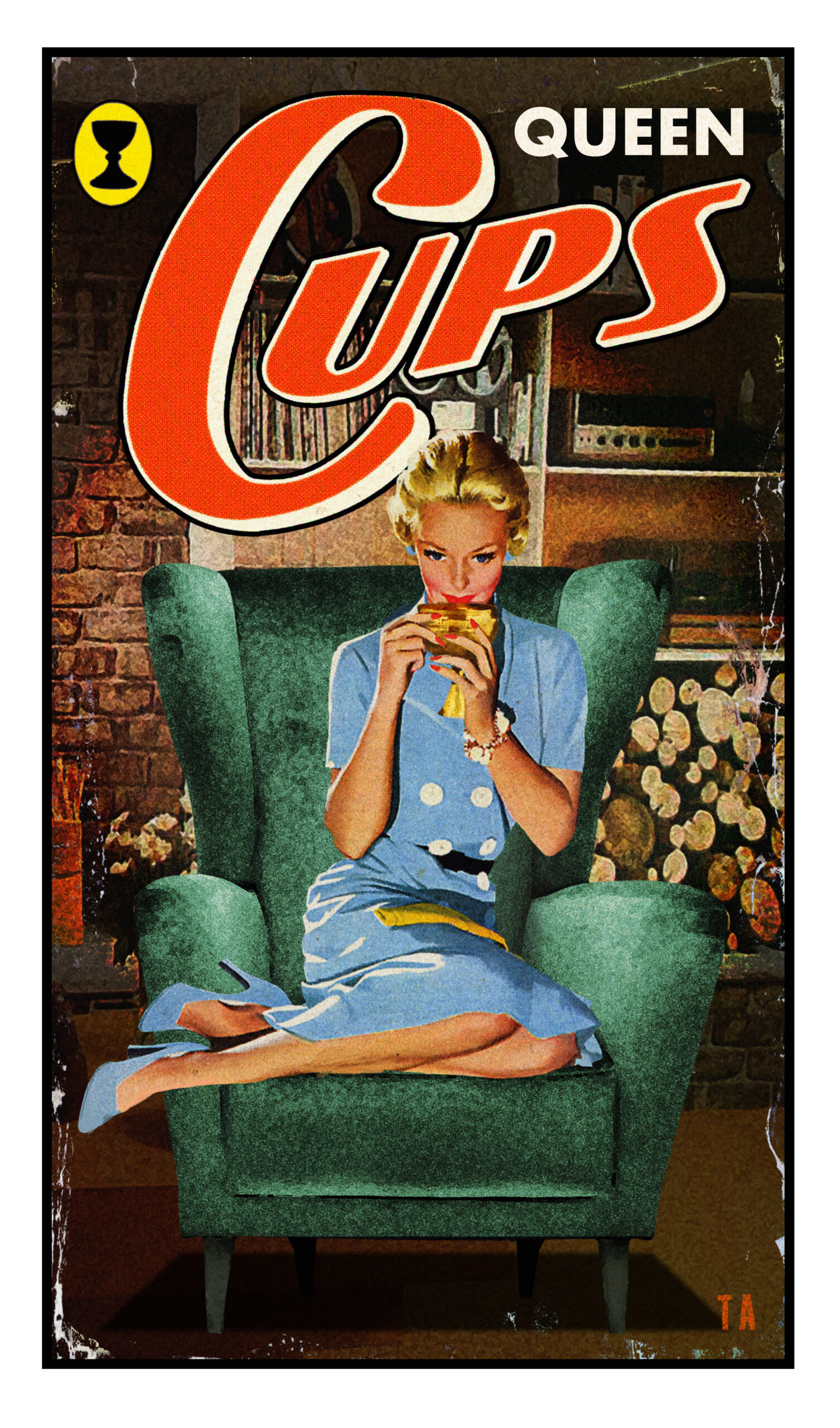 A self-described “clear-eyed skeptic as far as paranormal things” go, Alcott was drawn to the “simplicity and strangeness” of Pamela Colman Smith’s “bewitching” Tarot imagery:

Maybe because they were simply the first ones I saw, I don’t know, but there is something about the narrative thread that runs through them, the way they delineate the development of the soul, with all the choices and crises a soul encounters on its way to fulfillment, that really struck a chord with me. You lay out enough Tarot spreads and they eventually coalesce around a handful of cards that really seem to define you. I don’t know how it happens, but it does, every time: there are cards that come up for you so often that you think, “Yep, that’s me,” and then there are others that turn up so rarely that, when they do come up, you have to look them up in the little booklet because you’ve never seen them before. 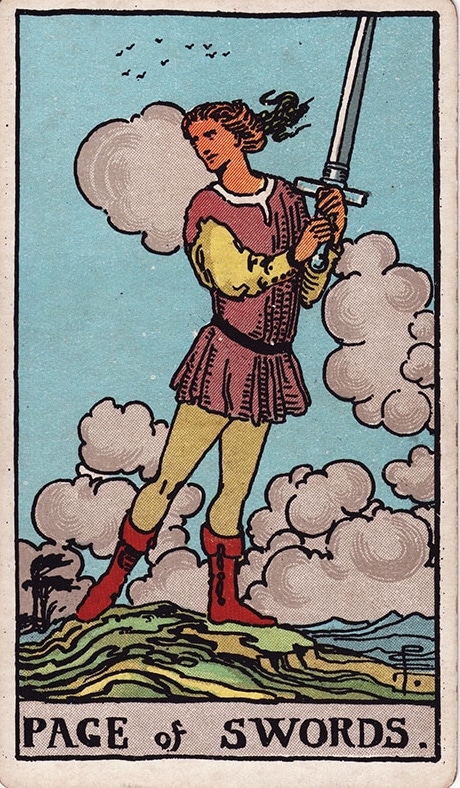 One such card for Alcott is the Page of Swords. In the early 90s, curious to know what the Tarot would have to say about the young woman he’d started dating, he shuffled and cut his Rider-Waite-Smith deck “until something inside said “now” and he flipped over the Page of Swords:

I looked it up in the booklet, which said that the Page of Swords was a secret-keeper, like a spy. I thought about that for a moment; the woman I was seeing was nothing like a spy, and had no spy-like attributes. I shrugged and began the process again, shuffling and cutting and shuffling and cutting, until, again, something inside said “now,” and turned up the card again. It was the Page of Swords, again. My heart leaped, I put the deck back in its box and quietly freaked out for a while. The next day, I asked the young lady if the Page of Swords meant anything to her, and she said “Oh sure, when I was a kid, that was my card.” Anyway, I’m now married to her. 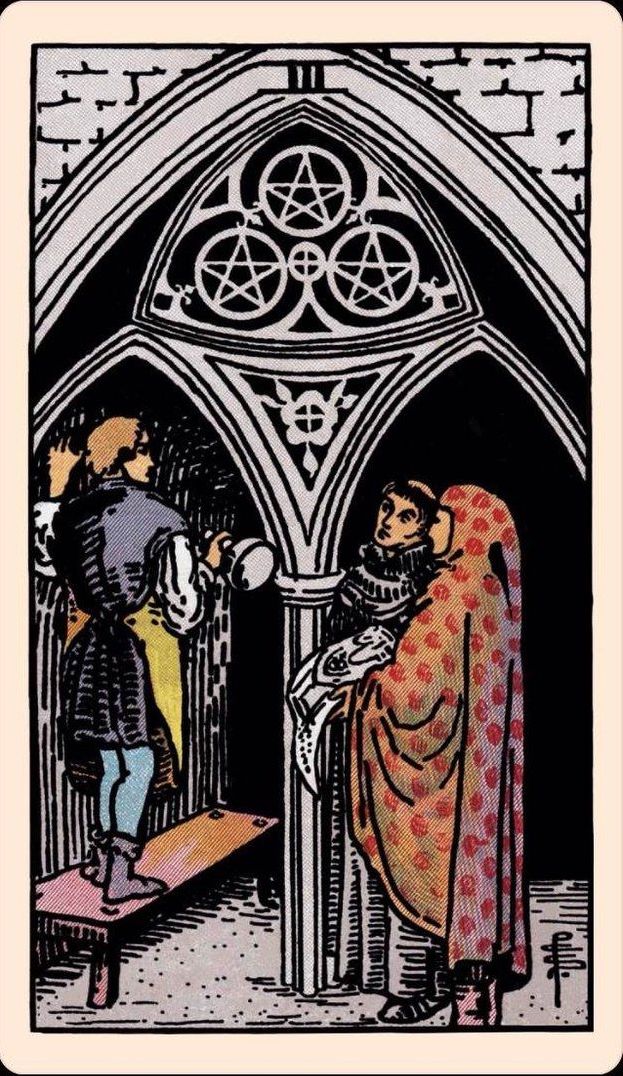 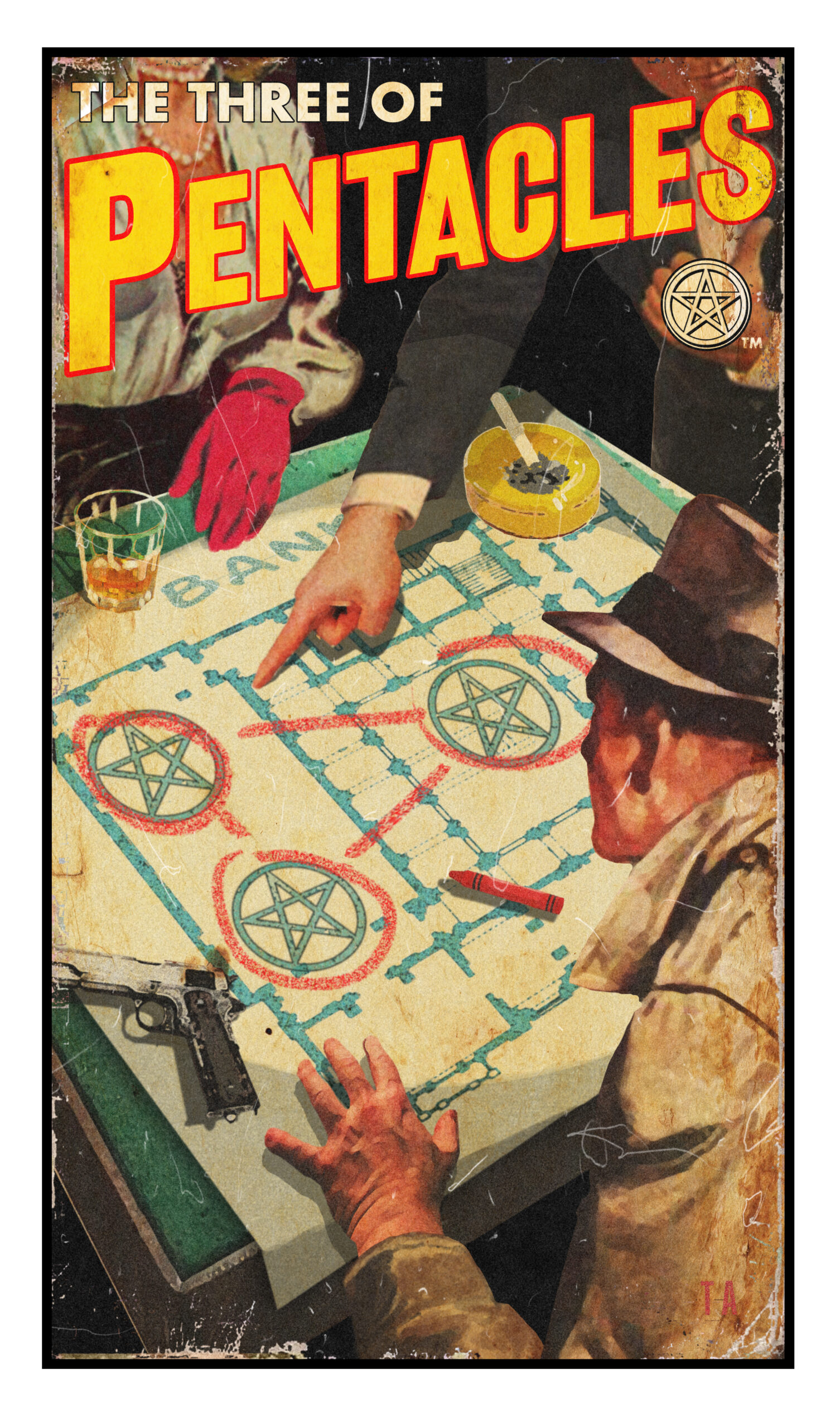 The Three of Pentacles is another favorite, one that presented a particular design challenge.

The Smith deck shows a stonemason, an architect and a church official, collaborating on building a cathedral. Now, there are no cathedrals in the pulp world, so I had to think, well, in the pulp world, pentacles represent money, so the obvious choice would be to show three criminals planning a heist. I couldn’t find an image anything close to the one in my head, so I had to build it: the room, the table, the map of the bank, the plan, the people involved, and then stitch it all together in Photoshop so it ended up looking like a cohesive illustration. That was a really joyful moment for me: there were the three conspirators, the Big Cheese, the Dame and The Goon, their roles clearly defined despite not seeing anyone’s face. It was a real breakthrough, seeing that I could put together a little narrative like that.

Smith imagined a medieval fantasy world when designing her Tarot deck. Alcott is drawing on 70 years of pop-culture ephemera to create a tribute to Smith’s vision that also works as a deck in their own right “with its own moral narrative universe, based on the attitudes and conventions of that world.” 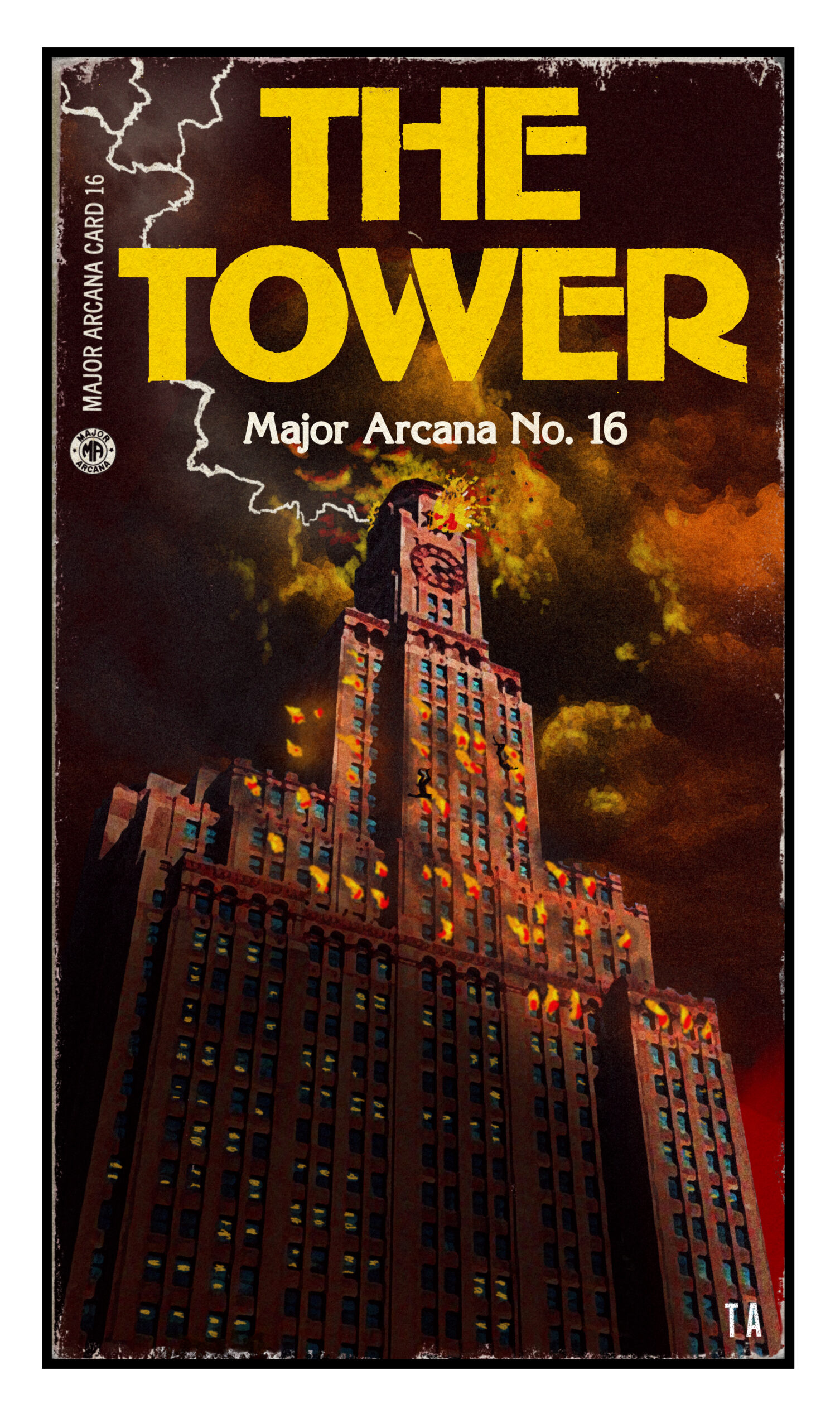 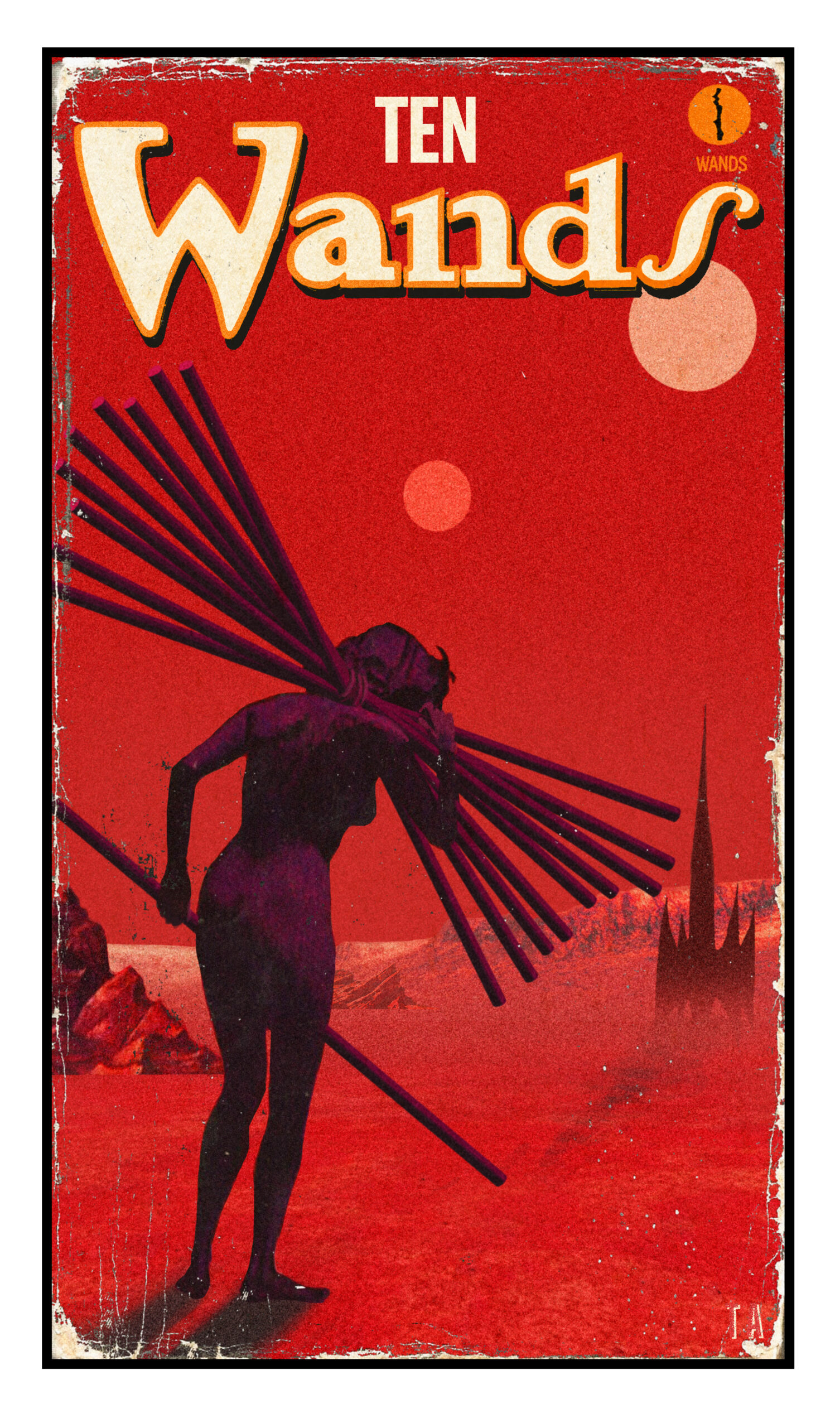 Before drafting each of his 70 cards, Alcott studied Smith’s version, researching its meaning and design as he contemplates how he might translate it into the pulp vernacular. He has found that some of Smith’s work was deliberately exacting with regard to color, attitude, and costume, and other instances where specific details took a back seat to mood and emotional impact:

Once I understand what a card is about, I look through my library to find images that help get that across. It can get really complicated! A lot of times, the character’s body is in the right position but their face has the wrong expression, so I have to find a face that fits what the card is trying to say. Or their physical attitude is right, but I need them to be gripping or throwing something, so I have to find hands and arms that I can graft on, Frankenstein style. In some cases, there will be figures in the cards cobbled together from five or six different sources. 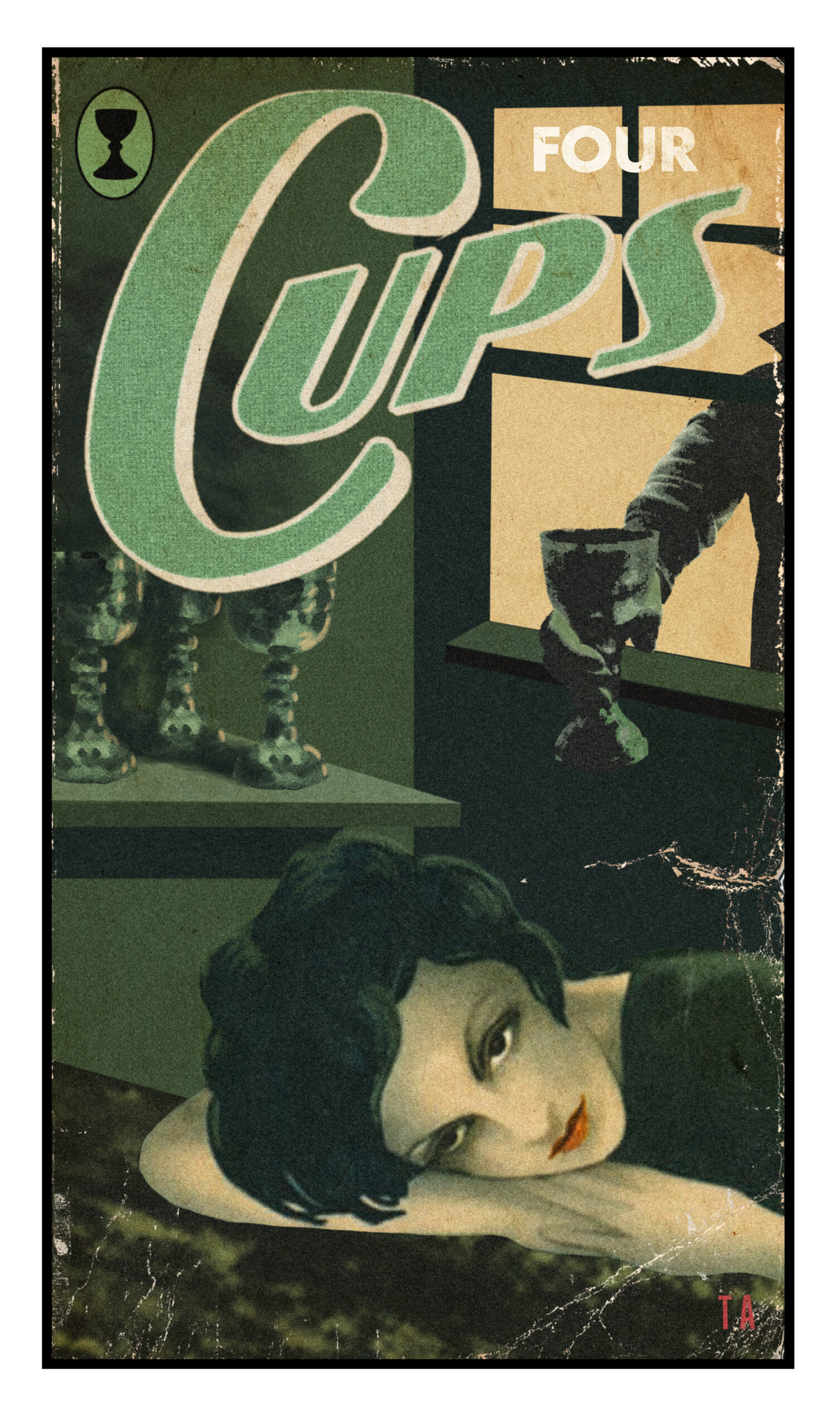 All images from the Pulp Tarot used with the permission of artist Todd Alcott.