Discover The Grammar of Ornament, One of the Great Color Books & Design Masterpieces of the 19th Century

In the mid-17th century, young Englishmen of means began to mark their coming of age with a “Grand Tour” across the Continent and even beyond. This allowed them to take in the elements of their civilizational heritage first-hand, especially the artifacts of classical antiquity and the Renaissance. After completing his architectural studies, a Londoner named Owen Jones embarked upon his own Grand Tour in 1832, rather late in the history of the tradition, but ideal timing for the research that inspired the project that would become his legacy. 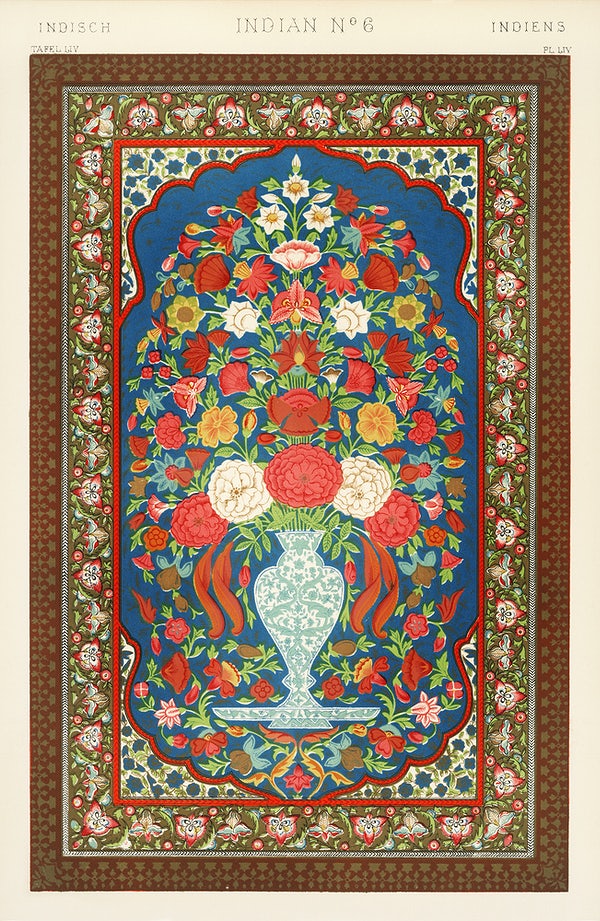 According to the Victoria and Albert Museum, Jones visited “Italy, Greece, Egypt and Turkey before arriving in Granada, in Spain to carry out studies of the Alhambra Palace that were to cement his reputation.”

He and French architect Jules Goury, “the first to study the Alhambra as a masterpiece of Islamic design,” produced “hundreds of drawings and plaster casts” of the historical, cultural, and aesthetic palimpsest of a building complex. The fruit of their labors was the book Plans, Elevations, Sections and Details of the Alhambra, “one of the most influential publications on Islamic architecture of all time.” 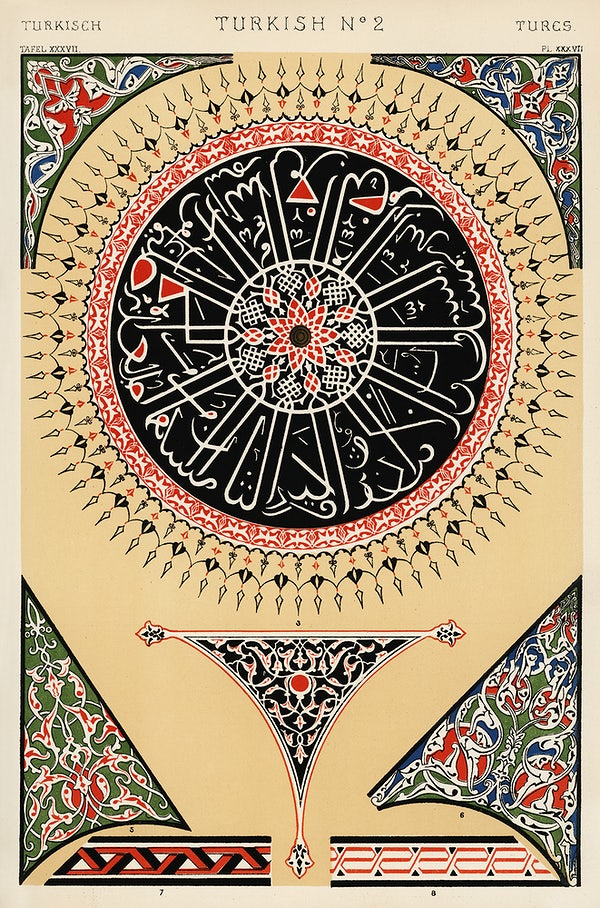 Published in the 1840s, the book pushed the printing technologies of the day to their limits. In search of a way to do justice to “the intricate and brightly colored decoration of the Alhambra Palace,” Jones had to put in more work researching “the then new technique of chromolithography — a method of producing multi-color prints using chemicals.” In the following decade, he would make even more ambitious use of chromolithography — and draw from a much wider swath of world culture — to create his printed magnum opus, The Grammar of Ornament.

With this book, Jones “set out to reacquaint his colleagues with the underlying principles that made art beautiful,” write Metropolitan Museum of Art curator Femke Speelberg and librarian Robyn Fleming. “Instead of writing an academic treatise on the subject, he chose to assemble a book of one hundred plates illustrating objects and patterns from around the world and across time, from which these principles could be distilled.” To accomplish this he drew on his own travel experiences as well as resources closer at hand, including “the museological and private collections that were available to him in England, and the objects that had been on display during the Universal Exhibitions held in London in 1851 and 1855.” 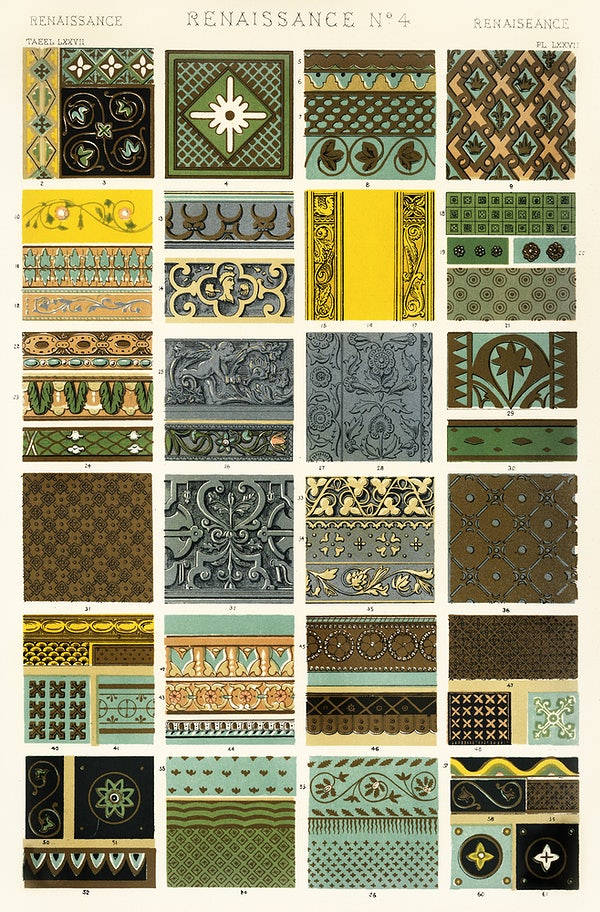 The Grammar of Ornament was published in 1856, emerging into a Britain “dominated by historical revivals such as Neoclassicism and the Gothic Revival,” says the V&A. “These design movements were riddled with religious and social connotations. Instead, Owen Jones sought a modern style with none of this cultural baggage. Setting out to identify the common principles behind the best examples of historical ornament, he formulated a design language that was suitable for the modern world, one which could be applied equally to wallpapers, textiles, furniture, metalwork and interiors.” 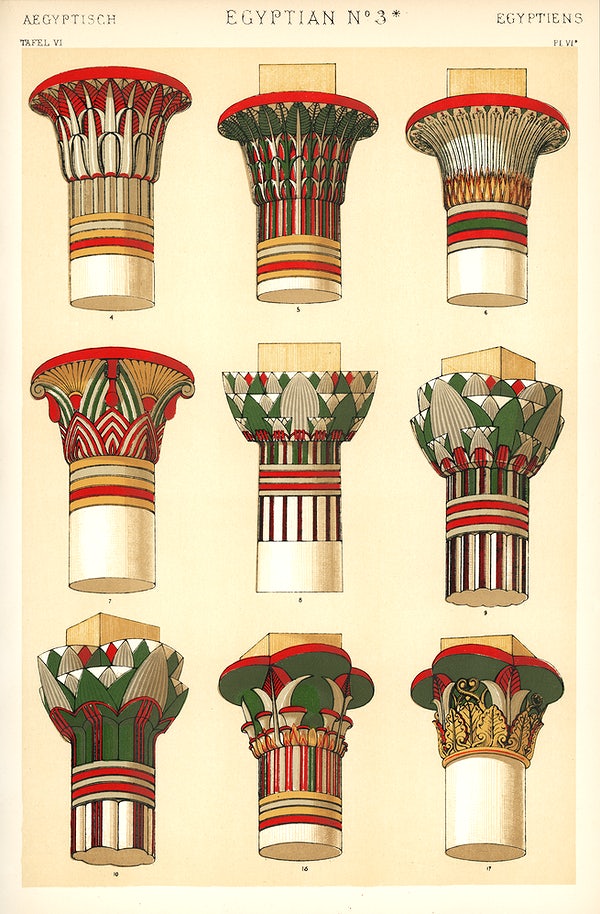 Indeed, the patterns so lavishly reproduced in the book soon became trends in real-world design. They weren’t always employed with the intellectual understanding Jones sought to instill, but since The Grammar of Ornament has never gone out of print (and can even be downloaded free from the Internet Archive), his principles remain available for all to learn — and his painstakingly artistic printing work remains available for all to admire — even in the corners of the world that lay beyond his imagination.

You can purchase a complete and unabridged color edition of The Grammar of Ornament online.

Every Page of Depero Futurista, the 1927 Futurist Masterpiece of Graphic Design & Bookmaking, Is Now Online