The Birth of Espresso: The Story Behind the Coffee Shots That Fuel Modern Life

Espresso is neither bean nor roast.

It is a method of pressurized coffee brewing that ensures speedy delivery, and it has birthed a whole culture.

Americans may be accustomed to camping out in cafes with their laptops for hours, but Italian coffee bars are fast-paced environments where customers buzz in for a quick pick me up, then right back out, no seat required.

It’s the sort of efficiency the Father of the Modern Advertising Poster, Leonetto Cappiello, alluded to in his famous 1922 image for the Victoria Arduino machine (below).

Let 21st-century coffee aficionados cultivate their Zenlike patience with slow pourovers. A hundred years ago, the goal was a quality product that the successful businessperson could enjoy without breaking stride. 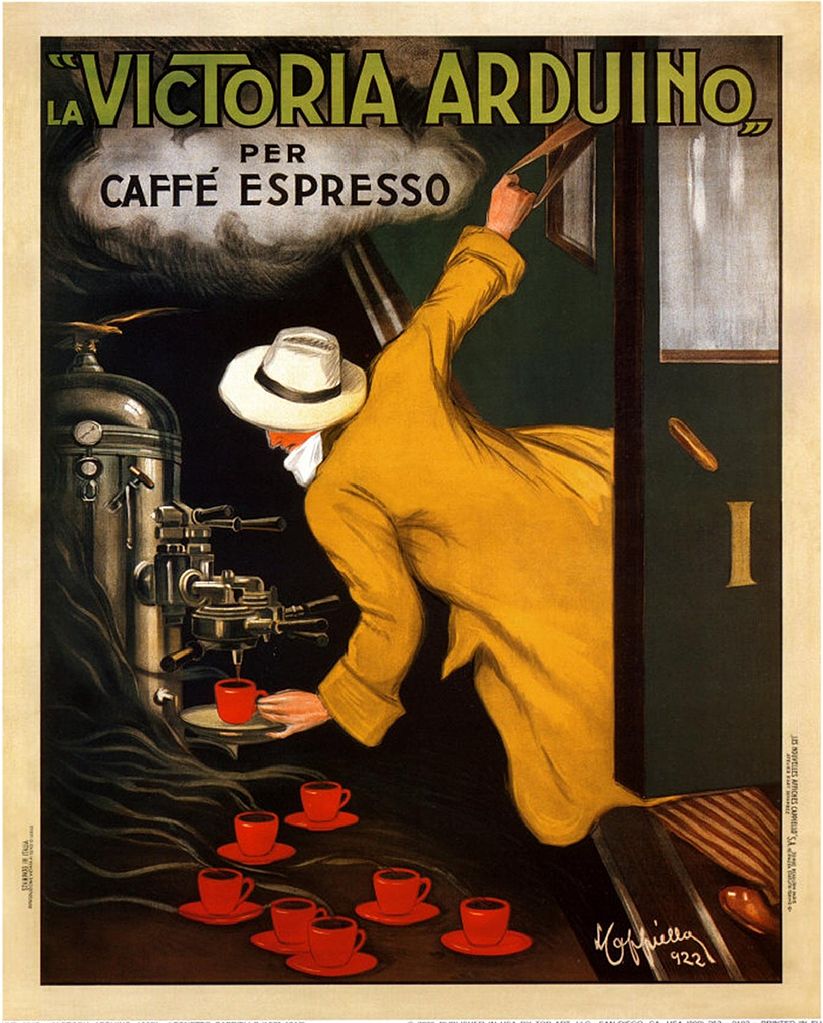 As coffee expert James Hoffmann, author of The World Atlas of Coffee points out in the above video, the Steam Age was on the way out, but Cappiello’s image is “absolutely leveraging the idea that steam equals speed.”

That had been the goal since 1884, when inventor Angelo Moriondo patented the first espresso machine (see below).

The bulk brewer caused a stir at the Turin General Exposition. Speed wise, it was a great improvement over the old method, in which individual cups were brewed in the Turkish style, requiring five minutes per order.

This “new steam machinery for the economic and instantaneous confection of coffee beverage” featured a gas or wood burner at the bottom of an upright boiler, and two sight glasses that the operator could monitor to get a feel for when to open the various taps, to yield a large quantity of filtered coffee. It was fast, but demanded some skill on the part of its human operator. 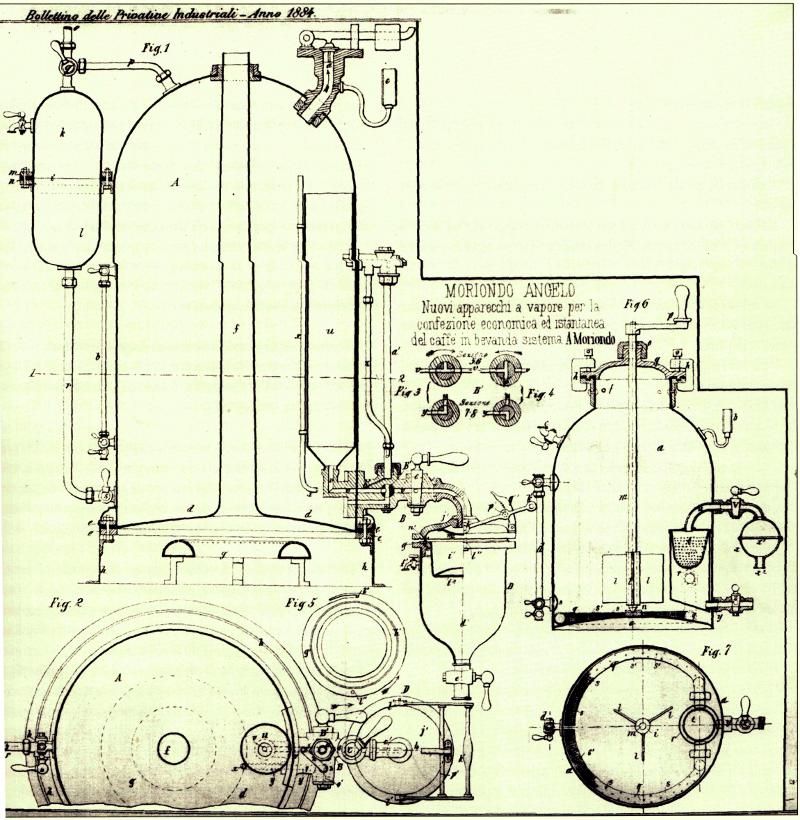 As Jimmy Stamp explains in a Smithsonian article on the history of the espresso machine, there were  also a few bugs to work out.

Early machines’ hand-operated pressure valves posed a risk to workers, and the coffee itself had a burnt taste.

Milanese café owner Achille Gaggia cracked the code after WWII, with a small, steamless lever-driven machine that upped the pressure to produce the concentrated brew that is what we now think of as espresso.

Stamp describes how Gaggia’s machine also standardized the size of the espresso, giving rise to some now-familiar coffeehouse vocabulary:

The cylinder on lever groups could only hold an ounce of water, limiting the volume that could be used to prepare an espresso. With the lever machines also came some some new jargon: baristas operating Gaggia’s spring-loaded levers coined the term “pulling a shot” of espresso. But perhaps most importantly, with the invention of the high-pressure lever machine came the discovery of crema – the foam floating over the coffee liquid that is the defining characteristic of a quality espresso. A historical anecdote claims that early consumers were dubious of this “scum” floating over their coffee until Gaggia began referring to it as “caffe creme,“ suggesting that the coffee was of such quality that it produced its own creme.

The Life & Death of an Espresso Shot in Super Slow Motion

The Bialetti Moka Express: The History of Italy’s Iconic Coffee Maker, and How to Use It the Right Way

Everything You Ever Wanted to Know about the Bialetti Moka Express: A Deep Dive Into Italy’s Most Popular Coffee Maker