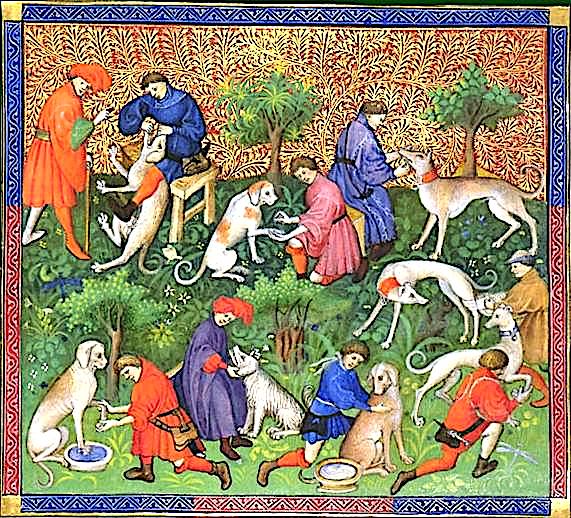 The Rovers, Fidos, and Spots of the world have been regarded since time immemorial as man’s best friends. But they haven’t always been named Rover, Fido, and Spot: early fifteenth-century English dog owners preferred to give their pets names like Nosewise, Garlik, Pretyman, and Gaylarde. Or at least the author of a fifteenth-century English manuscript thought those names suitable for dogs at the time, according to a thread posted just a few days ago by Twitter user WeirdMedieval. Other canine monikers officially endorsed by the author (whose precise identity remains unclear) include Filthe, Salmon, Havegoodday, Hornyball, and Argument, none of which you’re likely to meet in the dog park today.

The complete list of 1,065 dog names is included in David Scott-Macnab’s academic paper “The Names of All Manner of Hounds: A Unique Inventory in a Fifteenth-Century Manuscript” (or here on Imgur).

Meant to cover hunting dogs including “running hounds, terriers and greyhounds,” the compilation includes “numerous recognizable proper names, including several from history, mythology and Arthurian romance” like Absolon, Charlemayne, Nero, and Romulus. Some “have the quality of bynames or sobriquets. Some are descriptive, some are simple nouns, and others are compounds of different lexical elements.”

Dog names in the Middle Ages also came from the natural world (Dolfyn, Flowre, Fawkon), human professions (Hosewife, Tynker), and even the nationalities of Europe (Ducheman, German). You can learn more about the variety of pet names back then from this post at Medievalists.org. King Henry VIII “had a dog named Purkoy, who got its name from the French ‘pourquoi’ because it was very inquisitive.” In Switzerland of 1504, the most popular dog name was Furst (“Prince”). And as for cats, in medieval England they tended to be “known as Gyb — the short form of Gilbert,” while in France “they were called Tibers or Tibert,” named for a character in the Reynard the Fox fables. All of these sounded normal five or six centuries ago, but who among us is daring enough to reintroduce the likes of Synfull, Crampette, and Snacke into the trend-sensitive word of pet ownership in the 2020s?