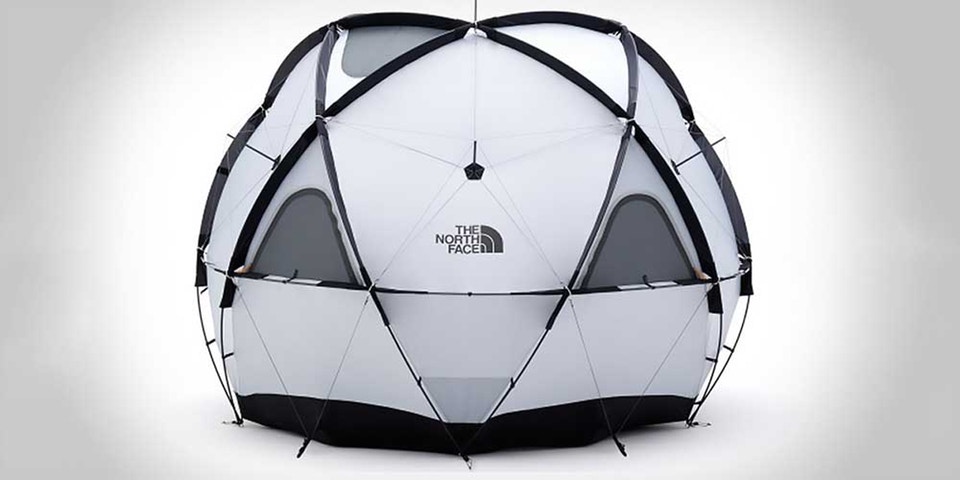 Most anyone who regularly spends time in nature knows the name The North Face. For fifty years now, the company has furnished outdoorsmen and outdoorswomen with not just apparel but much else of the equally rugged gear they might conceivably need to go hiking, camping, or permanently off the grid. Some of their product designs have remained basically the same through the decades, while others have changed dramatically. Even early in the company's life it knew that a better tent, for instance, would get the outdoorsy world beating a path to its door: hence its engagement of no less a design thinker than R. Buckminster Fuller.

Bruce Hamilton, who worked for the company from 1970 to 1989, recently wrote a few posts (part one, part two, part three) telling the story of the North Face/Buckminster Fuller connection. It began in his first year on the job, when the company's owner Hap Klopp asked a friend whose family had connections to Fuller to send the already world-famous architect-systems theorist-inventor a letter. Describing The North Face as "a small company that produces what I believe to be the finest equipment presently available," the friend asked Fuller for ideas on how to improve the "archaic designs" then used to construct tents. "I have thought a great deal in the past about your subject of the compact, lightweight, back-packable environment controlling device," Fuller replied. "I am accepting your challenge."

Hamilton, a fan of Fuller's work, had already been thinking about how to use the principles of the light but sturdy triangle-and-dome-based "tensegrity structures" Fuller so often wrote and (as in the clip above) talked about. One day Hamilton showed Klopp a model of a Fullerian geodesic sphere, and "it was at that moment that he connected me with Bucky and with his drive to bring a new tent to life." The result, the Oval Intention tent, first appeared in The North Face's Fall 1975 catalog, accompanied by a photo of Hamilton relaxing inside one and a typically sweeping quote from Fuller himself: "It is no aesthetic accident that nature encased our brains and regenerative organs in compoundly curvilinear structures. There are no cubical heads, eggs, nuts, or planets."

The North Face kept incorporating Fuller's ideas into their tents, and they hammered out the terms of  direct collaboration on a new model in 1983, a month before Fuller died. Judgments about other tensegrity structures — geodesic dome homes, for example — have varied over the years, but the Oval Intention lives on in the form of the new Geodome 4. "Thanks to the most spatially efficient shape in architecture, it can withstand winds of up to 60 mph as the force is spread evenly across the structure whilst even providing enough height for a six-foot person to stand comfortably inside," writes Archdaily's Ella Thorns. "The extremely efficient design has allowed the tent to weigh not much more than 11kg and comprise of 5 main poles and the equator for fast and easy assembly and storage."

If this already has you excited about your improved prospects for more geometrically and structurally efficient camping on the surface of our Spaceship Earth, do be warned: at the moment The North Face has only made the Geodome 4 available in Japan (see its Japanese page here), and with a price tag equivalent to $1,635 at that. Even so, one hopes that Bucky — as Hamilton and many of the others who knew him called him — looks on with pride from whichever spaceship he now finds himself aboard.