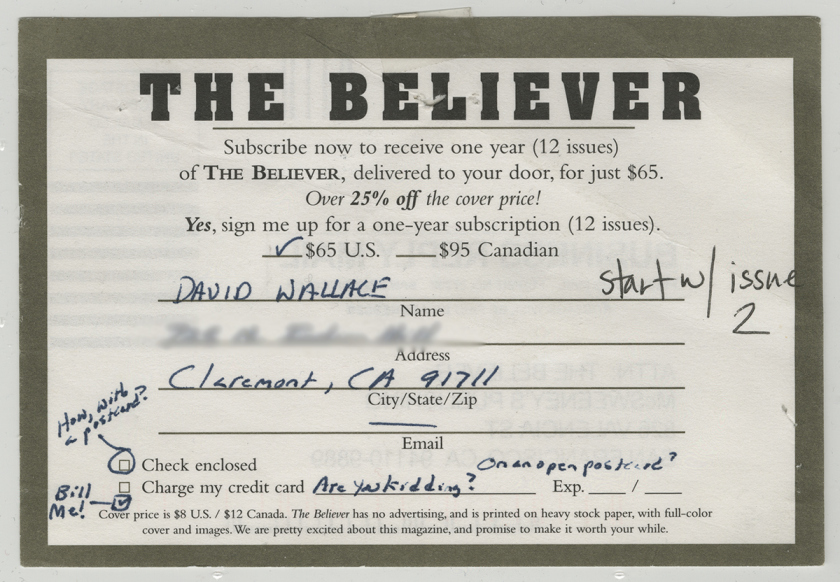 Founded by Dave Eggers in 1998, McSweeney’s initally began as a literary journal that published only works rejected by other magazines. But, almost immediately, the journal started publishing, it likes to say, “pieces primarily written with McSweeney’s in mind.” Since then, McSweeney’s has also launched McSweeney’s Quarterly and The Believer, not to mention lots of fiction, nonfiction, poetry, and children’s books.

Created in 2003, The Believer, writes the Harry Ransom Center blog, “has become a monthly art and culture magazine featuring content unimpeded by arbitrary word limits and highlighting schematic drawings, illustrations by Tony Millionaire, and regular columns by Nick Hornby, Greil Marcus, and Jack Pendarvis.” “The Believer attracts remarkable writers and remarkable readers. David Foster Wallace’s subscription postcard for The Believer is evidence that they’re sometimes both.” Foster Wallace sat down for a long interview with the magazine, and personally subscribed to the journal, filling out the subscription postcard by hand. It’s believed that the humorous postcard — click the image to view it in a larger format — once hung on the wall of The Believer‘s editor Andrew Leland. It now resides in the newly-opened McSweeney’s archive at the Ransom Center in Austin, Texas. There, visitors can also find a David Foster Wallace archive, with lots of interesting DFW material that we’ve highlighted in years past. For your convenience, we’ve highlighted a few of our favorite items right below: