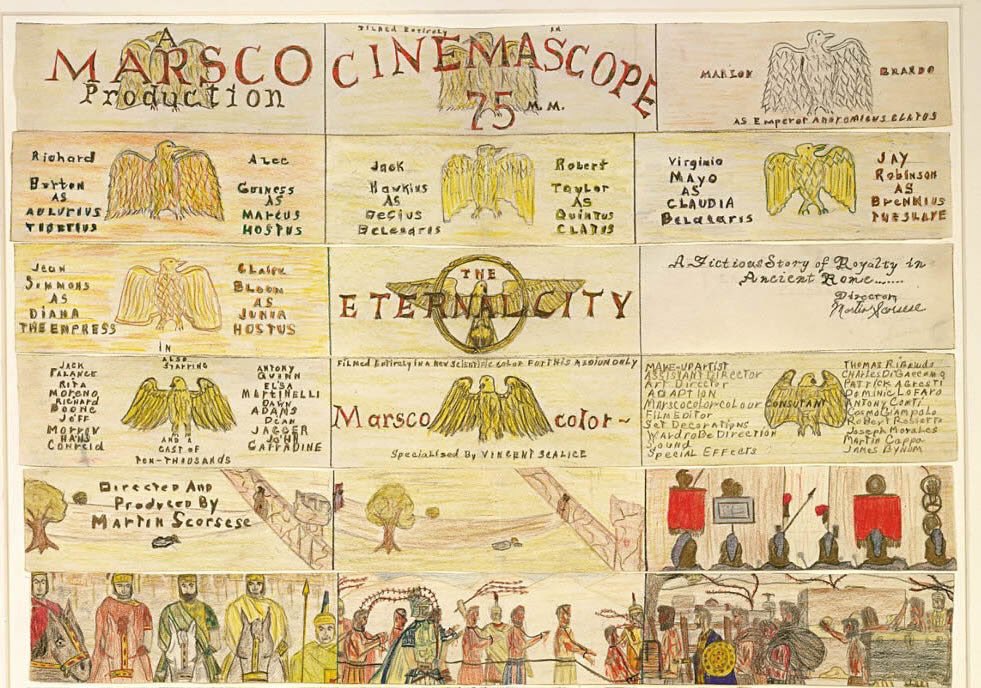 Martin Scorsese’s mean streets are as long gone as graffiti-festooned subway trains, the real Max’s Kansas City, and Yogi Berra’s pennant-winning Mets. But while the 1973 film that broke open his career is now over forty years old, Scorsese hasn’t looked back, nor has he stayed trapped in the rough milieu of New York gangster films. He’s adapted Edith Wharton, told stories of the Dalai Lama, Howard Hughes, handfuls of rock and blues stars, and cinematic hero Georges Méliès (sort of).

Last year’s The Wolf of Wall Street further cemented Scorsese’s reputation as a director with more breadth than almost any of his contemporaries. But it would perhaps be a mistake to call Scorsese’s genre-hopping an evolutionary development. The series of storyboards here for an imagined widescreen Roman epic called The Eternal City— drawn by 11-year-old Scorsese—show us that his vision always exceeded the cramped Little Italy streets of his youth.

Young Scorsese described his Cecil B. Demille-like production as “A fictitious story of Royalty in Ancient Rome,” and though he didn’t give us character names, he made sure to specify the film’s actors, casting Marlon Brando, Richard Burton, Virginia Mayo, and Alec Guinness, among others. As for Scorsese’s own role, The Independent notes, “it is striking that he has given himself a bigger credit as producer-director than any of the stars.” Reproduced in David Thompson’s series of interviews, Scorsese on Scorsese, the drawings’ impressive level of detail demonstrate a precocious eye for shot composition and the dramatic perspectives that characterize his mature work. 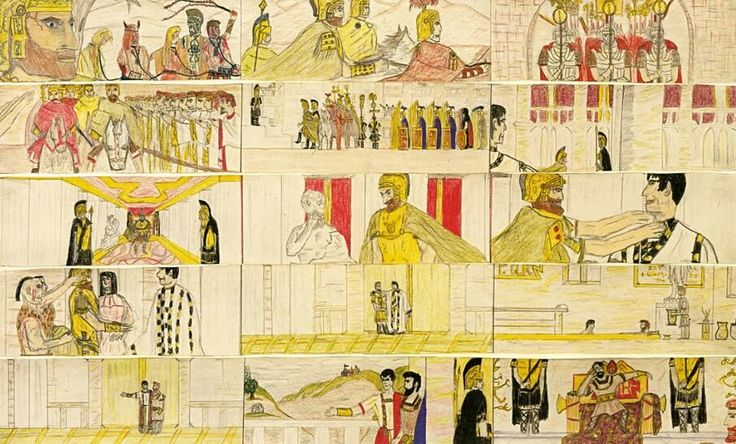 The director of such meticulously composed films as Taxi Driver and Goodfellas has had much to say about the importance of storyboards to his process. (We’ve previously featured his hand-drawn storyboards for Taxi Driver.) They are, he’s said, “the way to visualize the entire movie in advance,” to “show how I would imagine a scene and how it should move to the next.” And while many directors would make similar claims about this essential production tool, Scorsese cherishes the craft as well as the utility of the storyboard. “Pencil drawing is my favorite,” he remarks. “The pencil line leaves little impression on the paper, so if the storyboard is photocopied it loses something. I refer back to my original drawings in order for me to conjure up the idea I had when I saw the pencil line made.”

Can we look forward to Scorsese looking back, just once, to his plans for The Eternal City? He’d have to recast, of course, but given how confidently he sketches out each of his films on paper, the 71-year-old director might find much to work with in this youthful cinematic vision of antiquity.

View the storyboards in a larger format here.