If you wanted to know what life was really like in the Cold War Soviet Union, you might take the word of an émigré Russian writer. You might even take the word of Ayn Rand, as the House Un-American Activities Committee (HUAC) did during the Red Scare, though Rand had not lived in her native country since 1926. Nonetheless, as you can see above, she testified with confidence about the daily lives of post-war Soviet citizens. Rand also testified, with equal confidence, about the nefarious influence of Communist writers and directors in her adopted home of Hollywood, where she had more recent experience working in the film industry.

The 1947 HUAC hearings, writes the blog Aphelis, led to “the systematic blacklisting of Hollywood artists.” Among the witnesses deemed “friendly” to capitalism were Gary Cooper, Walt Disney, and Ayn Rand. Prior to her testimony, the FBI had consulted Rand for an enormous, 13,533-page report entitled “Communist Infiltration of the Motion Picture Industry” (find it online here), which quoted from a pamphlet published by her group:

The purpose of the Communists in Hollywood is not the production of political movies openly advocating Communism. Their purpose is to corrupt non-political movies — by introducing small, casual bits of propaganda into innocent stories and to make people absorb the basic principles of Collectivism by indirection and implication. Few people would take Communism straight, but a constant stream of hints, lines, touches and suggestions battering the public from the screen will act like drops of water that split a rock if continued long enough. The rock that they are trying to split is Americanism.

Rand and her associates helped design a “film regime” that dissected other post-war movies like William Wyler’s The Best Years of Our Lives and George Cukor’s Keeper of the Flame. These McCarthy-era film critics sought to root out “ideological termites” in the industry; they were especially distrustful of movies that elevated what Rand called, with contempt, “the little man.” One of the films identified as particularly pernicious to the “rock” of Americanism was Frank Capra’s classic It’s a Wonderful Life, a movie that today seems built on bedrock U.S. nationalist values—commitment to family, redemption through faith, contentment with modest small-town living….

Listening to Capra’s motivation for the film—as quoted in The Los Angeles Times—makes it hard to believe he had anything like promoting a worker’s paradise in mind: “There are just two things that are important,” he said, “One is to strengthen the individual’s belief in himself, and the other, even more important right now, is to combat a modern trend toward atheism.”

But in the FBI’s analysis—and possibly Rand’s, though it’s not clear how much, if any, of the report she authored directly—the tale of George Bailey manifested several subversive tendencies. Flavorwire sums up the charges succinctly: “Written by Communist sympathizers,” “Attempting to instigate class warfare,” and “Demonizing bankers.” 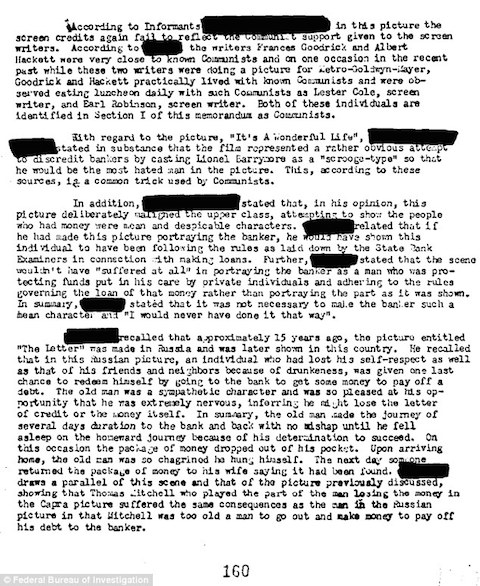 We live in odd times, such that this rhetoric—which seemed so quaint just a couple short decades or so ago—sounds jarringly contemporary again as the politics of the mid-20th century reappear everywhere. The charges against the seemingly innocuous Capra film hinged in part on the alleged Communist ties of its principle screenwriters, Francis Goodrich and Albert Hackett. In their report, part of which you can see above, the FBI wrote that the screen writers “practically lived with known Communists and were observed eating luncheon daily with such Communists as Lester Cole, screen writer, and Earl Robinson.” Palling around, as it were.

In addition to naming the writers’ acquaintances and lunch buddies, the report quotes a redacted individual who “stated that, in his opinion, this picture deliberately maligned the upper class.” Another blacked-out source “stated in substance that the film represented a rather obvious attempt to discredit bankers by casting Lionel Barrymore as a ‘scrooge-type’ so that he would be the most hated man in the picture. This, according to these sources, is a common trick used by Communists.” Finally, a third redacted source compares the plot of Capra’s movie with that of a Russian film called The Letter, screened in the U.S. fifteen years earlier.

We cannot say for certain, but it’s reasonable to assume that many of these hidden FBI sources were associates of Rand. In any case, Rand—in vogue after the success of her novel The Fountainhead—appeared before HUAC and re-iterated many of the general claims made in the report. During her testimony, she focused on a 1944 film called Song of Russia (you can hear her mention it briefly in the short clip at the top). She chiefly critiques the film for its idealized portrait of life in the Soviet Union, hence her enumeration of the many evils of actual life there.

Curiously, many critical treatments of It’s A Wonderful Life have said more or less the same thing of that work, calling the film “sentimental hogwash,” for example, and a representative of “American capitalist ideology.” These readings seem persuasive to me, but for those like Rand and her followers, as well as J. Edgar Hoover and his paranoid underlings, no film it seems—no matter how celebratory of U.S. nationalist mythology—could go far enough in glorifying heroic capitalists, ignoring class conflict, and minimizing the struggles of “the little man.”

As Raw Story notes, testimony from others at the HUAC hearings brought “redemption of an odd sort” for Capra’s movie, which “has been more than redeemed as it slowly became a sentimental and beloved holiday perennial.” But even if It’s A Wonderful Life may now look like apple pie on celluloid, Flavorwire points out that it’s still liable to raise suspicions among certain aggressive pundits and culture warriors who push a “war on Christmas” narrative and see socialist subversion even in acts of charity, like those displayed so extravagantly in the film’s mushy ending (above).

It’s A Wonderful Life “is a holiday movie that doesn’t mention Christmas until the 99-minute mark…. It takes a mostly secular reading of the holiday as a time to take stock of your life, of the true blessings of family and friends. To those obsessed with the preferred holiday greeting or the color of Santa’s skin… this must sound like quite the Communist subversion indeed.”

Read much more about the HUAC investigation of Hollywood at Aphelis, who include links to a redacted version of the FBI “Communist Infiltration” report and many other fascinating documents.

The CIA’s Style Manual & Writer’s Guide: 185 Pages of Tips for Writing Like a Spy