Having just begun rewatching season 3 of the always-relevant The Wire—the season to first introduce Reg E. Cathey’s super-smooth character, mayoral aide Norman Wilson—I was delighted to find an episode of Studio 360 that features the actor reading a text by jazz great Charles Mingus. Even more delightful is the subject of his text: instructions for toilet training your cat. I cannot testify to their efficacy; it seems like a labor-intensive process, and my own cats seem pretty content with their litterbox. But if anyone could accomplish such a feat, it was Mingus, a man who once ripped the strings from a piano with his bare hands (so it’s said in the documentary 1959: The Year that Changed Jazz), and who won a Grammy for an essay defining jazz, written just a few years after he helped redefine it.

Mingus may have had a notoriously short temper, but as a composer, he was infinitely patient. Apparently this also goes for his role as a cat trainer. He spent weeks teaching his cat, Nightlife, to use human facilities, and detailed the process in a pamphlet, The Charles Mingus CAT-alogue for Toilet Training Your Cat, available for cat fanciers and Mingus fans by mail order.

Hear Cathey read the instructions in part in the video at the top and in full in the audio above. Studio 360 describes this odd document as “full of charming advice and meticulous pedagogical detail.” It is indeed that. In four concise steps, Mingus lays out the program, simple as can be—or so he makes it seem. 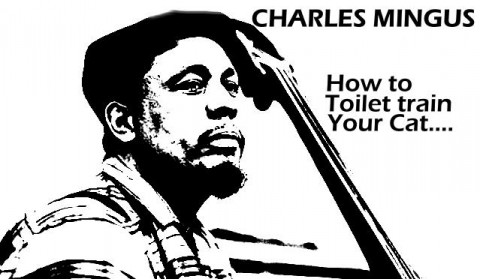 Mingus writes, “It took me about three or four weeks to toilet train my cat, Nightlife.” He also admits that aspiring trainers may need to modify the program somewhat, “in case your cat is not as smart as Nightlife was.” One can imagine less gifted cats struggling with this unusual method. One can also imagine more ornery, less cooperative breeds simply refusing to play along. Like Mingus himself, cats have a well-deserved reputation for doing their own thing. Should you be intrepid enough to attempt the Mingus method with your own feline companion, all I can say to you is what Mingus says at the end of his instructions—Good Luck.

Charles Mingus and His Eviction From His New York City Loft, Captured in Moving 1968 Film