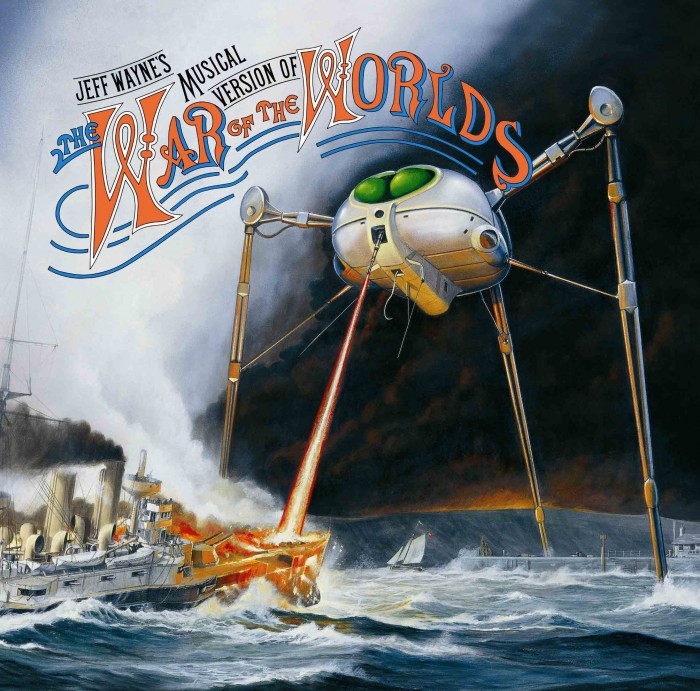 Since the 1950s at least, Americans have embraced science fiction of all kinds—from the high concepts of 2001 to the high kitsch of Barbarella—even if sometimes only among devoted cult fans. The Queen-scored Flash Gordon, for example, did not do well in U.S. theaters on its release in 1980, though it was a hit in the UK. But not long after, its iconic, pulsing theme song, with its operatic blasts, became an unmistakable callback to the final days of 70s rock opera’s glorious excesses.

And yet somehow, another equally bombastic sci-fi rock opera produced in 1978, Jeff Wayne’s musical adaptation of H.G. Wells’ War of the Worlds, has been denied proper cult status in the States. At the time of its release, U.S. audiences, primed by the previous year’s colossal hit, Star Wars, perhaps sought more swashbuckling fare, not prog-rock double concept albums based on classic novels. American indifference, however, in no way hindered the album’s popularity abroad.

According to its clunky website, Wayne’s adaptation, “is one of the best known and best-selling musical works of all time.” This is no empty boast; it had “sold approximately 15 million records around the world” by 2013 and in 2009 was named the 40th best-selling album ever. And for good reason! While you may never have heard of Wayne—he wrote music for TV commercials for much of his career, and once struck it big by producing David Essex’s 1973 hit “Rock On”—you know the “cast” of his War of the Worlds.

Supplementing the album’s musical charms, and they are many, the original LP also came “packaged in a gatefold with a book containing the complete script and some awesome paintings, mostly by noted Lord of the Rings cover artist Geoff Taylor.” For many of us, Jeff Wayne’s War of the Worlds will seem like a lost masterpiece, a brilliantly kitschy sci-fi, prog-disco classic that never got its due. For fans, however, in “no less than 22 countries,” as the album’s site proclaims, where it charted, reaching number one in half of them, the strangely inspired rock opera may well be very familiar.

You can hear the complete double LP at the playlist above (or click here), along with two more “sides” of alternates, outtakes, and demos. (If you need Spotify, download it here.) One of the songs, Hayward’s “Forever Autumn,” above, was originally written for a “late-‘60s LEGO commercial,” but warranted inclusion because “Wayne simply wanted a ballad to be included.” The move is typical of his more is more production approach to War of the Worlds, and yet, somehow, it all comes together into an engrossing experience. For some reason, in 2012, Wayne decided to remake the album, with Liam Neeson taking on the narration duties. Judging by its Amazon reviews, the new version is just as beloved by many fans as the old.