Philosophers, technologists, and futurists spend a good deal of time obsessing about the nature of reality. Recently, no small number of such people have come together to endorse the so-called “simulation argument,” the mind-boggling, sci-fi idea that everything we experience exists as a virtual performance inside a computer system more sophisticated than we could ever imagine. It’s a scenario right out of Philip K. Dick, and one Dick believed possible. It’s also, perhaps, terminally theoretical and impossible to verify.

So… where might the perplexed turn should they want to understand the world around them? Are we doomed to experience reality—as postmodern theorist Jean Baudrillard thought—as nothing more than endless simulation? It’s a little old-fashioned, but maybe we could ask a scientist? One like physicist, science writer, educator Dominic Walliman, whose series of short videos offer to the layperson “maps” of physics, math, and, just above, chemistry.

Walliman’s ingenious teaching tools excel in conveying a tremendous amount of complex information in a comprehensive and intelligible way. We not only get an overview of each field’s intellectual history, but we see how the various subdisciplines interact.

One of the oddities of chemistry is that it was once just as much, if not more, concerned with what isn’t. Many of the tools and techniques of modern chemistry were developed by alchemists—magicians, essentially, whom we would see as charlatans even though they included in their number such towering intellects as Isaac Newton. Walliman does not get into this strange story, interesting as it is. Instead, he begins with a prehistory of sorts, pointing out that since humans started using fire, cooking, and working with metal we have been engaging in chemistry.

Then we’re launched right into the basic building blocks—the parts of the atom and the periodic table. If, like me, you passed high school chemistry by writing a song about the elements as a final project, you may be unlikely to remember the various types of chemical bonds and may never have heard of “Van der Waals bonding.” There’s an opportunity to look something up. And there’s nothing wrong with being a primarily auditory or visual learner. Walliman’s instruction does a real service for those who are. 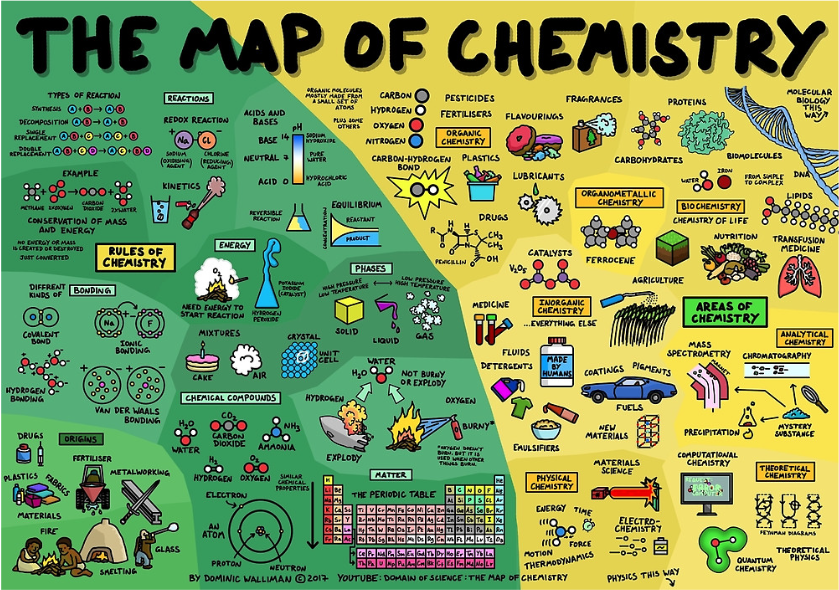 Walliman moves through the basics briskly and into the differences between and uses of organic and inorganic chemistry. As the animation pulls back to reveal the full map, we see it is comprised of two halves: “rules of chemistry” and “areas of chemistry.” We do not get explanations for the extreme end of the latter category. Fields like “computational chemistry” are left unexplored, perhaps because they are too far outside Walliman’s expertise. One refreshing feature of the videos on his “Domain of Science” channel is their intellectual humility.

If you’ve enjoyed the physics and mathematics videos, for example, you should check back in with their Youtube pages, where Walliman has posted lists of corrections. He has a list as well on the chemistry video page. “I endeavour to be as accurate as possible in my videos,” he writes here, “but I am human and definitely don’t know everything, so there are sometimes mistakes. Also, due to the nature of my videos, there are bound to be oversimplifications.” It’s an admission that, from my perspective, should inspire more, not less, confidence in his instruction. Ideally, scientists should be driven by curiosity, not vanity, though that is also an all-too-human trait. (See many more maps, experiments, instructional videos, and talks on Walliman’s website.)

In the “Map of Physics,” you’ll note that we eventually reach a gaping “chasm of ignorance”—a place where no one has any idea what’s going on. Maybe this is where we reach the edges of the simulation. But most scientists, whether physicists, chemists, or mathematicians, would rather reserve judgment and keep building on what they know with some degree of certainty. You can see a full image of the “Map of Chemistry” further up, and purchase a poster version here.