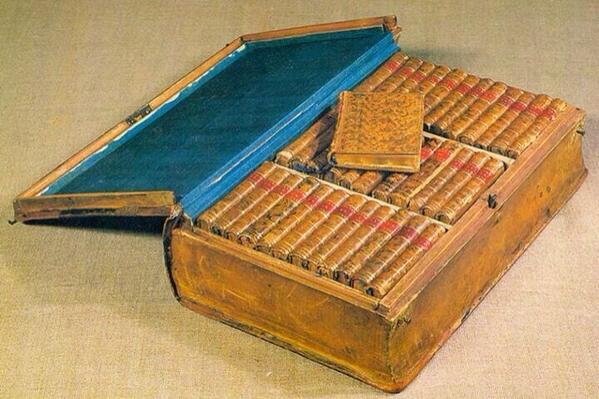 Every piece of technology has a precedent. Most have several different types of precedents. You’ve probably used (and may well own) an eBook reader, for instance, but what would have afforded you a selection of reading material two or three centuries ago? If you were a Jacobean Englishman of means, you might have used the kind of traveling library we featured in August, a handsome portable case custom-made for your books. (If you’re Tom Stoppard in the 21st century, you still do.) If you were Napoleon, who seemed to love books as much as he loved military power — he didn’t just amass a vast collection of them, but kept a personal librarian to oversee it — you’d take it a big step further.

“Many of Napoleon’s biographers have incidentally mentioned that he […] used to carry about a certain number of favorite books wherever he went, whether traveling or camping,” says an 1885 Sacramento Daily Union article posted by Austin Kleon, “but it is not generally known that he made several plans for the construction of portable libraries which were to form part of his baggage.” The piece’s main source, a Louvre librarian who grew up as the son of one of Napoleon’s librarians, recalls from his father’s stories that “for a long time Napoleon used to carry about the books he required in several boxes holding about sixty volumes each,” each box first made of mahogany and later of more solid leather-covered oak. “The inside was lined with green leather or velvet, and the books were bound in morocco,” an even softer leather most often used for bookbinding.

To use this early traveling library, Napoleon had his attendants consult “a catalogue for each case, with a corresponding number upon every volume, so that there was never a moment’s delay in picking out any book that was wanted.” This worked well enough for a while, but eventually “Napoleon found that many books which he wanted to consult were not included in the collection,” for obvious reasons of space. And so, on July 8, 1803, he sent his librarian these orders:

The Emperor wishes you to form a traveling library of one thousand volumes in small 12mo and printed in handsome type. It is his Majesty’s intention to have these works printed for his special use, and in order to economize space there is to be no margin to them. They should contain from five hundred to six hundred pages, and be bound in covers as flexible as possible and with spring backs. There should be forty works on religion, forty dramatic works, forty volumes of epic and sixty of other poetry, one hundred novels and sixty volumes of history, the remainder being historical memoirs of every period.

In sum: not only did Napoleon possess a traveling library, but when that traveling library proved too cumbersome for his many and varied literary demands, he had a whole new set of not just portable book cases but even more portable books made for him. (You can see how they looked packed away in the image tweeted by Cork County Library above.) This prefigured in a highly analog manner the digital-age concept of recreating books in another format specifically for compactness and convenience — the kind of compactness and convenience now increasingly available to all of us today, and to a degree Napoleon never could have imagined, let alone demanded. It’s always good to be the Emperor, but in many ways, it’s better to be a reader in the 21st century.