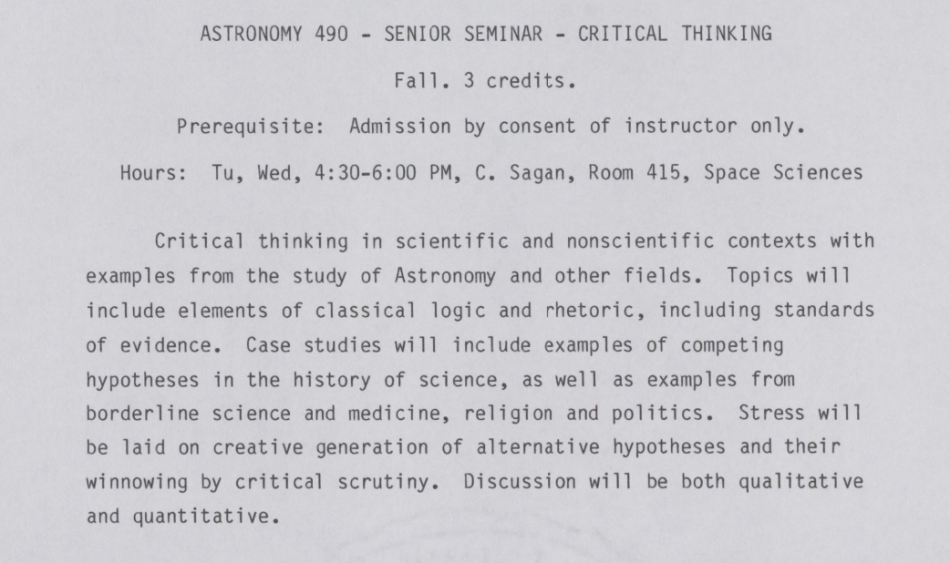 Though now more than twenty years gone, Carl Sagan, through his many books and his classic television series Cosmos, continues to teach us all he knew about life, the universe, and everything. Three decades’ worth of students will also remember learning from him in person, in the lecture halls of Harvard and Cornell where he kept up his professorial duties alongside the considerable demands of his career as a public intellectual. If you’ve ever learned anything from Sagan, whether from the man himself or from his work, you know he didn’t just want to teach humanity about outer space: he wanted to teach humanity how to think.

That goal became explicit in Astronomy 490, also known as “Critical Thinking in Science and Non-Science Context,” which Sagan taught at Cornell in 1986. You can read its course materials at the Library of Congress, whose Jennifer Harbster writes that they “include mention of the important balance between openness to new ideas and skeptical engagement with those ideas in science,” a point that “animates much of Carl Sagan’s work as an educator and science communicator.”

The LoC offers the course’s introduction and syllabus, its final exam, and Sagan’s lecture notes, as well as the information he assembled to design the course in the first place, which show just how wide a range of contexts for critical thinking he had in mind.

Sagan collected examples of reporting on and public perception of phenomena related to sports playoff series, car-loan interest rates, tobacco industry-sponsored tobacco health-risk research, and the number of helicopters that crash in Los Angeles. Harbster explains that “these notes illustrate how he wanted to use students’ every day experience with things like television to prompt them to think more skeptically about how claims are made and warranted in everyday life.” Though some of his examples  (the language of cigarette advertisements, for instance) may look dated now, the course’s core principles have only grown more useful, and indeed necessary, with time — as Sagan, who wrote darkly of “the slow decay of substantive content in the enormously influential media,” surely knew they would.