Behold the Original Deck of Oblique Strategies Cards, Handwritten by Brian Eno Himself 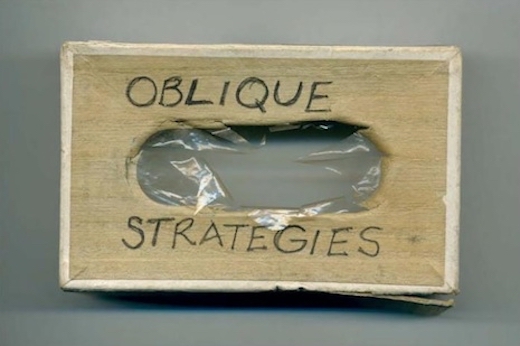 “Honor thy error as a hidden intention.” “Work at a different speed.” “Try faking it!” These suggestions will sound familiar to everyone who’s ever flipped through the deck of cards known as Oblique Strategies. You can now do that digitally, of course, but Oblique Strategies remains an essentially physical experience, one whose shuffling and drawing reminds the user that they’re drawing from the well of chance for a way to break them through a creative impasse or just rethink part of a project. It also began as thoroughly a physical experience, invented by producer-artist-ambient musician Brian Eno and painter Peter Schmidt, who first came up with them in the pre-digital days of 1974. 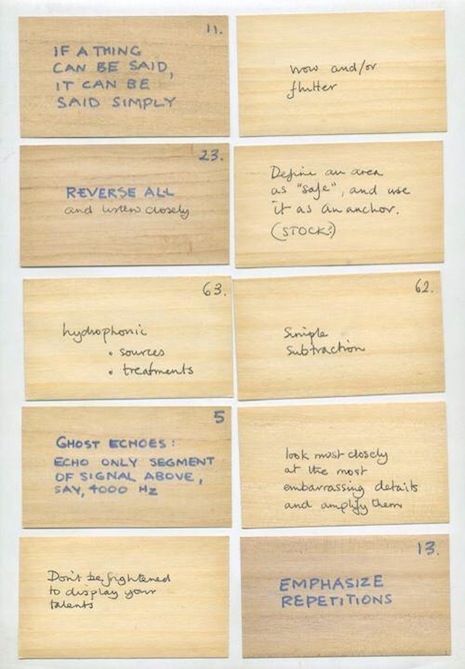 Back then, writes Dangerous Minds’ Martin Schneider, the concept for Eno and Schmidt’s “set of 115 cards with elliptical imperatives designed to spark in the user creative connections unobtainable through regular modes of work” emerged as a form of “radical intervention with roots in Eastern philosophy.”

Having first come on the market in the 1970s, Oblique Strategies has gone through several different production runs, usually packaged in handsome boxes with the deck’s name emblazoned in gold. “The first four editions are out of print and collector’s items (and priced to match). The 5th edition is currently available from Eno’s website for £30 (about $50). In 2013 a limited 6th edition of 500 numbered sets were available but quickly sold out.” At this moment, you can find one imported set on Amazon. 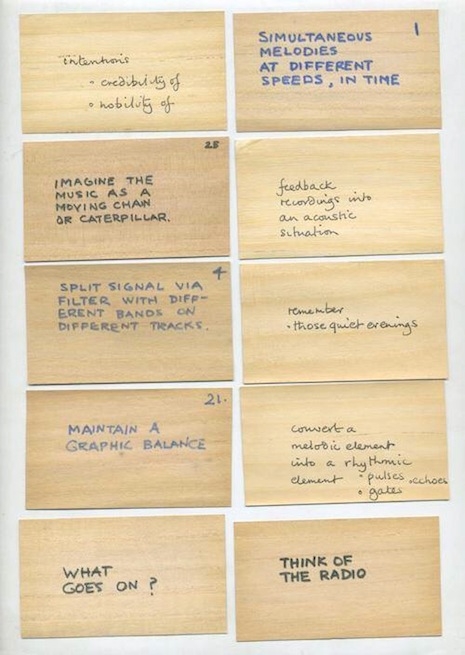 But it seems that the very first set of Oblique Strategies, featured in Schneider’s post, is unavailable at any price. Written in Eno’s own hand, sometimes cursive and sometimes block, on cards with a wooden-looking texture and without the rounded corners that characterize the commercial version, these first Oblique Strategies include “Don’t be frightened to display your talents,” “If a thing can be said, it can be said simply,” and “Do we need holes?” Those who have followed Eno’s work will surely appreciate in particular the card that says to “use non-musicians,” “non-musician” being one of Eno’s preferred titles for himself, especially when working in a musical capacity. The total package of Oblique Strategies may have grown more refined over the years, but this handmade first set does have a certain immediacy, and also, in a sense, the imprimatur of history: after all, they worked for Brian Eno.